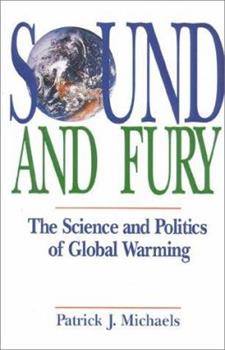 Sound and Fury: The Science and Politics of Global Warming

Attacks the scientific basis for the theory of global warming. This description may be from another edition of this product.

The "critics" below have not read this book.

Published by Thriftbooks.com User , 18 years ago
In spite of the age of the book, I use this as a supplemental text to teach scientific method: skepticism and the demanding of proof. I find it fascinating that people who have not read the book opt to write a review of it. There are three - all one star - below, under the titles "One Amplified Voice", "Predictable" and "Corporate Propaganda."Michaels explains that climate, which is defined as 30 years, and not to be confused with weather events, changes continuously. But climate has an estimated five million variables. That gives enough argumentation was to why public policy based on models, especially unproven ones, is a bad idea. Models have ten to three dozen variables. Michaels is proven right by the inaccuracy of predictions of the models, by the time the book came out and even more since. Michaels includes one model annecdote which was to run in reverse: predict what will happen in the next ice age. The bias was so strong, that while Chicago was buried under thousands of feet of ice, the polar ice cap still melted. He also quote a GW proponent when confronted with models' inaccuracy, "The data don't matter." But apparently, the models do matter when they disagree with the data; pure non sequitur.Michaels leads the reader in layman's terms: why we are so uncertain, and why there is a likely chance to see hemispheric, rather than global warming, why it will probably be seasonal, why gradual warming may be more dangerous than rapid, what we know versus the Popular Vision, and why even if all of this comes to pass, it is not a panacea. I won't give away, or take the space on the former points, but on the last I will. A less hot summers, less cold winters climate would also be a utopia for insects. Note that Michaels does not speak with certainty but in reasoning and probability of proper science. This quite the opposite of the non- and anti-scientific method types with their absolutes, best understood as proselytism.Michaels is also quite polite. For example, The Challenger shuttle disaster was in 1987. Congress was questioning all aspects of NASA, and future funding of it in 1988. NASA, before Congress, tin cup in hand, was in trouble and proposed needing funding for the study of the probablility of GW as a way to maintain political survival more than scientific. Michaels does not mention Challenger or NASA's predicament. He picks up with the congressional testimony, the sceintifically illiterate media picking up on it - just listen to CNN today - and the birth of the Popular Vision. Michaels acknowledges the strong possibility of some type of warming. Note again three negative reviews that claim he denies it. If one has any interest in the subject of GW or in understanding proper scientific method, I assign this one because I have yet to find another that is better.

Published by Thriftbooks.com User , 22 years ago
I Read "Sound and Fury" and I just can't wait for his second book, entitled "Satanic Gases" to hit the shelves. The first was a well written book that ignores the media hype and gives the readers the facts. Keep up the good work!

Published by Thriftbooks.com User , 23 years ago
A momentous dispute continuies between the data-driven climatologists and the modelers, and Patrick Michaels brings that dispute into clear perspective. With painstakingly researched evidence, he persuasively argues against the global warming hysteria. The science is good and the writing style is entertaining, especially if you are skeptical of "the popular vision" or are prepared to listen with an open mind. Recommend highly to everyone, especially politicians, greenpeace folks, and UN representatives to the IPCC.

Published by Thriftbooks.com User , 23 years ago
the previous review shows you how much the greens fear real science. The fact is that the greens misinterpret the sattelite data on purpose because it doesn't fit the political purposes of the movement. Everyone should read this book.(and as for the part about corporate propoganda: let me remid everyone that argument against authority is just as flawed as argumenmt from authority)

Published by Thriftbooks.com User , 24 years ago
Patrick Michaels is world renowned for his knowledge in this field and has put together a great book that leaves the hysteria out and gives people what they deserve a book based on science not politics
Trustpilot
Copyright © 2022 Thriftbooks.com Terms of Use | Privacy Policy | Do Not Sell My Personal Information | Cookie Preferences | Accessibility Statement
ThriftBooks® and the ThriftBooks® logo are registered trademarks of Thrift Books Global, LLC