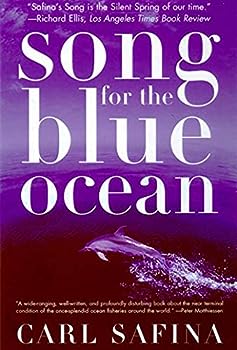 Song for the Blue Ocean: Encounters Along the World's Coasts and Beneath the Seas

Part odyssey, part pilgrimage, this epic personal narrative follows the author's exploration of coasts, islands, reefs, and the sea's abyssal depths. Scientist and fisherman Carl Safina takes readers... This description may be from another edition of this product.

Published by Thriftbooks.com User , 18 years ago
I'm only about halfway through this book, but it's so moving that I decided I needed to rave now. Carl Safina uses an amazing grasp of language to paint mental pictures of what he writes about. I work in the scientific community and have spent a lot of time on that water, and his writings are not only objective and scientifically sound, he constructs them in such a way that they are beautiful. You will have a thirst for each topic and region of which he writes. I borrowed this book from the library and had vowed to buy it before I'd finished the first chapter. It has only improved as I've proceeded.

Published by Thriftbooks.com User , 21 years ago
Is it a novel, a journey through the seas, or a scientific work describing the demise of fishes around the world while offering policy suggestions? It doesn't matter what kind of book it is- it may be all in one. What matters is that Carl Safina has written a book, Song for the Blue Ocean, which tells the story of living oceans; a book that catches your attention through adventure and interesting characters, witty writing, strong emotion, and terse opinions strewn amongst simple science. In the preface, Safina mentions that he will be our guide and interpreter, but ultimately we have to make our own decisions regarding what the oceans and their inhabitants really mean to us. Nonetheless, I feel quite comfortable following Safina's lead. After receiving his doctorate in ecology and starting a career as an academic, Safina decided that he needed to take a stronger stand on conservation and scientific policy regarding the world's imperiled fish. He founded and now directs the National Audubon Society's Living Oceans Program, and wrote Song for the Blue Ocean merely 10 years after graduate school. Safina has a unique and open perspective on the state of the world's fishes, once as a commercial and sport fisherman, and now as a world-renowned scientist. Personally, I feel quite comfortable allowing Safina's guide and interpretations to influence my own opinions.Song for the Blue Ocean is split into three distinct sections: the Northeast, the Northwest, and the Far Pacific. In addition, each section focuses on an imperiled species, namely the Giant Bluefin Tuna, pacific Salmon, and coral reefs; nonetheless, Safina is able to depict the bigger picture of the world's fisheries and common problems with these three examples. Not only does the reader get an inside look at fishing culture and the conservationist culture, but we also learn about the bigger picture of fisheries, i.e. externalities of fishing like by-catch, various fishing styles (from spear fishing to cyanide poisoning), the state of these fisheries, and the huge political aspects of fishing. Safina artfully intertwines information about national and international agencies involved in the conservation of fisheries, like CITES and the Endangered Species Act, without it sounding like a lecture. We learn about various species of sponges and coral reef fish, or the difference between steelhead trout and Chinook salmon, during the while we are enchanted by Safina's adventures floating down an icy Northwest river or almost dying of nitrogen narcosis while SCUBA diving 160 feet deep in the Palau islands.The book flows very smoothly. Safina builds up the story, grasps ahold of your attention, and then leads you through the steps until he has made his point clear. For instance, Safina talks of the beautiful large and diverse trees in the Pacific Northwest, then introduces the concept of a snag- a tree that has died, but continues to stand upright for many years. Once it finally falls, hun

A Call to Action

Published by Thriftbooks.com User , 22 years ago
Magnificently written by a world-class scientist and gifted communicator -- a fortunate combination that might be as rare as some of the wondrous marine animals and habitats he describes. I am a landlubber businessman who, until I read this book, merely had a spectator's idle interest in the fate of the world's fisheries and marine environments. Dr. Safina eloquently convinces the reader how directly connected we all are to the world's oceans for the well-being of our purses, our physical bodies and our spirits.Safina doesn't merely describe and bemoan the degradation of the seas and marine life. He objectively (well, as objectively as he can) examines the issues from the broad perspectives of those who rely upon these wild animals for subsistence, for profit and for enjoyment (that just about covers 6 billion or so people). In light of the abundant intellectual honesty Safina brings to the task, even the most skeptical reader will conclude that the oceans and their denizens are in a bad way, portending serious consequences for all of us, no matter what our agenda (and even for those of us who, like myself once, don't think we even have a marine agenda).Safina says we have options, that the destruction so far is not completely irreversible and that further destruction is not inevitable. I came away from this book thinking not only that something has to be done, but asking myself how I can help do it.

One of the most important books of the 90s

Published by Thriftbooks.com User , 23 years ago
I cannot, absolutely cannot, stress of how much import this book is. Safina writes of politics, poverty, economics, history, technical minutiae, and biological science with the flair of a poet - combined with passages that will make you weep for their ability to communicate the visceral experience of what it's like beneath the water. It's not just a book about marine biology - it's an extended essay on the forces that have shaped civilization at the end of the millennium and its relation to the world at large. The hardest thing is to get across how compulsively readable it is - digressions into issues involving privitization of land and the beuracratical nightmare of listing a species as endangered are communicated so lucidly, cleverly, and with such humanity that the book never devloves into that category called boring that would cause most people to skip it. Having grown up in the Pacific Northwest, I wish everyone in that region would read Safina's exhaustive overview of the destruction of the salmon fisheries. Only now, later in life, do I have a clear picture of what those headlines I saw as a kid even meant.And somewhere within all this, you discover that not only is Safina an objective scientist, an environmentalist who cares for the well being of other humans and is actually concerned for the plight of those who make their living off the seas; he is also a gifted writer.I kid you not. This is a book about marine science. It made me bawl like a baby. It is, despite it's complex issues, so innately human. And that's what makes it essential. Safina is no tree hugging environmentalist - he appraises it with a keen eye for its beauty and its terror but is also a firece guardian - of the system which allows us to live with it. He has extraordinary empathy for those right minded individuals who have lost their jobs due to overfishing and the political nightmare that has followed. What provokes his anger is how that system is abused; and what emerges is that it is never a case of the usual solutions that pit conservationist vs. fisherman - it is a case of the entire economic situation we live in writ large that has led to our abuse of the oceans.And despite the unrelenting nightmare you face during his journey, as it seems the whole ocean is vanishing before your eyes; there is hope, in the unlikeliest of places and his ability to essay that hope is miraculous and affirming.Howard Hall, the legendary underwater photographer, said something like: if you were to start diving today you'd see a world you couldn't imagine... But it's nothing like what you would have seen only thirty years ago. I think any sceptic, or even the most hardened of political conservatives who believe the environment is designed to withstand relentless punishment, cannot disregard the arguements made in the book. I started diving only recently. I'm a young guy. Chances are I won't be able to ever see the great coral reefs of the South P
Trustpilot
Copyright © 2022 Thriftbooks.com Terms of Use | Privacy Policy | Do Not Sell or Share My Personal Information | Accessibility Statement
ThriftBooks® and the ThriftBooks® logo are registered trademarks of Thrift Books Global, LLC