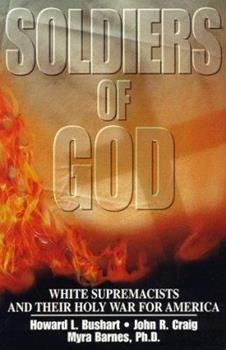 Soldiers of God: White Supremacists and Their Holy War for America

A report on the activities, organization, and beliefs of America's white supremacists exposes their threat to the nation's stability.

Published by Thriftbooks.com User , 20 years ago
The authors of the book take a neutral stance on these white supremacists. They present their ideas without actually condoning them. They have a reserved sympathy for these people since the authors live in the rural conservative culture of Texas that breeds this sort of extremism. They also mention that they had repugnance towards some of the ideas presented, but avoided editorial comments as part of their deal with the extremists. Many racial extremists have the religious theology of an antisemitic variety of Christian Identity. They interpret the scriptures to mean that whites are actually the chosen people and the Jews are the seed of Satan. They believe that the stone of destiny that the monarchs in England swear themselves upon when being enthroned is Jacob's pillar in the Bible because English tradition says so. Not all Identity Christians are anti-semitic though.The extremists are firm believers in conspiracy theories involving the Jews and their Gentile freemason cohorts. They believe everything is controlled by ZOG (Zionist Occupied Government) and that the Jews and freemasons involved shape society to their own benefit and to the detriment of the white population.The authors do not sanitize their accounts of what the extremists truly believe. They believe in the elimination of homosexuals, Jews, race mixers, and the unproductive. Some of their beliefs on these matters are influenced by their interpretation of the Scriptures. (The more violent, younger and secular Neo-Nazi gangs believe in elimination of the unproductive.) The religious racists see themselves as soldiers of God in a righteous fight against what they see as evil. These religious beliefs make them very committed and sometimes they will attempt violence or lawbreaking to achieve their goals of having a Christian theocracy. They believe they are at war with a corrupt government that needs to be overthrown. However, they think that Timothy McVeigh was actually a government agent that worked to put the blame on racial extremists for OKC bombing and to create an incident to pass an anti-terrorists bill targeted against patriots. They have problems with the theory of racial equality since they think affirmative action is used to promote people who do not merit the position and that blacks often make formerly all-white neighborhoods crime zones.The authors do not try to confirm or deny any of the many conspiracy theories that they believe in and I think that this is weakness to the book. The racial extremists have a battle strategy of leaderless resistance in which they form a small group of no more than seven people who know each other well. This strategy guards against infiltrators because the group remains very quiet about what they plan to do. They plan to have hundreds of these groups who will reek havoc upon what they see as ZOG controlled society as they attempt to implement a revolution. I view the group as ultra conservatives with unorthodox Christian beliefs that do no

Fascinating, authoritative, down to earth

Published by Thriftbooks.com User , 22 years ago
Fueled by exploding events at Waco, Ruby Ridge, the Freeman fiasco in Montana, and energized by the Okahoma City bombing, there are a number of groups right in your own back yard, especially if you live in Texas, Arkansas, Montana, Arizona or other conservative states, who are intent on waging a holy war against the government and the ever-darkening face of the United States. Howard and Myra put their lives on the line to gain this information,which they present in objective, clear prose based on the facts. Learn who the white supremacists are and what they have in store for America. [Great pictures, too.]

Out There with the Soldiers of God

Published by Thriftbooks.com User , 22 years ago
SOLDIERS OF GOD: WHITE SUPREMACISTS AND THEIR HOLY WAR FOR AMERICA is an excellent introduction for anyone who would like basic information about the extreme right-wing white racist groups in the U.S. The authors took pains to win the trust of leaders and participants in such organizations as the Ku Klux Klan, Aryan Nations, and others holding the fundamental belief that America was created by and for the white race. The corollary to this belief is that their inheritance is currently under attack by a government (usually described by them as Jewish-controlled) bent on subverting white racial purity and true Christian values. The authors spent a good deal of time attending meetings, rallies, and social events sponsored by the groups under study, as well as conducting extensive interviews with their leaders and reading widely in the printed and online material produced by them. Bushart, Craig, and Barnes do an admirable job of carrying out their intent to present the belief systems and viewpoints of white supremacy adherents as straightforwardly as possible, leaving it up to the reader to judge the credibility of these beliefs. One especially thought-provoking point made by the authors is that there are quite a few issues and concerns raised by the white supremacists which also resonate with more mainstream American citizens. I have met and chatted with Howard Bushart. He is a very thoughtful and articulate man, and I was impressed with his genuine desire to understand his subjects on their terms, to learn from his own research, which is the starting point all good scholarship. The book is very well written and includes exclusive photos taken in the course of the authors' research. I highly recommend it.

Published by Thriftbooks.com User , 24 years ago
The authors of this book need to be commended for their work. For the first time, the views of a wide array of white supremacists are presented without snide comments or constant attacks. Instead, the authors have presented the facts and let the reader conclude the validity of the arguments made by the KKK, WAR, etc. This is the only true way to combat such views is open, honest discussion and not screaming fits (a la "Geraldo", "Donahue").

A detailed book exposing answers to many of my questions.

Published by Thriftbooks.com User , 24 years ago
This book has answered many questions I have always had about white supremacists organizations and Identity Christianity. By using Bible quotes and personal interviews "Soldiers of God" makes it clear as to what, why and how these people derive their conclusions from the Bible. I recommend that everyone pick up a copy and read about these interesting people and their complicated beliefs.
Trustpilot
Copyright © 2022 Thriftbooks.com Terms of Use | Privacy Policy | Do Not Sell or Share My Personal Information | Accessibility Statement
ThriftBooks® and the ThriftBooks® logo are registered trademarks of Thrift Books Global, LLC