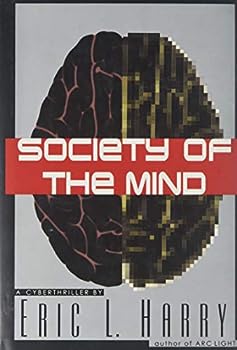 Society of the Mind: A Cyberthriller

Filled with virtual reality, artificial intelligence and robotics, this is the story of Laura Aldrich, a young Harvard psychology professor who is offered $1 million for a week of unspecified work at the island compound of genius/madman Joseph Gray. Overwhelmed with the offer, Aldrich meets Gray and discovers that her job entails psychoanalyzing Gray's most prized invention--an all-powerful, humanlike computer.

One of my favorite books!

Published by Thriftbooks.com User , 16 years ago
What a great book. Being a psychologist, I loved the question of whether or not "artificial intelligence" can develop mental illness. The story is fast-paced, exciting. Somewhat similar to Jurassic Park. This was the first Eric L. Harry book I read; it sent me in search of his others. Highly recommended!

Published by Thriftbooks.com User , 20 years ago
Eric L. Harry is an engaging author who captured my imagination and attention with this book! He has written a real page-turner with this one. He showed a lot of good imagination by writing a lot about new inventions that are within our grasp, and the only thing that I thought was a little unrealistic was the VR room with walls that moved in to conform to your body.The plot was excellent, but the main focus of the book tended to be on the inventions and how they would affect the human race. His camaraderie between characters was excellent and very believable. I would tell anyone that's looking for a good cyberthriller to go pick this one up!!!

Published by Thriftbooks.com User , 22 years ago
I was awed by Harry's brilliant Arc Light, especially parts about the fusing of a nuclear weapon, as well as the prosecution and aftermath of a nuclear strike. When I saw he had written a cyberthriller, I knew I had to give it a try. I like to read fiction slowly and absorb the nuances of the plot and descriptive writing. So to say I was pleased with Society of the Mind would be a gross understatement. It was superb in every way I can write. Immediately after finishing this book, I sought and found Harry's latest offering -- Protect and Defend. In the early goings it has also grabbed my rapt attention. Again, Society of the Mind won't disappoint you and ably fills the void between Tom Clancy's fiction novels. I suggest reading all three of Harry's novels. I am also hoping for a sequel to Society since there is so much more that can be told about the Model Eight robots, the projected Nines, the mysterious late launch of three rockets, the future of HD-TV, and many more not-so-futuristic subplots. And if you're into "casting" books as you read them, Harry had to have had Jody Foster (Contact) and Alec Baldwin (Hunt for Red October) in mind.

Published by Thriftbooks.com User , 23 years ago
In Ayn Rand's Atlas Shrugged, a brilliant engineer named John Galt rebels against the philosophical cancers of the times and proceeds to bring the engines of the Industrial age (1950's) to a halt. Before most of the world even know who John Galt is, the phrase "Who is John Galt?" has come to be the universal world-weary response to the moral contradictions of a mindless, altruistic culture. John Galt is Ayn Rand's romanticized symbol of the future she hoped to see.The world has changed much since the book was written. The Industrial Age has yielded to the Information Age. The notion of altruism as a dominant philosophical force seems quaint. One wonders what John Galt would be like in today's age of computers, cyberspace and artificial intelligence.We find the answer in the character of Joseph Gray in Society of the Mind. Like Ayn Rand's fiction, Society of the Mind brings to life a swashbuckling blend of plot, characters and ideas. Like Rand's novels, Society of the Mind is likely to evoke disparate responses from readers. While the book is unequivocally a cyberthriller (whereas Atlas Shrugged was a philosophical treatise wrapped in a fine fictional plot), Society of the Mind is alive with philosophical and technological intelligence which may be wasted on some readers.There are differences between John Galt and Joseph Gray. For one, Galt is an atheist; Gray believes in God, but views him as an equal. Galt gives long and profound philosophical lectures. Gray's observations are kept short so as not to disrupt the pace of the plot. He is no philosopher, but he is a thinker and man of action.Author Eric L. Harry has done his homework on artificial intelligence and has a fine grasp of the world of open systems and the thorny philosophical issues raised by what constitutes a mind. I enjoyed this book more than anything I have read this decade. It was a delight to experience a page-turning thriller imbued with provocative, iconoclastic intelligence.

Published by Thriftbooks.com User , 23 years ago
Believe it or not, I picked up this book in a "Buck-A-Book," finding it in a pile among piles of random books. The cover intrigued me at first, but the text is what really hooks you. I am a writer and a reader AND a computer scientist, and I can tell you that the Truth behind the story is hauntingly prophetic. Harry does well with not only the plot, but for once in a LONG time, I read a book with REAL characters with REAL emotions that I could believe and let myself be engrossed within. Kudos to Eric L. Harry, and here's to more yet to come!
Trustpilot
Copyright © 2022 Thriftbooks.com Terms of Use | Privacy Policy | Do Not Sell or Share My Personal Information | Accessibility Statement
ThriftBooks® and the ThriftBooks® logo are registered trademarks of Thrift Books Global, LLC