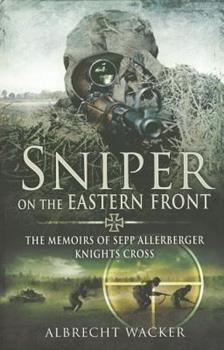 Sniper on the Eastern Front: The Memoirs of Sepp Allerberger, Knights Cross

Josef "Sepp" Allerberger was the second most successful sniper of the German Wehrmacht and one of the few private soldiers to be honored with the award of the Knight's Cross. An Austrian conscript, after qualifying as a machine gunner he was drafted to the southern sector of the Russian Front in July 1942. Wounded at Voroshilovsk, he experimented with a Russian sniper-rifle while convalescing and so impressed his superiors with his proficiency that...

Published by Thriftbooks.com User , 15 years ago
Americans in general know shockingly little about the kind of fighting that took place on fronts other than their own in World War II (or other wars for that matter). It is therefore extremely important to have the opportunity to read first person accounts of the experiences of soldiers on those other fronts, especially when as in this case it is the Russian front where Germany was essentially defeated, and the memoir is written by a soldier who fought with the competition as it were. This book, essentially a series of interviews of an aging veteran of the 3rd Mountain (Gebirgsjager) Division, woven together to give us a more or less continuous narrative of two years experience on the Russian front, is outstanding in every important way. The author gives one a view of life in the trenches not often discussed in books on a 'higher' level, i.e. the experience of combat, fear, panic, rage, comfidence, loyalty, cynicism and resignation. The discomfort of waiting immobile under a tank for hours; the horror of having to watch comrades in arms be tortured mercilessly by the enemy; the helplessness of witnessing rapes and civilian murders; and the foreboding of disaster. It is utterly human, and utterly inhuman at the same time. Besides the front-line duty which takes up much of the book, there is some good material on the technical aspects of marksmanship, of the Russian and German equipment utilized, and of the training a sniper would go through. It is also quite a valuable record, if an anecdotal one, of the kind of men the Soviet enemy fielded. Germans and Nazis committed plenty of crimes in the east against civilians and soldiers alike, but they were by no means the only perpetrators, and held no monopoly on evil. It is useful to be reminded, and reminded forcefully, of this fact by eyewitnesses. War was fought at its most vicious on the eastern front, in a way present day soldiers, especially those of western armies, cannot easily conceive. This book has it all. This is no glamorization of war or combat; very far from it. It is shocking and brutal and not fit for TV. One comes away from the experience moved, educated, saddened by the complete futility and destruction and pointlessness of this most grotesque of wars. There isn't very much uplifting in the book. It is an excellent first hand account of war at its worst.

Published by Thriftbooks.com User , 16 years ago
We here in the U.S. tend to be shamefully ignorant of episodes of either of the world wars that did not include American soldiers. SNIPER ON THE EASTERN FRONT: THE MEMOIRS OF SEPP ALLERBERGER, KNIGHT'S CROSS, lends critical insight to the barbarism and intensity that was the German and Russian campaign of the Eastern Front in WWII. Among certain circles, this book has already raised debate as to the true identity of just whose memoirs these truly are, as Sepp Allerberger seems to be a pseudonym. Nevertheless, this is a fast paced and riveting account that is obviously accurate and worthy of the person who lived it. The story unfolds as Allerberger, an Austrian born soldier, is drafted into the German Mountain Division. He qualifies as a machine gunner and is sent to the Ukraine, where fate soon intervenes. Allerberger is wounded by a Russian sniper, but finds a Moisin Nagant model 91/30, the famed Russian sniper rifle. While recuperating from his wound, Allerberger tirelessly practices his marksmanship with his newly liberated weapon and soon becomes exceedingly proficient. He is placed back into service as a German sniper where he develops his true legacy. He records 257 confirmed kills and in doing so, is awarded the famed Knight's Cross of the Iron Cross. Memoirs don't always read well, but this volume is exceptional. The tactics used are quite descriptive and the action is non-stop throughout the short 146 page book. This book brings to life, the savagery and butchery that was the Eastern Front and has a well deserved place on the bookshelf of any WWII enthusiast. Regardless of Allerberger's true identity, this story is one that deserves the short time it will take to read. Monty Rainey www.juntosociety.com

Published by Thriftbooks.com User , 16 years ago
SNIPER ON THE EASTERN FRONT - THE MEMOIRS OF SEPP ALLEREBERG was written by Albrecht Wacker, who had interviewed the sniper and translated the original story into English. When I began reading the book, I was apprehensive that the story was all made up because the sniper wrote his story using the psuedonym Josef Sepp Allerberger. The story is shocking, sad, brutal, and historically accurate. The young sniper lived a charm life and lived to tell of his experiences on the Eastern Front. I believe that Sepp Allerberg was actually the top German sniper Obergefreiter MATHIAS HETZENAUER. Is it a coincidence that both Hetzenauer were born in 1924 (Hetzenauer in December, "Allerberger" in September)? Both were Austrian and both served in the same unit, 3.G.D./Gebirgsjager-Regiment 144. "Allerberger" writes that he received his Knights Cross on 20 April 1945, but according to DIE RITTERKREUZTRAGER 1939-1945 by Gerhard von Seemen, which lists ALL Knights Cross recipients, no one from the unit received a Knights Cross on this date. However, there was a SEPP DRAXENBERBER who received it on 17 April 1945, the same day as Hetzenauer. Draxenberger was SS - Hptscharfhr. zugf im SS Pz. Rgt. 5 "Wiking." Just substitute "Aller" for "Draxen." Interesting, isn't it? And there is more. Hetzenauer was wounded in the head by an artillery blast on 6 November 1944; "Allerberger" in late September or early October. Towards the end of the story, "Allerberger" makes it back to his hometown. Hetzenauer is captured by the Soviets and spent 5 years in a POW camp. It is rather unfortunate that this book was written under a pseudonym, but I can understand why. Since Hetzenauer died a few years ago, I hope that writer Albrecht Wacker follows up with more photos, and a revised title: SNIPER ON THE EASTERN FRONT - THE MEMOIRS OF MATHIAS HETZENAUER.

Published by Thriftbooks.com User , 16 years ago
A GREAT small book of only 143 pages that is an absolute treasure. Very human. No false moralisms. TERRIBLE images of war and barbarism that would make a few people think twice before acting and talking stupidly. Good work, Mr. Wacker.

A gripping account of the horror of the Eastern Front

Published by Thriftbooks.com User , 16 years ago
I started reading this book one morning and devoured it by the time I went to bed - I could not put it down. I found the book to be well written, fast paced, and gruesome. The author uses an easy writing style that draws you into Sepp's (the German sniper the book is about) horrible world of high intensity warfare in the meatgrinder of the Eastern Front. The accounts in this book are neither glamorous nor heroic...simply brutal. I read closely Sepp's description of snipercraft techniques - such as using a collapsible umbrella to mount camouflage - that allowed him to survive in the Russian whirlwind and that are applicable even today. Sepp was officially recognized for 257 kills, but due to the Germans' strict accountability system he probably killed over 400. Readers will feast on the gory details of his many sniping battles...specifically the night he won the Knights Cross for gunning down an entire Russian infantry company single handedly. I recommend this book to ANYONE who is interested about the Eastern Front in WW II or for learning about superior snipercraft in a high intensity warfare environment. Some of his accounts simply made me cringe (like graphic accounts of Russian soldiers torturing and mutilating captured German snipers). This book will remain in my collection. You can judge for yourself, but I don't think you will regret it.
Trustpilot
Copyright © 2022 Thriftbooks.com Terms of Use | Privacy Policy | Do Not Sell or Share My Personal Information | Accessibility Statement
ThriftBooks® and the ThriftBooks® logo are registered trademarks of Thrift Books Global, LLC