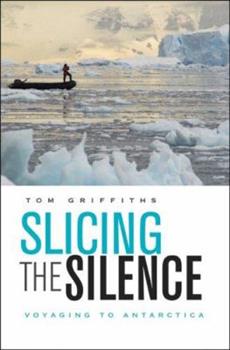 Slicing the Silence: Voyaging to Antarctica

In 2002, environmental historian Tom Griffiths set sail with the Australian Antartic Division to deliver a new team of winterers. In this book, Griffiths reflects on the history of human experiences in Antartica, taking the reader on a journey of exploration, discovery and adventure in an unforgettable land.

Published by Thriftbooks.com User , 12 years ago
Since The Son and The Daughter came I have become an armchair adventurer rather than an outdoor adventurer. The tale of Shackleton's adventure to Antarctica has always fascinated me; Trapped in ice for months and sailing to rescue in a small boat to an island hundreds of miles of away. I am always stunned that his entire crew survived in a situation where none should have. I came across a blurb about Tom Griffiths' Slicing the Silence: Voyaging to Antarctica in National Geographic's Adventure magazine. The author traveled to Antarctica and kept a diary. This book mixes entries from his diary with the history exploration of Antarctica and settlement on the icy continent. The book is about the enduring power of the "heroic era" stories of exploring Antarctica, as Edwardian figures sledged across the inhabited expanse of snow and ice. [Antarctica] is a place where nature is lethal, humans are always just visitors and the land is covered by ice kilometers deep. This is a landscape in which the laws of chemistry and physics - and indeed the power of metaphysics - predominate, and terrestrial biology looks very marginal indeed. The ocean is where life is: the largest land animal is a mite. The ice is massive, deadly and - in spite of its own variety - reductionist. It simplifies and universalises Griffiths does a great job of summarizing the history of exploration, living on Antarctica and the implication of Antarctic research on human behavior. He puts in contrast the easy death of humans on the continent with the abundant life in the ocean just offshore. He moves onto the current technology and climate research at the Antarctic bases. In this place where humans can barely exist, we are learning more about our world. In the end, people go South to Antarctica "for purity, solitude, otherworldliness; they go there for the silence."

Published by Thriftbooks.com User , 13 years ago
Griffiths opens his book: "To voyage towards Antarctica is to go beyond the boundary of one's biology towards a frightening and simplifying purity. [You need warmth and food, and stories.] Stories are privileged carriers of truth. Truth ... cannot easily be stated explicitly. It is not to be found in a chronicle of facts ... Story creates an atmosphere in which truth becomes discernible as a pattern." Griffiths includes extracts from other authors, for example quoting Ursula le Guin, who argues that Scott's "real heroism" lay in "what he made of his failure", his rendering of a needless sacrifice in virtuoso prose. Scott knew the power of story-telling, as he lay dying in his tent, writing copious letters and notes. "In the elemental purity of the ice, in the white noise of the enshrouding blizzard, the written word assumed extraordinary power." The book's structure is based on pages in Griffiths' Antarctic diary when he sailed to Antarctica as a guest of the Australian Antarctic Division. Each chapter can be read as a stand alone essay, and each essay is an excellent summary of its topic. These are adventure stories, but contain a great deal of analysis as well. The first six chapters review the history of the Antarctic up to the International Geophysical Year of 1957/58. It is concise but comprehensive. There are chapters on living in the Antarctic, comparing the heroic era and with the modern. There is an excellent exploration of the issue of food and entertainment and the closing chapter discusses the role of tourists. [I was one of about 30,000 tourists who visited in 2004.] The background literature is outstanding and extensive and explores literature not usually found in debates on Antarctic. There's an Australian bias to the book, of course, but that adds an interesting point of view. Australia claims 40% of the continent and has taken steps to make that portion "Australian" to reinforce its legal claims. The book is compelling reading, and very well-produced. Robert C. Ross 2008
Copyright © 2020 Thriftbooks.com Terms of Use | Privacy Policy | Do Not Sell My Personal Information | Accessibility Statement
ThriftBooks® and the ThriftBooks® logo are registered trademarks of Thrift Books Global, LLC