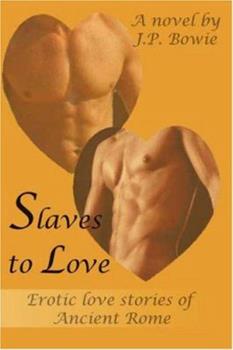 (Part of the Slaves to Love Series)

This description may be from another edition of this product. Raised in the city of Capua, renowned for its gladiator training grounds—Lucius, a young patrician, is unprepared for the obsessive desire that almost overwhelms him when he first sees Callistus, a...

Nice Appetizer, Starving for the Meal

Published by Thriftbooks.com User , 11 years ago
First things first -because I had NO IDEA when I purchased this book- This book is not One Complete Story, but two short stories. Good stories, but short appetizers. Honestly I really hate this trend of writers coming together to write tidbit books. Give me the goods, give me 190, 255, 386 pages of beautiful men, loving eachother, fighting eachother. A world of gay vampires, werewolves, Roman Gladiators, Emperors and privlaged young men in one long novel. I need to escape this crappy reality. WHEW!!! I had to vent. Ok, ON WITH THE REVIEW. I liked these stories alot, I would have loved them if they were two full length novels, but no point in complaining about what DIDNT happen. The first story: "Lucius & Callistus" is about Lucius -a young man who hates his dying father and is struggling with the fact that he is a homosexual in a time when having sex with men is cool, but not something that you make a permenant living situation. He falls in love with Callistus -a captured soldier, turned slave who is made to fight in the Gladiator Games. I imagine Lucius looks like Ian Somerhalder (GOOGLE him) and Callistus looks like Andy Whitfield from the show "Spartacus: Blood and Sand. I do that to make my reading experience much more effective. N-E Way, coincidentally, Callistus meets the real Spartacus who leads a rebellion of the slaves against Rome. It is discovered that Callistus loves Lucius, but has to fight along side Spartacus for the noble cause. This story really does get exciting and moving and I wish it was longer. The ending was sad and I admit, ALMOST made me tear up. The second story: "Damian & Demetrios" is about Damian -a young talented artist of means, and the son of a Senator who is totally in love with a Gladiator named Demetrios. This story takes place during the reign of Emperor Nero -and everyone should know how that turns out- this story had the best ending and it really made up for heartbreak and pain left over from the aforementioned story.

Published by Thriftbooks.com User , 12 years ago
The book contains 2 unrelated novellas, which center on 2 love stories, both are between a Roman / Latin and a gladiator. It's really well-written and edited, no obvious typos, and quite realistic historic settings and character interactions. The book reads as any well-written and well-researched historical fiction set in Ancient Rome, not just a typical m/m romance. The plots are captivating, containing numerous adventures and dangerous situations. Sex scenes are explicit, passionate, well-described and relatively numerous (yet do not distract from the plot - I think the author found quite the right balance there). What I particularly liked about this book is its light, optimistic tone, not overly sweet, with a healthy dose of realism. Most stories set in the same Ancient Rome era tend to be very dark, depressive, often with grotesque scenes of violence and/or hardcore rape-sex. Nonetheless, the stories here are still realistic enough, with strong, passionate and interesting protagonists. It reads as if the protagonists just chose to view their lives with hope and optimism, despite sometimes quite threatening circumstances. Thus, the book put me in a good mood. The first story is about a young Latin teacher / son of a well-established family falling for a gladiator. The said gladiator turns out to be Spartacus's friend, and participates in the famous slave rebellion. Their relationship is sweet and tender, yet a good example of realism in this book are the scenes when the main character, a fairly well-positioned Latin, has to whore himself in order to pay out his late father's debt. After all this, however, he doesn't indulge in melodramatic self-pity, and gets the best out of the situation. Some reviews here complained that the story is too open-ended, not particularly "happily-ever-after" (though not really tragic). I think they just didn't have a chance to read the second volume, Warrior Prince, which is the direct continuation of the first story. The second volume is also fairly well-written, though more romantic (and correspondingly more unrealistic), with the expected happy-ending. The second story is about a love between a son of a wealthy Roman patrician and a gladiator, a Greek, whose cruel father sold him into slavery. The setting is during the famous fire in Rome, set by the crazy emperor Nero. The tragic scene of Christians accused of that fire and their murder in the arena is also enacted. The center of the story, however, is a tender love story between the patrician and the gladiator. However, what saves the book from being sickenly sweet are the realistic characters, their so human and flawed reactions, emotions, thoughts. Even side characters are given a lot of care and detail, and are very engaging. All in all, I recommend this book to all who like well-written m/m historical novels (or novels with gay protagonists), or just anyone interested in Ancient Rome history and settings. (Anyone who enjoyed The Persian Boy by Mary

I'D BUY THIS ... BUT NOT BECAUSE OF ITS COVER

Published by Thriftbooks.com User , 13 years ago
I've long been a die-hard fan of any piece of "Imperial Rome" literature. I was reading QUO VADIS, BEN HUR, THE UNWILLING VESTAL, while many of my classmates were still wrestling with the intricacies of "See Spot!" "See Spot run!" W.G. Hardy's THE CITY OF LIBERTINES, is one of the few books I've actually read again and again. That reason alone would have seen me turn to J.P. Bowie's SLAVES TO LOVE: EROTIC LOVE STORIES OF ANCIENT ROME, in my pile of to-read books, when over the last few days, a nasty bit of the flu put me flat on my back, and I found myself bored silly with proofing and writing my own stuff. Another reason for my selection, of course, is that J.P., I had been informed, was one of three other authors who would be joining me in the to-be-released-this-month short-story anthology HARD WORKING MEN from MLR Press; while J.P.'s works have been recommended to me, on more than one occasion, I'd found little time to make my acquaintance with it. While I'm reluctant to be the forever-optimist who can see the good thing even in a horrendous bout of the flu, it having allowed me the opportunity to read SLAVES OF LOVE before I would likely, otherwise, have gotten to it, I will admit to having enjoyed the read, even if -- this book no exception -- I find that I'm more drawn to "novel" format than "short-story". At least, here, there are only two short-stories (novellas?), so they each have enough wordage to provide adequate plot and character development. Both stories are based upon the premise of love at first sight (not my favorite premise), and rely upon that love being between patrician and gladiator and vice-versa (I've known enough attraction across class lines to know that this sort of thing happens everyday). "Lucius and Callistus" explores forbidden love amidst the background of the slave rebellion led by Spartucus; "Damian and Demetrios" sees romantic fiddling being done while the mad-emperor Nero is doing some fiddling of his own while Rome burns. While the former's ending left me wanting just as bit more, by way of resolution, despite the more probable reality of the story-line conclusion than my hoped-for expectations, the latter sufficiently ties up all of the loose ends into a genuinely enjoyable read. If I preferred the "two D's" over "L and C", it's probably only because I've always been fascinated by obscene madness and dissolution; even if if Nero's part is actually minor. There is a lot of historical fun and games here, a lot of conflict and class struggle, a lot of passion (a book without sex, based within this time frame, would be a book entirely out of sync with the reality!). There are realistic people here, doing realistic things (once one accepts there is such a thing as love at first sight), experiencing the kind of hubris to which we can all relate, in this day and age, when all sorts of comparisons are being made between the here and now and the declining days of the Roman Empire. If you've a fondness for thing
Copyright © 2020 Thriftbooks.com Terms of Use | Privacy Policy | Do Not Sell My Personal Information | Accessibility Statement
ThriftBooks® and the ThriftBooks® logo are registered trademarks of Thrift Books Global, LLC