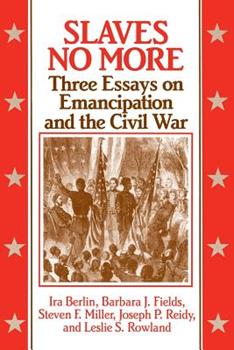 Slaves No More: Three Essays on Emancipation and the Civil War

The three essays in this volume present an introduction and history of the emancipation of the slaves during the Civil War. The first essay traces the destruction of slavery by discussing the shift from a war for the Union to a war against slavery. The slaves are shown to have shaped the destiny of the nation through their determination to place their liberty on the wartime agenda. The second essay examines the evolution of freedom in occupied areas...

Published by Thriftbooks.com User , 13 years ago
This book, consisting of three robust essays written by a stellar team of British historians, is an exceedingly important book because it uses historical facts and the logic and structure of the social and military situations of the Civil War, to correct a very much distorted record of how, in the aftermath of the Civil War, the slaves were actually freed. And in the process it shines fresh light on American myths, legends and long held propaganda about the role whites, whether North or South, and including President Lincoln, played in freeing the slaves. The upshot of the book is that it not only demystifies Emancipation, which in any case, was an "evolutionary process" rather than a single "discrete act," it also puts a lie to the accepted legend that American whites were so "freedom-loving" that they fought a war entirely to ensure the freedom of the slave. Despite the well-worn and accepted legend that it was "Lincoln who freed the slaves," the facts revealed in the first essay (as well as in the logic and reality of the social conditions surrounding the war revealed there) -- tell quite a different story. Together they strongly reinforce the idea that until the Thirteenth Amendment, the slaves were never actually "freed" at all but that they simply walked to freedom themselves as the institution of slavery simply crumbled all about them, and did so under the weight of the "fog" and "chaos" of the Civil War. The gates of freedom were simply blown off their hinges and sprung open because no one was available to close them. That is, no on was available to "mind the store," and as a result, the slaves, who did not hesitate to take advantage of this situation, simply scampered out into the fresh air called freedom. Thus they were not so much "granted" their freedom, as they were simply "released into the air where they could simply inhaled it." They were simply left to inhale it on their own accord entirely as an exigent byproduct of the "fog" of the Civil war. And importantly, the fact that whites on neither side of the war could do much about it, does not in and of itself make them, de facto, champions of black freedom. Had they been able to do so, the gates of freedom would have surely been securely slammed shut again. Even the Thirteenth Amendment, which was to follow in the wake of the war, was little more than an after-the-fact ratification of an existing condition: in effect a fait accompli resulting too from the lingering chaos of the war. Put simply, the barn gate of slavery had been blown open as a result of the chaos of the war, and the slaves had simply walked out and into the breeze of freedom -- such as it was at the time. After the fact, they could not very easily be corralled back into the pen. At least, that is, not until the "Redemption;" that followed "Reconstruction" and the 1876 election of Rutherford B. Hayes; which was itself followed by the Dred Scott Decision, which together as a package, effectively rendered the Thirt
Trustpilot
Copyright © 2022 Thriftbooks.com Terms of Use | Privacy Policy | Do Not Sell My Personal Information | Accessibility Statement
ThriftBooks® and the ThriftBooks® logo are registered trademarks of Thrift Books Global, LLC