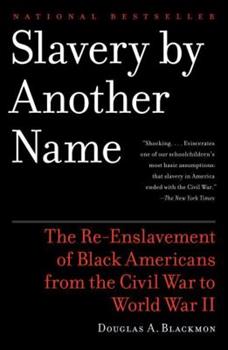 Slavery by Another Name: The Re-Enslavement of Black Americans from the Civil War to World War II

by Douglas A. Blackmon

A Pulitzer Prize-winning account of the "Age of Neoslavery," the American period following the Emancipation Proclamation in which convicts, mostly black men, were "leased" through forced labor camps operated by state and federal governments. In this groundbreaking historical expose, Douglas A. Blackmon brings to light one of the most shameful chapters in American history--an "Age of Neoslavery" that thrived from the aftermath of the Civil War through...

Another Missing Chapter in American History

Published by Thriftbooks.com User , 14 years ago
Who won the Civil War? Introduction According to the subtext of this book, the answer depends on what is meant by the question. If you mean militarily, then of course there is no question but that the North won the war. However, if you mean who won the hearts, minds and souls of white America, then it is equally clear from the evidence that unfolded over the next one hundred years, that the winner was the South. It matters little that each side had different goals and more importantly different pretexts to disguise its goals. In retrospect, and from any angle, this book's focus on "forced labor" proves that the result are all the same: For the North, "ending slavery" was just a pretext to gain control over the lucrative cotton markets and gain hegemony over the South, and do so at the time cotton drove the international economy in the same way that oil drives it today. However, it was the South that kept its eye on the ball. Unlike the North, the South was un-conflicted about the full meaning and importance of slavery: Southerners knew at a deep level that slavery was not only the lynch pen of the Southern way of life, it was the existential process that defined what it meant to be a white man in America, period. Thus, if the war was about the existential existence of white maleness, then clearly this book, and the unfolding of the next 100 years of American history that it describes, proves that the South won the Civil War. Because this author makes it as clear as the sun is in the sky, that since the South's victory, wherever the South goes, the North is sure and soon to follow. It is this story, so skillfully buried within the subtext of this book that makes it such an important contribution to American history. The Book This is a masterful and scholarly story about the re-enslavement of blacks, as that process began in the aftermath of the Civil War. It took place when "Reconstruction" was willingly dismantled by the ruling North-South coalition of the day, codified in the compromise of 1876, which ended in the election of Rutherford B. Hayes. As blacks (and any real chance for a true democratic America) were thrown under the bus, "Reconstruction" ended. Northern soldiers left blacks to their own devices, and a conscious period of southern lawlessness and violence ensued. Southern Rebels renamed this period of violence and lawlessness "the Redemption." This very thoughtful and carefully written manuscript is told through the rigors of the author's own prodigious research, which includes many private and previously undisturbed records, research that is seen through the life and lineage of one black man, named Green Cottingham. Green serves as the historical prototype and "stand-in" for tens of thousands of anonymous Blacks who did not manage to survive the forced labor camps. Like many of them, Green too was arrested on "trumped up" charges of vagrancy at the tender age of 14 and spent the rest of his youth and a great deal of his ad

Published by Thriftbooks.com User , 14 years ago
In what may well be one of the most important works in non-fiction to emerge in the 21st Century, investigative journalist, Douglas Blackmon, has authored a compelling and compassionate examination of slavery's evolution, practice and influence reaching far into the 20th Century. Blackmon's, Slavery by Another Name, is certainly a prizeworthy study by a writer whose acumen for the highest in journalistic standards combined with an unusual gift for storytelling makes this historic work both enlightening and inspiring. As an African American (bi-racial Black/White) I can attest to the facts and stories Mr. Blackmon presents, as told to me by my father who only upon his deathbed, felt safe enough to reveal. Growing up in Jasper Texas in the 1920's, he was picking cotton at age 7 and driving tractors at age 9. The atmosphere for Blacks was a living holocaust, where my father witnessed the lynching of his boyhood friend at age 13, where oppression was a daily experience for Blacks; even in the most simple terms of human interaction, where making eye-contact when addressing Whites was considered untenable and subject to harsh retribution. Indeed, Mr. Blackmon goes far beyond these traditional understandings of racial practices, and brings new, deeper knowledge of how slavery had merely been retooled to accommodate the unforeseen realities of emancipation, allowing it to flourish for many more decades in what Blackmon calls the "Age of Neoslavery". Resulting from the recent history-making speech on race by Presidential hopeful, Illinois Senator Barack Obama, there is huge public interest in reaching a more comprehensive understanding of race relations in our nation. The fact is, public response to Sen. Obama's speech has uncapped an overwhelming outpouring of public interest, writings, and dialogue. Mr. Blackmon had a similar experience back in 2001, when his article appeared in the Wall Street Journal on how U.S. Steel Corp. relied on the forced labor of Blacks. This too received massive public response expressing appreciation and sincere interest to learn more. Hence, after 7 years of exhaustive research and interviews, Slavery by Another Name arrives at a time our nation, facing a historic general election, is contemplating race as never before. And Mr. Blackmon's pioneering work is helping us to break new ground toward a path of greater insight and reconciliation. - Ellison Horne
Trustpilot
Copyright © 2022 Thriftbooks.com Terms of Use | Privacy Policy | Do Not Sell My Personal Information | Cookie Preferences | Accessibility Statement
ThriftBooks® and the ThriftBooks® logo are registered trademarks of Thrift Books Global, LLC