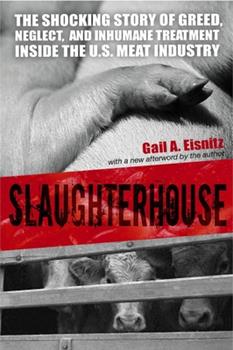 Slaughterhouse: The Shocking Story of Greed, Neglect, And Inhumane Treatment Inside the U.S. Meat Industry

by Gail A. Eisnitz

Slaughterhouse is the first book of its kind to explore the impact that unprecedented changes in the meatpacking industry over the last twenty-five years - particularly industry consolidation, increased line speeds, and deregulation - have had on workers, animals, and consumers. It is also the first time ever that workers have spoken publicly about what's really taking place behind the closed doors of America's slaughterhouses. In this new paperback...

Published by Thriftbooks.com User , 16 years ago
Do yourself a favor, read this book. I just finished Slaughterhouse...all I can say is wow. I feel like I've been living under a rock not to have known this stuff, but then how could I, the average consumer, know? To tell you the truth, I'm angry, outraged. The things I learned about the USDA are more than shocking. Nightmarishly shocking doesn't even begin to cover it. There are far too many things I could list in this book that shocked me to my foundation. And I considered myself informed. If I consider just the conditions in the slaughterhouses, I'm revolted, disgusted and my stomach is still churning. Animals aside, those poor people who are forced, because of circumstances, to work in those places...I'll say it again, I was shocked. I had no idea. Torturing those animals not by choice or indifference but because their only option is unemployment is, well, shocking. As Ms. Eisnitz pointed out through example, as have many behavior studies, cruelty to animals, despite the reason, effects people, changes them, into something less than human. I truly believe that future generations will look back at this time, right now, of great leaps in technology and vast increases in understanding of animals, and yet complete and unmitigated disregard of animal, and human, rights and safety, and in most cases increased safety risk and cruelty due to 'demand' and 'modernization', with revulsion, shame and contempt.

Published by Thriftbooks.com User , 17 years ago
The format was easy to read, short concise stories, but the material was hard to stomach. Gail is a wonderful author and has brought to light all sides of the meat industry. Including the impact to the animals, children, workers, inspectors and vets. It shows that there is no one guilty party, there is a guilty industry in need of radical change, and an uninformed public - (one that in my limited experience would rather stay blind to these issues). On a personal note, I never understood what my decision to eat meat meant for the meat I was eating. I could never have comprehended how horrible their deaths are, I was already aware their lives were not pleasant, but I was not prepared for the suffering that awaits them after a life of strife. Cows, pigs and chickens are taken through the slaughter house alive. Cow's are often alive all the way through the line, this includes while they are getting their legs chopped off with cutters - imagine that... They do not stop the line for these inconveniences. The workers shove electric prods in their rectums and eyes - deep into the sockets occasionally pulling out the eye to get them moving to the slaughter line. After reading this I will never eat another piece of meat again. It is not my decision to make any other living thing suffer. But I find it amazing that when you go to share this book, people don't want to know. They would rather stay ignorant and that in itself has shocked me tremendously.

One day you must open your eyes.

Published by Thriftbooks.com User , 17 years ago
This book questions the notions that the government ensures the wholesomeness of our food and insures that slaughter technique is free from any form of animal cruelty. It is a stinging indictment of the meat industry and the USDA and if true will make you stop eating meat and wonder where the government and industry in general, and humanity in particualr is heading. I read this book in one sitting two weeks ago and haven't eaten a single piece of meat since. I could not turn away. If you are quite content to eat the food that is placed in front of you, don't read this book. If you love animals and couldn't concieve of hurting one of them, don't read this book. If you wonder why restaurants refuse to serve rare meat read this book. If you want to follow the path path of an animal from the farm to your table read this book. I walked away from its reading ashamed. This is a guided tour through hell.

Its not about cruelty or even safety, its about PROFIT

Published by Thriftbooks.com User , 18 years ago
This book is for everyone to read, not just animal activists or vegetarians. This is a book about corporate greed and government ineffectiveness, and how absolutely everyone in the room refuses to see the Pink Elephant at the table, stuffing itself at the expense of your health and hard earned money. Pay Attention! Virtually every piece of meat you purchase from your supermarket with the "USDA Inspected" safety stamp on it HAS NEVER BEEN INSPECTED AT ALL. USDA inspectors are no longer responsible for "Contamination Control", which amounts to debris coating the carcass such as feces, urine, mucus, pus, hair, dirt, grease, rat droppings, blood clots, etc. Their only responsibility is to examine the organs and head for gross malformations, and the inspectors are severely reprimanded or even fired for stopping the line, so virtually every filthy and disease ridden corpse makes its way to your table anyway. A) Taking the butchering of animals away from the smaller, pride-of-ownership slaughterhouses and moving virtually all of the animal product production to high-speed, high profit corporations was a deadly move, and it is up to the working-class people to stop it. B) The US is the only industrialized country that cools their chicken carcasses in water instead of air cooling, creating a virtual disease pool filthier than a public toilet next to a crack house. Why? Because water adds weight, so you get the privilege of actually paying increased poundage for the putrid and infected water your chicken soaked in. C) Going against the National Academy of Science recommendations, the USDA relaxed standards and cut back on inspections while allowing production to increase over 40%. The question is no longer "IF" there is fecal matter on your meat, but "HOW MUCH IS ACCEPTABLE". Feces has been reclassified from a "Dangerous Contaminant" to a "Cosmetic Blemish". So has hair, mucus, dirt, droppings, etc. D) With greed and profit being the only driving force behind the industry now, they have tried to pass the buck to you, the consumer, by telling you that the process of decontamination is up to YOU; i.e. cook your meat before you eat it. When did the decontamination issue switch from containment BEFORE occurring to recovery AFTER they allowed the feces to literally pass under their noses? E) Working conditions in these Flesh Factories are deplorable, with chances of injury or illness six times greater than working in a coalmine. Workers cannot leave the floor to take a bathroom break, and often urinate into the blood trench or on themselves. If a worker removes a carcass as "condemned", the Supervisors at the plant often put it back into production and reprimand the worker. F) Slaughterhouses take advantage of immigrant labor, knowing they are too poverty stricken or scared to protest their working conditions. The USDA Veterinarians who oversee the Plant's Inspection Line are mostly Foreigners, who fear for their jobs more than American wo

Published by Thriftbooks.com User , 22 years ago
Ms. Eisnitz is frank and candid in her exposure of the uglier side of factory farming. Slaughter of live animals is never pretty, but in many of the USDA supervised plants, the conditions are unbelievably cruel and digustingly filthy. The workers are exploited, placed in harm's way, and are treated little better than the animals they have to process. The animals themselves meet terribly slow deaths when stun bolts fail and stick pit knives don't cut deep enough to allow them to bleed to death before skinning and gutting. And if the cruelty isn't enough to grab you, wait until you read about the offal blocked drains that flood slaughterhouse floors with blood and fecal material. Wait until you read about manure being classified as a "cosmetic defect" that can simply be rinsed off and the meat passed off as USDA select to an unsuspecting public. This book will turn your stomach and make you angry. You have probably already read many of the reviews and a majority of them come from vegans and vegetarians. Well, I'm not one of them. I raise meat animals and I eat meat. This book is important to me because I believe that Americans have a right to eat meat and not worry about it killing them with E. coli or Clostridia infections. I believe Americans should be able to believe that the USDA seal means the meat is safe and was killed in a humane fashion. Right now the American meat eating public is being betrayed by the USDA and "Slaughterhouse" details this with painstaking research and first-hand accounts."Slaughterhouse" is graphic and readers should expect it to be disturbing. But it is also very, very accurate. I've toured several slaughterhouses myself and found conditions similar to what Ms. Eisnitz has described. The USDA needs to step up enforcement of the Humane Slaughter Act, they need to POLICE the industry they oversee, not just sit idly by. In short, this book might not make you a vegetarian, but it WILL make you an activist.
Trustpilot
Copyright © 2022 Thriftbooks.com Terms of Use | Privacy Policy | Do Not Sell or Share My Personal Information | Accessibility Statement
ThriftBooks® and the ThriftBooks® logo are registered trademarks of Thrift Books Global, LLC