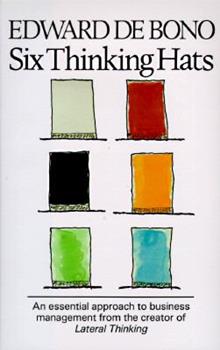 A leading authority on lateral thinking streamlines the decision-making process by identifying the central aspects of problem-solving and, by using real-life scenarios, describes how to focus thinking on each aspect individually, then link them into a productive progression.

This is an excellent method

Published by Thriftbooks.com User , 19 years ago
Good thinking is simple. The goal of effective thinking is to make complexity managable. The Six Thinking Hats Method is by design a KISS system that is not intended to emphasize how clever any individuals in a group are, but to make actionable decisions--in most cases to achieve business results (as de Bono wryly notes elsewhere, most academics aren't interested in effective thinking).The reason I'm writing this review is to correct an inaccuracy in the previous review. Having each person in a group adopt a different hat is exactly the OPPOSITE of what is intended with the Parallel Thinking method (a virtual synonym for the Six Hat method). The idea is that everyone in a group focusses on a specific element (Hat) at the same time, not individually. Doing it this way reduces argument and the role of ego in the conversation.As de Bono notes, an important element in his work is also to demystify creativity, and help people understand you don't need lava lamps and candles to "do" creativity effectively. You don't have to be goofy. Ordinary business people working on engines and vaccines--and, as far as that goes, Accounts Payable, Sales, and Project Management--need creativity to be effective and competitive in a 24 hour global marketplace.I teach this course. ....

Published by Thriftbooks.com User , 22 years ago
Seldom do I find a legitimate improvement on existing thinking processes, but there certainly is one in Six Thinking Hats. De Bono reports that this process reduces time spent in meetings by 20 to 90 percent, based on experiences reported to him since the book was first published. It also seems that many people feel that the evaluations that emerge are more useful ones, as well. De Bono himself makes this statement: "The Six Thinking Hats method may well be the most important change in human thinking for the past twenty-three hundred years." You'll have to decide for yourself, if the book lives up to that claim.De Bono diagnoses the fundamental problem of decision-making as being muddled thinking. Groups are simply not well equipped to deal with a wide range of data and perspectives simultaneously. The meeting often bogs down into conflicts of personalities and over focus on inimportant points. By creating a simpler way to think about issues, de Bono claims to eliminate many of these problems.The process is not one that I have used, but it makes sense to me as an improvement over less structured evaluation methods. It can be used by an individual or a group working together. The amount of structure you use can be high, or you can be more ad hoc. People learn best when they are playing, and the six hat approach clearly encourages a spirit of play. By giving each person a role (and each person eventually playing all of the roles), the method reduces the amount of personality-based conflict, encourages more participation, and gives validation to many different ways to present the question at hand. This should make each person feel more affirmed and invested in the process. Also, since the route is focused on getting lots out on the table, it also suspends judgment longer so that more ideas can emerge. As such, it is closer to the Japanese method of making evaluations than the American one (as de Bono points out). Here is the color scheme. Blue is the process coordinator (like the conductor of an orchestra) and starts and leads off the meeting (plus helps keep it on process) -- except sometimes it is better to have red finish just after blue summarizes at the end. Red goes second, and represents emotions and feelings to present both positive and negative emotional reactions, as well as more subtle things like intuition. It seems to be more free form from there. Let's go to yellow next, which is speculative and positive -- the optimistic side of the case. This view is to open up the possibilities.Naturally, that has to be balanced by looking at the downside, which is black (cautious and careful). This hat is normally worn the most in evaluations, and can easily be overdone. The idea is not to be negative, but to search out the risks.White plays an important, but neutral, role -- pointing out the facts that are known or are likely to be true. Care in characterizing what is known is important

Published by Thriftbooks.com User , 22 years ago
I presume to suggest that you read this book before you read de Bono's Six Action Shoes and strongly urge you to read both. As he explains in Chapter 6, "The first value of the six thinking hats is that of defined role-playing....[the second] is that of attention directing....[the third] is that of convenience....[and the fourth] is the possible basis in brain chemistry" which de Bono outlines in the previous chapter. What about the hats? The conceit is brilliant. Each hat is of a different color: white, red, black, yellow, green, and blue. De Bono assigns to each a quite specific combination of qualities and characteristics. Since childhood, my favorite color has always been green. Here is what de Bono says about it: "Green is grass, vegetation, and abundant., fertile growth. The green hat indicates creativity and new ideas." De Bono also briefly characterizes the other colors and then devotes an entire chapter to discussing each of them in depth.According to the subtitle, de Bono provides "an essential approach to business management." That is true. He helps his reader to increase various reasoning skills through carefully defined and structured role-playing, and, by directing and then focusing attention where it is needed most. How? By understanding and then developing entirely different perspectives which the various hats represent: White (neutral and objective), Red (powerful emotions), Black (gloomy and negative), Yellow (sunny and positive), Green (fertile and creative), and Blue (logical and in control). You get the idea. De Bono urges his reader to SEE all of the hats while associating with each its own defining qualities and characteristics. Here's an exercise (inspired by Bono ideas) which will work very well with those who have been required to read Six Thinking Hats prior to getting together to brainstorm. Buy several of those delightful Dr. Seuss hats (at least one of each of the six different colors, more if needed) and keep the hats out of sight until everyone is seated. Review the agenda. Review what de Bono says about what each color represents. Then distribute the Dr. Seuss hats, making certain that someone is wearing a hat of each color. Proceed with the discussion, chaired by a person wearing a Blue or White hat. It is imperative that whoever wears a Black hat, for example, be consistently negative and argumentative whereas whoever wears a Yellow must be consistently positive and supportive. After about 15-20 minutes, have each person change to a different colored hat. Resume discussion. Thanks to de Bono and (yes) to Dr. Seuss, you can expect to have an especially enjoyable as well as productive session. In addition to de Bono's Six Action Shoes, there are other excellent books also worthy of your consideration. They include those written by Guy Claxton, Michael Michalko, Joey Reiman, and Roger von Oech.

Published by Thriftbooks.com User , 22 years ago
I seem to find some of the most meaningful work by accident,and this one is a great find. Bono talks about the skills of thinking and how they can be taught an used in all areas of our decision making. He is a dry speaker but the content makes it worth while to concentrate and learn from his amazing insight within the mind. Bono simplifies the thinking exercise by using hats with different colors, making it easy to discipline your thinking in the way of steps. These thinking concepts enable one or teams to thinking together looking at different areas of a situation and brainstrom together to a end result that can be arrived at within harmony. Bono puts thinking into steps: 1. Information 2. Benefits 3.Critical thinking 4. Feelings 5. Creative thinking 6. Thinking about the thinking and creating and action plan for implementation. Very good book.

Published by Thriftbooks.com User , 23 years ago
Excellent, unique presentation of the thought process. If everyone in the organization adopts the visually stimulating idioms suggested for each category of thought presented-- colored thinking hats, the group creative thought process can be managed much better and individuals guided into thought playing roles, without risk to their egos!This book appears to be unfinished in the sense that the style is one of presenting a series of terse statement paragraphs with a liberal sprinkling of example paragraphs. A smooth transition between paragraphs is often missing--the book almost appears to be an organized presentation of the author's brainstorming sessions!I personally found the book refreshing, thought provoking and timeless ( in the sense that anyone interested in managing creative thought will always be able to use the techniques presented).
Trustpilot
Copyright © 2022 Thriftbooks.com Terms of Use | Privacy Policy | Do Not Sell My Personal Information | Cookie Preferences | Accessibility Statement
ThriftBooks® and the ThriftBooks® logo are registered trademarks of Thrift Books Global, LLC