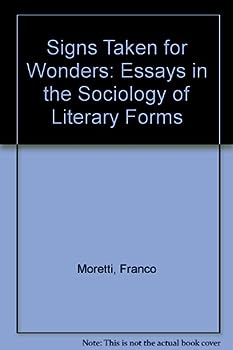 Signs taken for wonders: Essays in the sociology of literary forms

(Book #7 in the Radical Thinkers Series)

This description may be from another edition of this product. Shakespearean tragedy and Dracula , Sherlock Holmes and Ulysses , Frankenstei and The Waste Land --all are celebrated "wonders" of modern literature, whether in its mandarin or popular form. However,...

fantastic insight into the European novel

Published by Thriftbooks.com User , 22 years ago
All of Franco Moretti's in-class charm and wit is demonstrated in this series of essays on various forms of the European novel. He does a fantastic job of legitimizing not only popular texts, such as Dracula and the Sherlock Holmes series, but also the field of literary criticism itself. He makes a compelling argument for not only the profound effect that society has had in forming literary trends, but also literature's role in shaping society. His essay on Tragedy in Elizabethan and Jacobean drama contains some particularly fascinating insights into this phenomenon. While written in a colloquial tone, some essays can come across overly mandarin at times. Get through the first and most difficult essay, 'The Soul and the Harpy', and the rest will be smooth sailing. He makes his field seem almost, dare I say, 'cool'.
Copyright © 2020 Thriftbooks.com Terms of Use | Privacy Policy | Do Not Sell My Personal Information | Accessibility Statement
ThriftBooks® and the ThriftBooks® logo are registered trademarks of Thrift Books Global, LLC