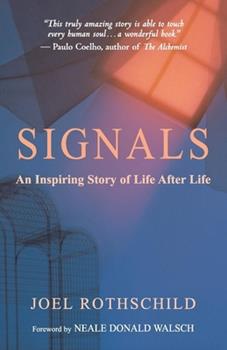 Signals: An Inspiring Story of Life After Life

Signals is an extraordinary true story of two friends, both living with AIDS, who make a simple but spiritually challenging pact: whoever dies first will try to contact, or "signal," the other from beyond. Joel Rothschild, the more skeptical of the two, is the one left behind. His book chronicles a series of miraculous experiences and encounters that tell an amazing story and offer proof of an afterlife. One man's journey from skeptic to believer,...

Signals: An Inspiring Story of Life After Life

Published by Thriftbooks.com User , 21 years ago
In July of 1999 while I was working as Neale Donald Walsch's Personal/Executive Assistant, a letter came across my desk from Joel Rothschild, author of SIGNALS and one of the longest living AIDS survivors on the planet. It was a very humble letter, asking for nothing, other than for Neale to view his manuscript and possibly give Joel an endorsement for the book, which was already scheduled for publication by New World Library. As it is with authors, such as Neale, whose every waking day is filled with requests for everything imaginable from people all over the world, there is a warm place in their hearts for fellow writers, knowing the courage it takes to write the things dearest to their souls. After having read Joel's letter, Neale handed me Joel's letter and said, "Contact this man and ask him to please send me his manuscript." I e-mailed Joel that very day, and received a nearly instant reply, telling me what a difference it made in his day to hear from me. He was having a difficult day, battling an AIDS related virus. My seemingly small e-mail made a HUGE impact on his day, soon to be life. He did send the manuscript, however, I was not able to review it for several weeks. I kept telling myself that I was going to set aside all of the other 100 plus tasks that were waiting for and receiving my attention and just read his manuscript. Neale and Nancy were on a tour of lectures and it was part of my job to read the manuscripts, give Neale my review and then allow him to look at them when time permitted him to do so. One afternoon in late August, I set all other tasks aside, took the book outside along with the cordless phone and started to read. Almost instantly I was in tears and had chills at various times throughout reading. I couldn't believe it when a few hours had passed and I realized the sun was setting. Feeling a bit hungry and ready for dinner, I took the manuscript with me, and stopping at a restaurant, continued to read. Again, I read with tears and chills, accompanied by a warmth in my heart for a man that I had only e-mailed a couple of times. To share this incredible story and the intimate details of some of the people that he has loved the most in this lifetime took such courage. Needless to say, the next morning the book accompanied me to the gym, and as I walked on the treadmill, I couldn't believe that I was walking, reading, and crying. As I was reading, I was amazed at some of the synchronicities in my life - hummingbirds, the song "The Wind Beneath My Wings", and a little heart printed on a blank piece of paper. These will all make sense while you are reading the book. I e-mailed Joel, once again, and told him he wouldn't believe the synchronicities, and I then said, "Yes, of course you will!" Neale and Nancy returned from their tour and while catching up on things, I told Neale that I had read Joel's manuscript and told him what I thought about it. They were about to leave for a tour of Korea and Euro

A Beautiful, Amazing Tribute to Love

Published by Thriftbooks.com User , 22 years ago
Joel Rothschild's book, Signals, is one AMAZING and AWESOME book. This book will change your life and profoundly affect how you think about life after death. Joel wrote this book after the passing of his much beloved friend, Albert, by suicide. The depth of their relationship was indeed one of soul mates. The love, passion, compassion, faith, and trust that are expressed in this story will consume you. The caring, kindness, and the wisdom that was and still is lived on a daily basis will leave you crying. Once you start reading this book, you won't be able to put it down!The soul connection experienced by Joel and Albert transcended death, as Albert "contacted" Joel constantly. This beautiful story proves that love endures, that there is nothing more important than love. Both of them had made an agreement to contact the other one after the first one had died. From beyond, Albert expressed so eloquently to Joel, "Know that each and every moment of life matters and that they are the same in many ways. Ways you have not yet seen. The good, the bad, the healthy days, the sick ones, happy, sad, bored, or thrilled - they are the same. With each and every breath, and in every moment of life, you are working things out, things that are connected to something far greater. You are part of something much bigger. We are all part of this larger purpose. Those kind people and those cruel people all have a purpose you can't possibly understand right now. Each and every person matters, and each and every moment matters. The painful ones included. We are all one." Albert's soothing words gave Joel the impetus to fight his disease, to find the peace he was searching for and to finally live in acceptance.Joel's incredible strength and determination helped him to surmount all of the "odds" given to him by his doctors on his impending death from AIDS in 1990. Albert helped them both to conquer fear and doubt by their faith in the belief "that this is not our path." The path was NOT one of dying and suffering, but of living. AIDS also gave Joel the opportunity to learn about forgiveness - forgiveness of others, but more importantly, forgiveness of one's self. Dr. Cohen helped Joel "see" by explaining to him that without forgiveness, we can keep the hurts inside "where they will fester and cause disease, or we can make the conscious choice to let go of them for our own sake." By letting go, Joel was able to bring restored health to his AIDS racked body. I applaud him on his extraordinary inner resolve and strength as well as on his openness for forgiveness and change. Joel is truly an inspiration to those of us trying to conquer our own challenges that life presents us. My tears of sorrow, turned to tears of joy for Joel.With Joel's continued "signaling" from Albert, he began to find that he was psychically beginning to receive messages from other souls that had passed, to be relayed to his friends or

Published by Thriftbooks.com User , 22 years ago
I loved this book! It brought tears to my eyes and gave me goosebumps!After the death of his beloved Albert, Joel acquired the gift of communicating with other people's spirits. He would walk by a stranger and get an overwhelming urge to give them a message from someone had passed on to the other side. I was particularly touched by his kindness and compassion towards people.One story I found particularly touching was about a young man who had lost his life partner to Aids. He was grief-stricken and could find no comfort from the emotional pain he was experiencing. Joel told him he had a five word message for him. This man went on to pour his heart out to Joel, sharing his grief, his anger and his pain. He told Joel how he cried out to his lover at night, "Can you hear me?"The five word message Joel had for him was, "Yes, I can hear you." Still gives me cold chills.I'm a huge skeptic but there was too much here to chalk up to mere coincidence. Not only were the signals that he received unmistakable, but the more I read this book, the more I was touched by what a wonderful, loving, affectionate, caring person Joel must be. Despite his own grief, he never hesitated to share his gift or to offer comfort to others who were hungry for some form of communication from those they had lost. I don't think I've ever met anyone like him. By the time I had finished reading the book, I thought to myself, "Wouldn't it be wonderful to actually know a man like this?" It's nice to know that there are people of his substance on the planet. Even if you don't pay heed to the signals, you are gonna fall in love with this guy! Awesome book! Buy it! You won't be sorry!

A TALE OF TRANSFORMATION AND HOPE, SURE TO BE A BESTSELLER

Published by Thriftbooks.com User , 22 years ago
Joel Rothschild's SIGNALS bristles with gut-wrenching emotion and artful simplicity. The author presents the facts of his experience of life after death, and allows the reader to draw his or her own conclusions. What makes SIGNALS different from any other book in this genre is the fact that the supernatural events that the author relates helped him to survive and endure seemingly unbearable suffering and tribulation. The after-death communications the author describes are not trite stories of wish-fulfillment, nor do they appear to be bereavement hallucinations. They are true stories of life after death. I feel that SIGNALS is a tale of strength, of overcoming adversity and presents to us a new kind of hero: a man who has the courage to tell the truth, to brave the reactions of a spiritually undecided and overtly skeptical nation to deliver his simple message of hope -- that life and love are eternal, and that no living person dare judge another man's love relationship again.

Signals, it's a book for all of us!

Published by Thriftbooks.com User , 22 years ago
I am fortunate to have recently met Joel, and to have read his book. This book is such a gift to all mankind, for the theme that runs through it is Love. I found it well-written, I couldn't put the book down after I started reading it. Signals has added something to my life that didn't exist before, a 100% belief in the awesome power of love and close friendships. I now look at each moment and try to find my own "Signals" to help me in life. Thanks, Joel!
Trustpilot
Copyright © 2022 Thriftbooks.com Terms of Use | Privacy Policy | Do Not Sell My Personal Information | Accessibility Statement
ThriftBooks® and the ThriftBooks® logo are registered trademarks of Thrift Books Global, LLC