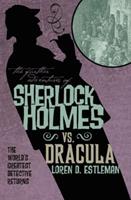 (Part of the The Further Adventures of Sherlock Holmes Series)

Sir Arthur Conan Doyle's timeless creation returns in a series of handsomely designed detective stories, encapsulating the most varied and thrilling cases of the world's greatest detective. After a mysterious schooner runs aground in an English harbor with no human passengers -- only the dead captain, drained of blood -- a series of bizarre nocturnal crimes takes place in London. It can only be the work of Count Dracula, and only one man can save...

Published by Thriftbooks.com User , 14 years ago
There are now any number of pastiches of Sherlock Holmes. The author himself alludes to this at the beginning of this book, noting that Watson's "lost" manuscripts seem to crop up everywhere; he then ruminates on the possibility that some of them are fake. The current story interweaves Holmes with Count Dracula and his antagonists, Harker, Dr. Van Helsing, and the rest. The author (Watson, of course) insists that Stoker's account unfairly leaves out Holmes' part in thwarting Dracula's scheme to move to England. The book revolves around Holmes and Watson pursuing Dracula, and includes a chilling episode where the count visits Baker Street to try and talk to Holmes and convince him to stand aside and allow him free reign. This is an interesting story, and it's a reasonably good pastiche. I enjoyed it, though it seems a bit thin in terms of plot.

Published by Thriftbooks.com User , 14 years ago
First published in the late seventies, this is generally recognised as one of the all time classic Holmes pastiches. Yes you can quibble that Holmes was squarely a non-believer in the supernatural but it's hard to resist this pairing of the Great Detective and the Lord of the Undead. If you go with the notion and let the story transport you there is great fun to be had. I disagree with the opinion that Holmes has no point of entry into the case and I certainly rank this as superior to Saberhagen's 'Holmes-Dracula Files'. Inevitably Holmes cannot vastly change the outcome of the Dracula story (that really would be cheating). But where this problem completely undermines a book like Manly Wade Wellman's ' Sherlock Holmes' War of the Worlds', in which Holmes really does nothing at all but run around and make observations without truly interacting with the story, Estleman cleverly keeps Holmes involved behind and between the scenes of the events in Stoker's novel, making him an active player depite the limitations inposed on him. The writing has verve and pace and there's a real love of the characters on display (as evidenced by the fact that Estleman has gone on to contribute a number of Holmes short stories to the annual Martin Greenberg collections as well as the excellent follow-up to this novel, 'Dr Jekyll & Mr Holmes'). Loren Estleman is a superior writer across several genres (check out his Amos Walker novels for some top-notch P.I. writing). and this terrific book has neither dated nor been surpassed in nearly thirty years since it appeared. There are lot of bad Holmes pastiches out there, but if you want the real deal, this is the place to start.

Published by Thriftbooks.com User , 18 years ago
If you can suspend your disbelief that Sherlock Holmes can be convinced that vampires exist, then you'll have great fun with this novel. Author Loren Estleman has done a good job in replicating the tone and style of the Conan Doyle stories, and the way that he uses Bram Stoker's novel as the background for this story is very clever indeed. As anyone who has read Dracula will know, Dracula is "off-screen" for most of the book and Estleman has used this to his advantage. So while the characters in Stoker's book are dealing with the consequences of the largely unseen Dracula's actions, Holmes and Watson are dealing with him directly in London.If you are a Holmes and Dracula fan, you should enjoy this book enormously. I had a great time reading it, and I definitely recommend it.

Published by Thriftbooks.com User , 18 years ago
A rather clever retelling of the Bram Stoker tale with Holmes as a character, narrated, of course, by Watson, and purporting to be a part of the main canon. Estleman is good at recreating the Holmesian aspect: the boughs howling in moonlit graveyards, the gas-lamps' blobby light in thick fog, etc. He's done his research as to the period and the writing style, and it does work. (Less present is the macabre horror of Stoker's novel.) On the whole, it's a great idea, and the book presents Victorian thrills and action and chase scenes aplenty. Only the end of the book is a disappointment: in order not to rewrite too disruptively the Dracula side, Esteleman must leave Holmes out of the finale altogether, making for a rather anticlimactic ending.

When I noticed the title I was skeptical?.then I read the bo

Published by Thriftbooks.com User , 20 years ago
I had gone to my local bookstore to see if the most recent Sherlock Holmes story by Larry Millet was in yet. I happened upon "Sherlock Holmes Vs. Dracula". As much as I enjoy books about the great detective I was skeptical when I noted the title. Still, I decided to take a chance and purchased the book. What a find! My money was well spent. Holmes and Watson are matched against a totally different for than ever before. The plot moves along a good pace (or trot) and the author manages too never stretch into the unbelievable. I only regret the next Holmes story by this author will not be in print for a year. I am looking forward to it.
Copyright © 2020 Thriftbooks.com Terms of Use | Privacy Policy | Do Not Sell My Personal Information | Accessibility Statement
ThriftBooks® and the ThriftBooks® logo are registered trademarks of Thrift Books Global, LLC