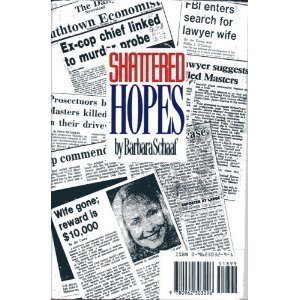 Shattered Hopes: A Contemporary Tale of Marriage, Murder, Corruption and Cover-Up in the Suburbs

Describes how Alan Masters enlisted the help of two police officers to kill his wife, Dianne, and recounts their capture and trial.

Riveting! Sordid! Shocking! (…and that’s just from the front cover)

Published by Anthony Wiggins , 1 year ago
I was drawn to this book by way of the Lifetime movie that this book is based upon “Deadly Matrimony” (1992). I have yet to read this book (as it hasn’t arrived), but if the movie was anything to go by, this book is gonna be sensational!

Published by Thriftbooks.com User , 13 years ago
Arrived on time in good condition. Enjoyed the book, didn't realize the amount of corruption in the Chicago area PD and Sheriff's office.

Published by Thriftbooks.com User , 19 years ago
Schaaf writes a heartbreaking tale of continuous crime and corruption within the law enforcement agencies and the judicial system with this story. No doubt she spent a great deal of time with the preparation and research in writing SHATTERED HOPES. The acknowledgments are quite extensive to those who assisted in this writing endeavor, and I do highly recommend this nonfiction piece of work as a very good read. The murder of Diane Masters in 3/82 is still an open file, even though the persistent investigation of then Sgt. John Reed of the Cook County Sheriff's office eventually landed convictions for Diane's husband, Alan Masters (an attorney) and his two accomplices, Corbett (a former Chief of Police) and Keating (a former Cook County Sheriff's lieutenant). The sad part about this is that the convictions didn't happen until 1989. The strong arm of the law moves at a snail's pace, especially when that's what those involved expect. Even so, the file still remains open and no one was actually charged with Diane's murder. Convictions were handed down for bribery, taking payoffs, case fixing, conspiring to murder Diane Masters, aiding, abetting and soliciting her death that brought forth twenty year sentences, as well as a fine for Alan Masters. Sadly to say, however, Reed's involvement in the investigation managed to get him removed from his investigator's position, which was a true slap in the face for doing his job. It wasn't until 7/93 that a major shakeup in the Sheriff's office saw Reed being taken off the shelf and promoted to lieutenant. Reed's previous demotion for a job well done is a prime example of what can happen to an honest cop trying to do the job right; proper enticement, no doubt, for making a good cop want to turn his head the other way when corruption within the brotherhood is staring them in the face. Schaaf's research had her making note of more crime and corruption that was exposed by a FBI sting operation dubbed as OPERATION GREYLORD. If you haven't read this true story about Judge Brocton Lockwood, then do yourself a favor and try to find a copy somewhere. I dearly value mine. In 1978, after being newly appointed as an Associate Circuit Judge in Southern Illinois, Lockwood was expected to serve a six-week stint in Chicago to help reduce the backlog of cases in the Cook County system. Lockwood was quickly made aware of the official corruption and misconduct running rampant in the judicial system, stating that bribery was an open, established practice ruled by bagmen. Court decisions were bought and sold like commodity futures. As Lockwood's story was being written, it had been four years since the GREYLORD prosecutions began. At that time, 70 persons to include 11 judges, 38 lawyers, 7 police officers, 10 deputy sheriffs, 3 deputy clerks, and a court-appointed receiver had been convicted. OPERATION GREYLORD is truly a fascinating and revealing story into the crime and corruption of a judicial system that apparently ha

Published by Thriftbooks.com User , 23 years ago
and jealousy. "Shattered" recounts the stormy marriage of Chicago area lawyer for the mob, Alan Masters, and Dianne Masters. Alan was known in his circle as "The Fixer" for the mob and anyone else who wanted out of legal trouble and did not care how it was done. Dianne had tired of her violent, abusive husband and had sought the company of a college professor--a big mistake, since her husband reserved this extra-marital privilege only for himself. Ms Masters was days away from her divorce when she disappeared in March of 1982. Six months later her car was retrieved from a canal and her decomposed body was discovered in the trunk. There were two bullet holes in her skull.Alan Masters and his friends in the Cook County Sheriff's office might have escaped punishment if it weren't for the efforts of one incorruptable police officer, John Reed and federal prosecutors. I found this book intriguing and sad--because of Dianne's near escape from a horrific marriage, and her efforts to rebuild a new life for herself and her daughter; and also frightening because of the corruption of the police. .the very people you expect to trust if you're in trouble. The fact that one of the officers, Michael Corbitt, fired 2 fatal shots into Dianne's head, is horrifying. Fortunately, justice prevailed and Masters, with his co-conspirators, was convicted of conspiracy to commit murder. They are all serving lengthy prison sentences.

Published by Thriftbooks.com User , 23 years ago
A captivating, yet frightening true tale of the murder of a woman who loved not wisely--she married Alan Masters--but too well. Dianne Masters was in way over her head, and with a naive belief that she could escape Masters deadly grip, she instead fell victim to his rage. Yet this story offers hope in the determined efforts of John Reed to uncover the corruption that made Dianne Masters murder by her husband and a sheriff's police officer possible. Fascinating most of all because the story is local, with underworld figures populating the the backdrop of Chicago politics. I recommend this for a good read. It's sad, frightening, fascinating, and true. Fortunately, Masters and his "buddies" did not get away with murder. They are now serving long sentences in prison.
Trustpilot
Copyright © 2022 Thriftbooks.com Terms of Use | Privacy Policy | Do Not Sell or Share My Personal Information | Accessibility Statement
ThriftBooks® and the ThriftBooks® logo are registered trademarks of Thrift Books Global, LLC