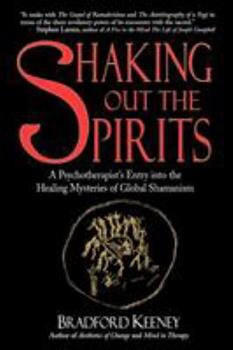 Shaking Out the Spirits

Bradford Keeney's extraordinary odyssey began in 1963, when, as a respected professor, psychotherapist, and author, he found himself suddenly visited, without the influence of hallucinogenic drugs or shamanic teachings, by remarkable visions of "shamanic realities" that called him to some of the most remote areas of the world. Shepherded on his journey by the spirit of the Oglala Sioux medicine man Black Elk (whose time of death was virtually the...

Gutsy guy to show himself at odds with conventional psychotherapy.

Published by Thriftbooks.com User , 11 years ago
Kenney's life was made very difficult for years because he felt that he would be severely ostracized by his peers if they were aware of his interest in shamanism. And, he knew human nature, as it turns out. His beliefs are, after all, a tremendous threat to a field of healing that has failed much more often that it has succeeded in healing. What is the surest way to turn others against a man than to accuse him of a lack of humility?

Published by Thriftbooks.com User , 16 years ago
I will put forward my impression of SOtS, perhaps at the risk of appearing somewhat of a devils advocate. I am of two minds about this book - there can be no doubt about the sincerity of Keeney's experiences, the depth of his insights, or the beauty and magic of the life that he has chosen for himself and that he describes in SOtS. I will leave these to be pointed out by other reviewers. However, beyond the most mundane clichés, I see very little connection between Keeney's experiences and psychotherapy as we know it or ecology. In this book Keeney describes his journeys around the world. Perhaps my greatest reservation with this book is that the man is like a butterfly - he constantly flits from one shaman to the next, never learning a tradition or a ceremony, never learning anything, really. His shamanic practice basically consists of a mediumship, where his body/mind is taken over by assorted "spirits", accompanied with shaking, speaking in tongues and total loss of conscious control. This, as one can imagine, can lead to humorous situation in a Native American sweat lodge, one of which Keeney was unceremoniously expelled following his antics, but is received with great affection and respect in different African traditions, including those of the Zulu, Bushmen and African-Americans. The descriptions of his meetings with Bushmen were particularly poignant and beautiful. The downside of mediumship is, I suppose, that one never really learns a technology of working with the alternate reality (whatever it is), or with energy. Moreover, this has nothing to do with psychotherapy, which strives for conscious control (rather, letting go) and understanding of subconscious complexes and contractions. The psychotherapeutic theory in the book is, at best, rather simplistic; K is simply not interested in it. Given his experiences, I can see why. Although Keeney is very good at playing the humility game, he can't help mentioning throughout the book how assorted indigenous people called him "a very holy man, indeed". Heh... yeah! There are many photographs in the book of the medicine people he met and perhaps 70% include the humble holy man Keeney himself. These comments notwithstanding, here is a man with the guts to meet all kinds of interesting people and to talk about his innermost sacred experiences to the whole world. This in itself, I believe, something worthy of respect.

Published by Thriftbooks.com User , 20 years ago
A fantastic story about one person's journey into spirit! Bradford has been guided by his waking and sleeping dreams and visions, to journey to sacred teachers in the United States,North, South, and Central America,Africa, and Japan. The message is one of global healing and love, through shamanic and universal eyes. May your life be as magical and full. This book will be a catalyst to your spiritual journey. One of my top 10 favorite books. Inspiring, exciting,transformational. It knocked my socks off and knitted me another pair. :) In Spirit, Sakanta Running Wolf, Th'e Chupe ke ya ka Pah, Walks in Freedom

A Westerner's immersion into the world of indigenous healing

Published by Thriftbooks.com User , 23 years ago
Dr. Keeney, a well-known author and teacher in psychotherapy, writes a moving story of his own journey in and through the shamanic circles. His lifetime of call to know the people, ideas, and experiences of the spiritual realm lead him from the sweat lodges of the Lakotah to the Kalahari Desert bushmen, from the healers of South America to the wisdom-keepers of Japan. This book will frighten some, enlighten most, and expand the possible for all -- I highly recommend you read this as both anthropology and autobiography. Frank Thomas, PhD
Copyright © 2020 Thriftbooks.com Terms of Use | Privacy Policy | Do Not Sell My Personal Information | Accessibility Statement
ThriftBooks® and the ThriftBooks® logo are registered trademarks of Thrift Books Global, LLC