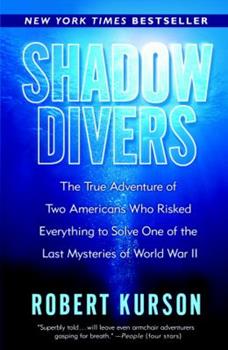 Shadow Divers: The True Adventure of Two Americans Who Risked Everything to Solve One of the Last Mysteries of World War II

New York Times Bestseller In the tradition of Jon Krakauer's Into Thin Air and Sebastian Junger's The Perfect Storm comes a true tale of riveting adventure in which two weekend scuba divers risk everything to solve a great historical mystery-and make history themselves. For John Chatterton and Richie Kohler, deep wreck diving was more than a sport. Testing themselves against treacherous currents, braving depths that induced hallucinatory effects,...

Published by C.M. Bishop , 1 month ago
Shadow Divers centralizes on John Chatterton and Richie Kohler, the two scuba divers that changed history on their friend Bill Nagle’s boat, the Seeker. Chatterton had a more scientific approach to diving, such as studying the ship’s blueprints and figuring out how it sunk. On the other hand, Kohler loved taking artifacts from sunken vessels. But both respected the sport of deep-sea diving and each other’s love for it. They wouldn’t dare mess with the bone remains of the men who perished on the vessels. Some of the Seekers’ crew switched out for other expert divers on the expedition. Chatterton and Kohler were the two who saw this through to the end. To these men, it was more than just getting the glory for finding the submarine; it was about identifying it, so the men’s families had some closure. I respect these men for their heroism and all the research they did to achieve their goals. A diver that dives hundreds of feet below the surface needs instinct, intelligence, tenacity, conviction, a plan, and communication to survive. Numerous risks come with deep-sea diving: nitrogen narcosis, equipment failure, shortness of air, exposed wires, collapsing escape routes, fins brushing the slit, making an opaque scene. The list of perils can go on for days. Each could lead to a diver’s death, but Chatterton and Kohler risked their lives every time. Any dive could have ended their life, and it was all to uncover the identity of a mysterious U boat, nicknamed the U-Who. Chatterton and Kohler believed they were on “an amazing adventure” (p. 232). Kohler’s words about their discovery were ironic: “I gotta say, this is a mystery like you read in a book” (p. 185). The men did a great job documenting when they dove for which ship on which month, day, and year and what they found. It takes dedication and persistence to do what these two men had done. Chatterton ran into many dead ends before finding the one clue to solve the mystery. The excitement of uncovering a new submarine site thrilled the men. They were willing to risk death to solve the mystery. As the years progressed, Chatterton used more enhanced equipment on his dives, such as “trimix” and rebreathers. “Trimix” is an exciting way that helps divers stay underwater longer without the effects of narcosis weighing them down. It was interesting to look into the lives of the dead German soldiers and find that not every German agreed with Hitler and his ideology. It took six years of strategical planning for Chatterton and Kohler to uncover the identity of the U-Who. It was interesting to see Chatterton’s and Kohler’s lives after discovering the mystery that haunted them for six years. The images and information are greatly appreciated; they help enhance the imagery. My only critique is I would have moved all the pictures at the end of the book. When I read their descriptions, I noticed one of the pictures actually spoils a part of an upcoming scene. After reading Shadow Divers, I realized how much research and interview time went into this book. I praise Robert Kurson for the extent of his research. I know it takes a lot of research and time to write a book. I hope the lost souls of U-Who and the fellow divers (who died attempting to recover the sub’s identity at the 230 ft depth) rest in peace. Shadow Divers is my favorite creative nonfiction book, and Robert Kurson is my favorite creative nonfiction author.

Published by Devon Crump , 6 months ago
This book had me glued to it, the story telling by Kurson is so good. The mystery aspect of it is fantastic, and the way he writes the dives literally made me hold my breath and feel like I was down there as well, its very immersive.

Published by Thriftbooks.com User , 5 years ago
An excellent author + one of my favorite subjects = a book hard to put down. This is not a page skimmer, far from it as the author includes in this true story the search through history files, far reaching interviews and a rare glimpse of the divers lives and thoughts while operating under terrifying conditions. Top shelf read. KUDOS to Robert Kurson, an intelligent, compassionate giver who seeks to expand our knowledge of history, courage and the human experience, both good and bad. Can't wait to read another one of his books. I am a 76 years old Mother and Grandmother. True stories are much better than Fiction. C. Black

Breakout work by a gifted Storyteller

Published by Thriftbooks.com User , 17 years ago
This retelling of true events is as good and as close as you can get to the excitement of made up fiction. Admittedly the author, Robert Kurson, had good material with which to work, but a writer of lesser talent could have easily botched this little gem of an opportunity. As it is, Kurson's ability to grab the reader and maintain his/her full attention throughout a story that spans more than six years, is a testament to his writing prowess. Kurson puts us in the center of the action as we learn about the discovery of a mysterious submarine shipwreck--not one of ours--just 60 miles east of Pt. Pleasant, NJ. In nautical terms this is literally in our backyard. Resting on the bottom of the ocean at 233 feet, it is a depth that is tantalizingly close, yet dangerously deep and accessible to all but a few of the most experienced deep diving specialists. Central to the story are the truly larger than life main characters: hard drinking rough hewn John Nagle, Captain of the dive-boat and world renowned wreck diving legend; two peas in opposing pods, John Chatterton and Richie Kohler, wreck diving enthusiasts who idolize Nagle and only hope to share in some of the excitement that he has experienced in the past; and a rather odd assortment of other players who come and go at different times. Along the way we witness relationships destroyed, marriages ruined, jobs forfeited, sanity questioned, and even lives tragically lost, all in the single minded pursuit to solve a seemingly unsolvable puzzle. Kurson pulls it all together nicely, and without revealing the end, I will just say that this book is a richly rewarding experience for the reader. Good books like this leave me wanting to know so much more about the characters, sort of "where are they now?" Fortunately, the adventures experienced by these fascinating men don't end with the telling of this story; John Chatterton, and to a lesser extent Richie Kohler, can be seen quite regularly on the History Channel as the hosts of the Deep Sea Detectives docudrama television series.

Published by Thriftbooks.com User , 17 years ago
Bought it on a whim having no real interest in wreck diving or even scuba diving. It's one of the best whim purchases I've ever made. This book reads like a suspense novel and I couldn't put it down. The story alone is facinating, and Kurson's presentation makes for a wonderful read.

Exciting even when you know the outcome!

Published by Thriftbooks.com User , 17 years ago
This is one of those rare books that you know within the first dozen pages it's going to be a great read and you're going to be disappointed when it ends. Robert Kurson's tremendous research combined with a great historical narrative style results in learning not only about the lives of the living players such as Chatterton and Kohler, but the dead sailors on the submarine as well. While this is Kurson's book, you can see the extensive contribution provided by Chatterton, Kohler and others who shared the experience. This book fits beautifully with "The Last Dive", which I reviewed here a few years ago. I did learn things here, which surprised me relative to "The Last Dive". I thought they had been doing mixed-gas diving much longer on U-869 then just before the Rouse's arrival. Chapter 2 is about the dangers of wreck diving and sets the stage of what to expect throughout the remainder of the book. Kurson makes sure the reader understands this wasn't just a bunch of treasure hunters looking for some "stuff". These guys respected this dive site as sacred resting place for these German sailors and their actions (including their own research) supported that belief. And in the end, I was right...it was a disappointment to see it end.

Published by Thriftbooks.com User , 18 years ago
My reading tastes have always been fiction: action, adventure, thrillers, and since going away to college two years ago I have not had time for any fun reading, But started this book last week and then could not put it down. It is TRUE action adventure! This is the story of two deep sea wreck divers who dive into a long lost wreck in over 200 feet of water, which they identify as a German U-boat. The book follows the lives of these two men as they attempt to discover the identity of the U-boat and discover things about themselfs. There lives are greatly changed by the discovery, Jobs changed, marriages lost, diving companions killed on the wreck, and lost to the bottle. The story is more than just about the men's dives on the wreck and there attempt to discover its identity, and the adventure involved in such an endeavor, but also about the characters (which are rich in this story) involved, the history behind the boat and Hitlers 3rd Riech. there is so much to learn on every page. In the end though it is the under water action that kept me enthralled. If you read this book you will gain an appreciation of the wonders and dangers of deep water diving.
Trustpilot
Copyright © 2022 Thriftbooks.com Terms of Use | Privacy Policy | Do Not Sell My Personal Information | Accessibility Statement
ThriftBooks® and the ThriftBooks® logo are registered trademarks of Thrift Books Global, LLC