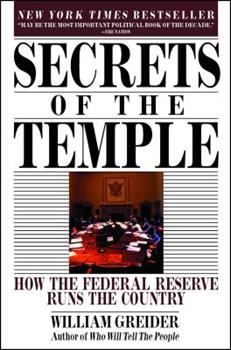 Secrets of the Temple: How the Federal Reserve Runs the Country

Published by Thriftbooks.com User , 19 years ago
One might think of William Greider's "Secrets of the Temple: How the Federal Reserve Runs the Country" as "Central Banking for Poets." If you've ever scratched your head in wonder when reading how Alan Greenspan and the Fed have "lowered interest rates" or are "easing monetary policy," this book will be extremely enlightening and well worth the time it will take you to plow through all 700 plus pages. If (like me) you majored in economics, you'll be surprised how much better Greider is in explaining arcane economic theory than your college professors (and you'll probably learn -- or re-learn -- quite a bit in the process).The focal point of the book is the celebrated and controversial tenure of Federal Reserve Chairman Paul Volker (1979-1987), but the mechanics of central banking so clearly and concisely explained are just as much applicable today as in 1980 - or 1950 for that matter. Greider divides the book into three more-or-less equal thirds. The first covers the inflationary surge of the 1970s, Carter's tenuous decision to appoint Volker, and Volker's radical move of abandoning the control of interest rates in favor of controlling the nation's money supply. (In other words, a shift from the Keynesian orthodoxy dominant in the post-War period in favor of a monetarist approach more in line with the theories of the iconoclastic economist Milton Friedman.) The second, and most informative third provides an historical overview of central banking and its development in the United States. For those solely interested in a better understanding of central banking and the US Federal Reserve in particular, this book will be worth your while even if you only read this middle section. The final third deals with Volker's punishing monetary policy during the early 1980s, as he attempted to destroy lingering anticipation of inflation and the incredibly simulative effects of the Reagan era federal deficits and tax cuts.Greider is highly critical of Volker's performance as Fed chairman. In short, he argues that far from being the independent and benevolent Shepard of the economy it often claims to be, the Fed, in practice, is beholden to its most powerful constituency: the major money-center financial institutions (i.e. Citibank, Bank of America, etc.). Traditional central bankers view combating inflation as their primary professional objective, which tends to favor creditors at the expense of debtors. Grieder suggests that in waging war on inflation the Fed in effect was waging war on the millions of ordinary Americans struggling to make end meets and keep their heads above water.Whether you agree with his conclusions or not, Greider's "Secrets of the Temple" is exhaustively researched, expertly written, and extremely enlightening.

One of the very best books I've read in my life

Published by Thriftbooks.com User , 19 years ago
I'm not going to recap the book contents; others, who have read the book more recently, can do a better job of that. I will tell you, instead, about its long term impact.It's been probably fourteen years since I read _Secrets_of_the_Temple_ and it still haunts me as one of the most important, most influential books I've read in my 46 years of life.The common beliefs that the Fed is near infallible, that it always knows what it is doing when it takes action, and that 80 years since the last Depression is proof that the Central Bank will always pull us through are more mistaken than most people would believe. Reading the history of Central Banking will open your eyes considerably, I think. Oh, yes, and this book is actually a pleasure to read -- it's that smoothly written.

The Federal Reserve Isn't What It Appears To Be

Published by Thriftbooks.com User , 20 years ago
Although I read this book years ago I'm reviewing it today because I perceive it is very important that more of us understand money, our monetary system and the intersection between money and power. Recent financial meltdowns in Thailand, Russia and Argentina provide a roadmap of the risks we face and which could be coming home to roost.William Greider's book is a good introduction to the system. It's well written, informative and easy, entertaining reading. Early in the book he asks a question about why it is that during the period leading up to the end of the 19th Century "Money and Monetary Systems" were hot topics in American political life, but today they are really off the radar screen? That's a good question. Do you know the answer? I'd bet the answer is you, like most Americans probably don't. This book will give you the understanding you owe it to yourself to get. After all, it's your money.

Secrets of the Temple - William Greider

Published by Thriftbooks.com User , 22 years ago
While this book dismisses in one paragraph the idea that the Federal Reserve System was born of a conspiracy, it than goes on for over 700 pages to describe in fascinating detail the operation of, what must surely be the most sinister conspiracy ever hoisted upon mankind, the Federal Reserve System. The author is not a conspiracy theory kook or a John Birch society member, but rather an ex Editor of the Washington Post. The book is endorsed by Ted Kennedy, The Washington Post, and the NY Times, all noted for their liberal bent. It is not a politically motivated book but rather a shocking expose of the organization of banks that controls our economy and the worlds. Instead of "and that government of the people, by the people and for the people", the Federal Reserve system has made it "government of the banks, by the banks, and for the banks shall not perish from the earth". It is clear from reading this book that our economy and the world's economy is controlled by a handful of very powerful bankers. Our President and Congress have abdicated all responsibility via the Federal Reserve act of 1914. As Meyer Rothschild, Europe's premier Central Banker, said, "Give me control of the issue and value of money and I care not who makes the laws". Our government has no say whatsoever in the direction our economy is taking or for that matter how much of our money (printed by the Fed) is loaned to foreign countries. The banks have complete freedom to loan whatever amounts they choose to whichever countries they choose. If the interest on the loans cannot be repaid, they simply have the Fed print more money to loan enough to pay the interest. This book makes it clear that our entire financial system is built on a house of cards for the exclusive benefit of the banks that control it. They benefit in boom times and when there's depression and they are solely responsible for both. If you're concerned about your economic survival, your own personal freedom and our country, you should read this book. It wil enlighten you and also frighten you.

Published by Thriftbooks.com User , 22 years ago
Greider presents a lively overview of the Federal Reserve System, illustrating its role in the global economy, and the global interests it serves. Greider presents a fascinating history of the Fed and banking system from the Populist uprising of the late 19th century to the global finance system we live in now. The book shows the truly immense power weilded by the Fed. EVERY AMERICAN SHOULD READ THIS BOOK!
Trustpilot
Copyright © 2022 Thriftbooks.com Terms of Use | Privacy Policy | Do Not Sell My Personal Information | Accessibility Statement
ThriftBooks® and the ThriftBooks® logo are registered trademarks of Thrift Books Global, LLC