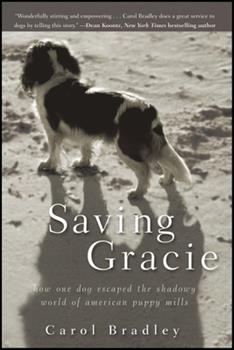 Saving Gracie: How One Dog Escaped the Shadowy World of American Puppy Mills

A compelling true story of one dog's rescue from a Pennsylvania puppy mill This touching narrative uses the poignant makeover of Gracie, a sickly Cavalier King Charles Spaniel, to tell the story of America's hidden puppy mills-commercial kennels that breed dogs in horrific living conditions and churn out often-diseased and emotionally damaged puppies for sale. Saving Gracie chronicles how one little dog is transformed from a bedraggled animal worn...

Shines a light on the horror of puppy mills

Published by Thriftbooks.com User , 11 years ago
I read this book in one sitting and as a dog owner had strong feelings. It is part expose of PA. and it's puppy mills and part heart wrenching personal story of Gracie, a survivor of the mills. Anyone who has adopted a mill survivor (as I have) will love this book and certainly identify with Gracie's story. A wonderful and important book!

I Have a Puppy Mill Dog

Published by Thriftbooks.com User , 11 years ago
Well, I'm pretty sure she is. I live in Central PA, surrounded by many of the puppy mills discussed in this book. I've passed the billboards showing the inside of a dishwasher, telling us that a dog is allowed to live in a crate this size for their entire life. Linda Jackson, Gracie's owner, and I have been friends for many years. But I have to admit, I've turned a blind eye to the horrific problem of puppy mills. Like many of you, I read the stories, heard the news reports and could not believe that this horrible treatment of animals was going on so prolifically in my state. I just didn't know what to do about it. Like many things, it feels like an overwhelming task for one person to delve into. But there is hope, as is evident by many of the heroes in Carol Bradley's book. Bradley writes in an easy to read methodical way, giving facts to illustrate the problem balanced with the personal stories of specific dogs, like Gracie. Let's be clear though, Gracie's story is not the focus of the book but the thread that weaves its way through the big picture of the abundance of puppy mills and the greediness of their business owners. Many of the stories are so sickening that it is hard to believe people can treat animals with such callousness. But if you've ever watched Animal Cops, you know that many people don't have a conscience and treat their animals worse than dirt. As an avid animal lover, a regular contributor to WWF and other animal welfare groups, it is hard to think of the thousands of animals suffering every day. Which brings me to Izzy - who by the way is my profile picture. Our 14 year old standard poodle had been gone for about two years. Our son was 8 and our daughter was 3. We don't live in a "neighborhood" so it was important to me that my children had some other companionship. We needed a non-shedding dog for allergy reasons. I had been calling our local humane society for a while asking about poodle type dogs and there was nothing for months. I looked at some other animal shelters in nearby counties and many of them had regulations for only adopting to local residents. Nearby was a locally owned small pet store run by two very nice sisters. Personal pets often roamed the store, there was usually only one or two dogs at the store and a few rabbits and guinea pigs. They were friendly, cared about animals, sold good products and their small store was always immaculate. Driving by one day their sign read, "standard poodle". I stopped in and found a beautiful ball of cream colored fuzz and sloppy kisses. This three month old standard poodle was such a sweetheart and bounced around the store going "shopping". The owners would let her walk around and pick out a treat or toy. She was just what we wanted and had been at the store for a month already. After talking it over with the family, Izzy came home with a guarantee, vet papers certifying shots and deworming and a registration showing her parent's names (and her favorite toys

Must Read for All Animal Lovers

Published by Thriftbooks.com User , 11 years ago
The sometimes secret and shadowy world of puppy mills is exposed by this book. You will be shocked at the horrendous way that some breeders treat their dogs. As sad as the situation was and in some cases still is, the book shows that with a lot of money, patience and care, some puppy mill dogs can be restored to reasonable health and happiness. Some can never be restored after years of abuse and neglect. The physical abuse is bad enough, but puppy mill dogs suffer immense emotional abuse as well. Only through the efforts of caring people can these places be shut down. Many have been stopped with stronger legislation and the efforts of caring people, but I think the book makes it clear that we have to be ever watchful and not do things that allow the puppy mills to flourish. Adopt an animal from a local humane society and don't insist on a purebred. Mixed breed dogs are often just as wonderful than full breeds. They tend to be healthier and often have better dispositions. The book is an easy read at just 200 pages in my advance copy. It's a good book for high school kids who might want to get active in protecting animals. Younger children might be able to read the book easily, but could be disturbed by the terrible treatment that is described in the book. A must read for any adult who cares about dogs and animals. At the end of the book is also information on how you can get involved and make a difference. Very well written and hard to put down. You may well read it in a single sitting.

Published by Thriftbooks.com User , 11 years ago
I agree with another reviewer that the focus of the book in not primarily on Gracie, but the story of Gracie and other innocent victims is featured. Like nearly everyone, I knew that puppy mills existed. What I didn't realize is how many exist. I had no idea there were so many humans capable of treating animals this way for profit. The book contains a great deal of information regarding a specific case and much more information about the type of neglect, abuse and cruelty that permeates the "for profit" industry. In a perfect world, this book would be required reading in grade school or junior high to assure that future pet owners choose to NOT support this horrible industry. If more people realized where those puppies really come from and what the parent dogs endure throughout their horrific lives, there would no longer be a market for the end product. The heartless people who profit from this misery would be forced to find another way to earn a living and millions of animals would be better off. Hopefully more people will choose shelter or rescue animals for their families in the future. I would recommend this book to everyone who cares about animals, especially those people who are thinking of acquiring a family pet. As to the people who run puppy mills, I wish them as much joy as they've provided the animals they own.

Five stars out of five

Published by Thriftbooks.com User , 11 years ago
Anyone who has even a passing interest in animals, has most likely heard about puppy mills. We've seen stories about rescued animals on Animal Planet , we may have read newspaper articles, we may even have helped out with an animal rescue that was removing pets from horrific circumstances. I thought - because of the title - that "Saving Gracie " would be an intimate story about one dog rescued from a puppy mill, and in part the book is about this. However, it is more about the atrocities that take place in puppy mills in general. Author Carol Bradley was able to stitch both parts of the story together - Gracie and puppy mills - to create a patchwork quilt of a complete story. A job well done. Gracie's story is affecting as is Gracie's new owner's (Linda), story. Linda had hoped to rescue a pet that would be all she and her three children had expected. A bouncy, healthy, beautiful little dog they with which they could all love and play with. Due to Gracie's past abuses, however, Gracie didn't fulfill their wishes. Still, Linda persevered due to her devotion to Gracie. The rest of the novel is an expose about the business of puppy mills. It's heart rending enough to bring tears to your eyes, business like enough to make the reader want to know what he/she can do to help alleviate the situation, and well written enough to keep one's interest and trust the author. Saving Gracie opened my eyes to something I hadn't thought about, although I've adopted several rescued pets. Pets from puppy mills have, in some cases, a very long history of abuse. Physical pain, many medical afflictions, and something maybe we don't consider, mental anguish. These problems can cost new owners thousands of dollars to try to correct, years of frustration and mental anguish of their own while trying to help their new pets recover. (Bless those who are willing to take on puppies rescued from puppy mills.) I appreciate this book because it describes the conditions of the mills and the pets accurately enough to let us know what being in a too small, wire cage at the bottom of several cages stacked above without food, water, human contact and proper care could feel like, yet the descriptions aren't so horrific that I had to stop reading. Softie that I am - I could take the facts. The descriptions were upsetting enough to make me mad and ask - "What can I do to help stop this?" I think that's a good place to be. The book ends with sections titled: *Finding the Right Dog *If you Do Buy a Dog on the Internet *Adopting a Puppy Mill Dog *Reporting Bad Breeders All fact filled pages with good advice. I give Saving Gracie: how one dog escaped the shadowy world of American puppy mills five stars out of five. And Gracie herself has a very happy ending that may surprise readers. Bravo! Author Carol Bradley is an award-winning former newspaper reporter and has spent 26 years covering the U.S. Congress and state legislatures in Tennessee and New York
Copyright © 2022 Thriftbooks.com Terms of Use | Privacy Policy | Do Not Sell My Personal Information | Accessibility Statement
ThriftBooks® and the ThriftBooks® logo are registered trademarks of Thrift Books Global, LLC