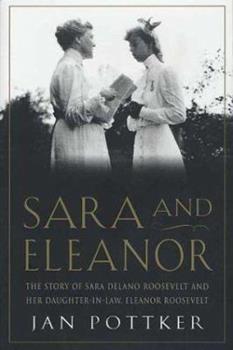 Sara and Eleanor: The Story of Sara Delano Roosevelt and Her Daughter-In-Law, Eleanor Roosevelt

We think we know the story of Eleanor Roosevelt - the shy, awkward girl who would redefine the role of First Lady, becoming a civil rights activist and an inspiration to generations of young women. As legend has it, the bane of Eleanor's life was her demanding and domineering mother-in-law, Sara Delano Roosevelt. Biographers have overlooked the complexity of a relationship that had, over the years, been reinterpreted and embellished by Eleanor herself.Through...

Published by Thriftbooks.com User , 13 years ago
...and certainly disagreed with the fellow who pompusly states that the book is not for serious scholars, is superficial, etc. Does he speak with the Voice of Authority? Being a "History Major" and with the arrogance of youth, he (or perhaps wishes, as gods are entitled, capital letter, ok He) knows everything of course. The actions of Sara Roosevelt, and her many many letters, speak for themselves, the author did not make them up or create them from air. This was a marvelous woman, and it's about time someone spoke up for her. As for the book, I found it most interesting and enjoyable.

It's all Mother's Doing

Published by Thriftbooks.com User , 13 years ago
Very informative, certainly showed another view of Eleanor. While Eleanor may be changed her view of Sara in her (Eleanor's) later years, it apepared to me that the Eleanor we love would not have existed without Sara's influence. I was surprised that Sara has been so much forgotten by history, not that Presidential mothers are often remembered. It lent great insight to Eleanor and FDR also. Certainly Sara was a 'lady' in the very old sense and also a woman who could and did change with the times. I found it enjoyable and would recommend it to anyone with an eye for history, politics and the Roosevelts and well as women of influence.

An admiring look at a formidable woman, and her son's wife

Published by Thriftbooks.com User , 18 years ago
Who among us wouldn't want to have been Sara Delano Roosevelt? Adored daughter and sibling, independently wealthy through her father's success in the Chinese opium trade, married to an older man whose forebears were as securely rooted in America as her own, she became the mother of one perfect child who grew up to be Franklin Delano Roosevelt.Self-doubt was not in the emotional vocabulary of either of FDR's parents, who raised him in the country splendor of their estate in Hyde Park, New York. Jan Pottker takes an intriguing look into the life of Sara Delano Roosevelt, and entwines it with her relationship with FDR's wife, his fifth cousin Eleanor Roosevelt. The book is a feast of anecdotes. Finding them and displaying them appears to be Pottker's greatest strength as a biographer. Everyone's heard the story of how the King and Queen of England came to Hyde Park in 1939 and enjoyed an informal hot-dog lunch. But who knew that 200,000 people lined the road from Poughkeepsie to Hyde Park to greet the royal couple? Or that when the formal dinner for the visiting royalty was delayed an hour, "the roast beef remained pink in the center"?Keeping life, well, rosy appears to have been the leitmotif of Sara's life, and the polar opposite of her daughter-in-law Eleanor's. Much has been written about Eleanor's deep insecurity, having been orphaned young and passed around among relatives, and Pottker covers no new territory here. However, it makes the reader squirm to see Eleanor's dutiful, doubtful personality wither somewhat in the face of Sara's utter self-confidence. Eleanor appears to have spent her thirty-six years of married life abjectly begging Sara's pardon, bickering with her, or silently, sullenly yielding to her mother-in-law's will, which was as formidable as her control over the extended family's pursestrings.In her effort to provide a rounded portrait of Sara, Pottker often provides contrasting anecdotes about her daughter-in-law that almost always cast Eleanor in a bad light. This is unfortunate, as neither woman needs to play the bad guy at this late date. Both Sara and Eleanor were remarkable women, but where the latter learned to find her greatest fulfillment outside the unnourishing bosom of her family, the former started life strengthened by the best that the Victorian era could provide a girl, and only later yielded graciously to satisfying the interest of the world in her role as the President's mother. The contrast between the two women is sufficient without Pottker's effort to cast Eleanor in a lesser light so as to illuminate Sara further. Yes, she did frequently tell her grandchildren, "You are my true children. Eleanor only bore you." But in light of their parents' increasingly separate lives and chaotic schedules, Sara and Hyde Park were the constant touchstones while her grandchildren were growing up.Had Sara not subsidized the family as she did, her son could not have run for president and guided the country thro
Trustpilot
Copyright © 2022 Thriftbooks.com Terms of Use | Privacy Policy | Do Not Sell My Personal Information | Cookie Preferences | Accessibility Statement
ThriftBooks® and the ThriftBooks® logo are registered trademarks of Thrift Books Global, LLC