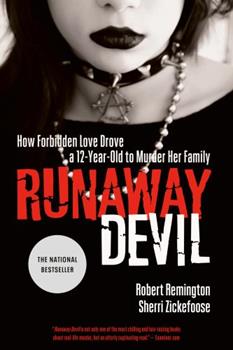 Runaway Devil: How Forbidden Love Drove a 12-Year-Old to Murder Her Family

by Robert Remington and Sherri Zickefoose

Marc and Debra seemed to have it all - a lovely home in the Prairie town of Medicine Hat, fulfilling careers, a supportive marriage, and two beautiful children: eight-year-old Jacob and twelve-year-old JR. After years of struggle to reach this point, they finally felt their future held promise. But on April 23, 2006, their bodies were discovered in their basement, covered in savage stab wounds. Upstairs, Jacob lay dead on his bed, his toys spattered...

Published by Thriftbooks.com User , 12 years ago
This should be a " Must Read" for all parents. The authors brought into the for front the dangers of the "Modern Day" computer era. It will enlighten parents all over the world as to what "Dangers Lurk" in Cyber space. The story was told very well. If you have teenagers. Give the book a read. You won't be wasting you time.

Published by Thriftbooks.com User , 12 years ago
I'm a big fan of the true crime genre, and this is one of the better books out there. I'm still astounded at the so-called punishment this 13 year old Jasmine Richardson received after pressuring her 23 year old lover into killing her parents, and eight year old brother. The book was insightful and disturbing. Jasmine Richardson wasn't abused or treated poorly by her parents, yet she hated them and wanted them dead because she hated their normal parental rules. She even faked a nice family outing with them; riding dirt bikes just a few days before their murder. From the lack of remorse it appears she's a sociopath.

Published by Thriftbooks.com User , 12 years ago
I thought this was a fabulous book. I read it all in a day and couldn't put it down. I can't get over how somebody so young could do such a horrific crime, and not feel any remorse. Its sad that she will get out after such a short period, and have her record expunged. Wonder if she'll head to the Caribbean a la Karla..... This was a well written book and I liked the balance of 'telling a story' and interviews. And the book never chose a side, it showed both sides of the story. I recommend this book to all true crime fans.

Evil little girl gets off lightly in the Cdn. justice system!

Published by Thriftbooks.com User , 12 years ago
Robert Remington & Sherri Zickefoose wrote an amazing book that kept me turning the pages. They explained all the facts of the murders and thankfully didn't (like some author's) repeat it all in the court case. That really annoys me when that happens; it's like they think their readers have a short attention span! JR was truly evil. It may have been because her parents tried too late to discipline her and gave her too much freedom and not enough responsibilities earlier on. Who knows? I believe she had made pre-made plans to kill her family because she was going to do what she wanted and no one was going to stop her. Jeremy was just the idiot to do it, but it could have been anyone else for that matter. Under the Young Offenders Act, JR gets four years. She will be 18 & 1/2 years old and out on the streets again. Keep your eyes on the news in 2012, I don't think we have heard the last of her. Oh sure ... spending $1 million on mental health care is going to change her! Not likely. She really is a "mini-Karla Homolka". Evil, Evil, Evil.
Trustpilot
Copyright © 2022 Thriftbooks.com Terms of Use | Privacy Policy | Do Not Sell My Personal Information | Accessibility Statement
ThriftBooks® and the ThriftBooks® logo are registered trademarks of Thrift Books Global, LLC