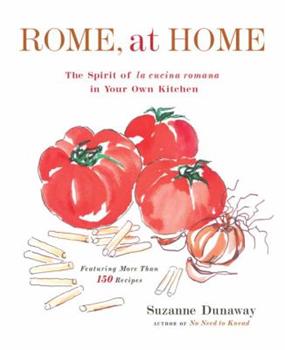 Rome, At Home: The Spirit of La Cucina Romana in Your Own Kitchen

Suzanne Dunaway has been in love with Italy for thirty years, living in Rome off and on and absorbing as much as possible about the cuisine of the Eternal City. Now she has put the basics of la cucina romana into one seductive book. Rome, at Home will enable anyone to savor the irresistible, straightforward flavors of Rome's best ristoranti, trattorie, pizzerie, and home kitchens. Requiring no elaborate techniques, only deep respect for each ingredient,...

In Love with "Rome, at Home"

Published by Thriftbooks.com User , 14 years ago
We have family in Rome, so don't often eat in restaurants, but this book captures the essence of Roman cooking and style. Even if you never make one recipe, the book sings a love-song about the Eternal City. I also gave it as a gift to friends who have spent several months living in Rome--someday, I hope we will be able to spend even more time there. Delicioso!

Published by Thriftbooks.com User , 18 years ago
This is the third "la cucina Romana" cookbook I will have reviewed in the last six (6) months. The first two were `Cooking the Roman Way' by David Downie and `In a Roman Kitchen: Timeless Recipes from the Eternal City' by Jo Bettoja. Both have been published within the last two years. A Roman cookbook certainly seems to be a growth industry.The most important thing to know about this book is that it is more different from the other two titles than these earlier volumes are from one another. `Rome, at Home' by Suzanne Dunaway is a chronicle of the dishes the author cooks in her home in either Rome or Los Angeles. Being only the `Spirit of la cucina Romana' and not the letter of the cuisine, the recipes have a habit of wandering all over the map of Italy. The intent and the content of the two earlier books is to more carefully document Roman dishes as offered by specific restaurante and trattoria in Rome itself.This book includes almost every classic Roman recipe I know, includingCipolline in Agrodolce (Little onions in sweet and sour sauce)Carciofi alla Giudia (Artichokes fried in the Jewish Manner)Spaghetti alla Carbonara (Spaghetti with Pancetta and Eggs)Pizza Bianca (White Pizza)Gnocchi alla Romana (Semolina Dumplings)Trippa alla Romana (Tripe in Tomato Sauce)What is surprising is that the book does not include the very Roman dish `Saltimbocca alla Romana'. In its place are several dishes with origins in other parts of Italy such as Ragu Bolognese, Pizza Napoletana, and Ossobuco in Bianco (Milanese).As this is a book on how the author cooks at home, the recipes follow the well-known Italian culinary practice of buying the very best, freshest ingredients, and doing as little as possible to them to bring them to the table. This is not to say the recipes are overly simple. The author quotes Einstein on this point when he said that the object is to make things as simple as possible, but no simpler. To this end, the author does not skimp on any steps that may surprise conventional wisdom. In a recipe for Caponata (Sweet and Sour Braised Vegetables) for example, she takes the time to salt cut eggplant to draw out some moisture and bitterness. I do sense, however, a few assumptions being made about the cook's knowledge of cooking, as I find no warning against burning the garlic when sautéing, as in the recipe for Spaghetti alla Puttanesca.The book's contents are organized in the same manner as almost every other traditional Italian cookbook with chapters on:AntipastiPrimi, with Minestre, Pasta, and RisottoSecondi, with Pesce (Fish), Pollame (Poultry), Carne (Meat), and Cacciagione (Game)Contorni (Side Dishes)Pane, Focaccia, e Pizza (Bread, Flatbread, and Pizza)Dolci (Sweets)Note that the author's primary vocation is bread baking, so the chapter on breads is not simply filler.The glue which holds the book together is the story of how the author originally fell in love with the city of Rome, how she met her husband in Rome, the tempo of her life when in
Trustpilot
Copyright © 2022 Thriftbooks.com Terms of Use | Privacy Policy | Do Not Sell My Personal Information | Accessibility Statement
ThriftBooks® and the ThriftBooks® logo are registered trademarks of Thrift Books Global, LLC