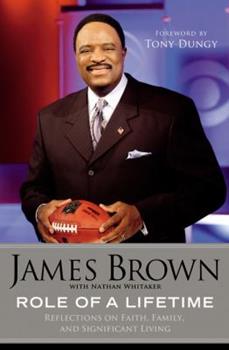 Role of a Lifetime: Reflections on Faith, Family, and Significant Living

Many know Brown as a sports commentator and former athlete. With Role of a Lifetime, he reveals a different side of his character. Part memoir and part self-help, this book draws on James's lessons from his faith and life experiences to guide readers to find fulfillment.

JAMES BROWN ROLE OF A LIFTIME

Published by Thriftbooks.com User , 12 years ago
THIS WAS VERY INTERESTING BOOK AND GAVE AN INSIGHT INTO THE LIFE OF A NOTED TV SPORTS ANNOUNCER.

Published by Thriftbooks.com User , 13 years ago
I enjoy reading memoirs and learning how others have handled difficult events in their lives but still continued to find success. James Brown's life is no different. I have seen him on many occasions on television and at first glance, he seemed to have lived a good life. But as you read his story, you find everyone who looks good may have experienced some pain and strife to get that way. ROLE OF A LIFETIME: Reflections on Faith, Family, and Significant Living is part inspirational and a memoir about the author's life. He shares stories about his ups and down, his failures, problems and successes. The title is true to the content inside of the book. Brown discusses finding the role in your life that God wants you to have. He talks about faith, his family, helping others and being an inspiration. Finally, he does the one thing that many people fail to do and that is to give credit to those who helped you along the way. I enjoyed this book; learning how valuable faith is and reading what God expects out of you. I enjoyed the candid stories Brown shared that allowed us to know that often success does not come easy, but if you use your failures to become better, you can achieve anything with faith and God. I highly recommend this book to those who need inspiration and help in understanding their role in life. Reviewed by RM Jackson of The RAWSISTAZ (tm) Reviewers

Life Founded on Faith in God

Published by Thriftbooks.com User , 13 years ago
Author James Brown wears several hats, and has lived a life that is proof of a foundation rooted in God. A strong familial upbringing and love helped to make him the man he is today. Author Brown shares the ups and downs, accomplishments and disappointments he has experienced in his life in his memoir, Role of a Lifetime. Making it clear that a successful life is not one evident of material gain, but one rooted in God, Author Brown begins the personal account of his life with the disappointment that could have certainly ruined his dreams of achievement when he was cut from the Atlanta Hawks. Gone was a dream to play professional basketball in the NBA, and the embarrassment that was felt having to return to his parents' home. While the dream to play pro ball would not be, Author Brown takes readers through his personal journey of coming to realize God's call to yield his life completely to Him, which would indeed become the foundation for which his faith is based upon when it comes to living the life God requires of him. In his willingness to live for God, it is important to be a blessing to others. What I found very important and helpful is the Ingredients for Successful Living: Good Communication Skills, Appearance, Personal Relations, Punctuality, Thirst for Knowledge, Being a Team Player, and Overcoming Adversity. These are explained with scriptural references that help to further explain these nuggets of wisdom. I enjoyed reading Role of a Lifetime, and found it to be a blessing that should be shared with anyone who feels that an unrealized dream means the end of success in life, but especially to our pre-teen, teen and young adult males who are seeking success in hoop dreams and other professional sports without seeking to find what God has for them. Review by Sharel E. Gordon-Love APOOO BookClub

Published by Thriftbooks.com User , 13 years ago
I'm not a huge football fan, but I've always enjoyed the television demeanor of James Brown. He always seems so kind and well-versed in all that's going on in the studio -- had a certain spirit in him that emanated all the way to me, a wife who never understood the sport and caught his segments while popping popcorn and serving pizza to the real sports fans in our house. How happy I was to pick up this book recently in Lexington, Kentucky -- home of the University of Kentucky, who I learned offered Brown a basketball scholarship. (He "settled" for Harvard instead... a momentary lack of judgment!) Brown is the type of guy who's so athletic (and surrounded by athletes) that he wrote, "I'm only 6'5".... But the true heart of the book is not sports at all. Rather, it's a simplicity that comes from hard work, gratitude, family, and lessons learned. His love for various people in his life (his mom, dad, and a former coach) is palpable. As I read the book, I realized that people don't talk about honor and "keeping your word" like his parents did. it's refreshing to read a book by a man who's "old school" in the ways that matter, who is just as kind to the elevator operator as he is to a Supreme Court Justice. Wonderful read -- buy it for the sports fans in your life... and even the pizza-servers!

Inspirational as well as motivational

Published by Thriftbooks.com User , 13 years ago
I freely admit that I am not a television viewer. While there was a time in my life where I was up on sports and knew everything that was going on with my two favorite NFL teams, that time is not now. And, while I was aware that James Brown was a sports show analyst and commentator, I knew nothing about the man himself. Honestly, I was surprised at how much I enjoyed this book. I thought it would simply be entertaining. I didn't expect to be moved, much less inspired. James Brown writes candidly about his life and his ups and downs and successes and failures. Being drafted into the NBA was his dream come true. Being released after training camp was a defeat. He's honest and open and never once do you think that he's feeling sorry for himself. On the contrary, this is a book about finding the role that you were born to live, and the role that God wants for you. I appreciated James' view that we maximize our own potential as much by building others up and letting them shine, as we do on our own. James speaks openly about finding his faith and living it. His faith and family are important to him and he is who he is, in part, because of his mother's example of goodness. In his eyes, success is making a difference in the lives of others, and we can only do that with God's help. He's very quick to give credit to those people who've made a difference in his life and who've taught him and helped him get to where he is today. If I have any complaints at all with the book, it's that I felt it needed a good edit. But, that's just me. I know a book is good when I want to high-light passages for future reference, and there were several here where I did just that. I'd love to hear James speak in person. I think his message would be both inspirational and motivational.
Trustpilot
Copyright © 2022 Thriftbooks.com Terms of Use | Privacy Policy | Do Not Sell My Personal Information | Cookie Preferences | Accessibility Statement
ThriftBooks® and the ThriftBooks® logo are registered trademarks of Thrift Books Global, LLC