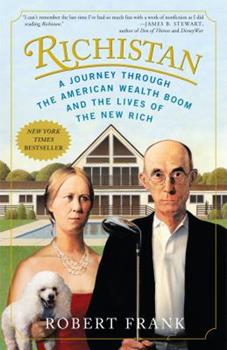 Richistan: A Journey Through the American Wealth Boom and the Lives of the New Rich

THE NEW YORK TIMES BESTSELLER RICH-I-STAN n. 1. a new country located in the heart of America, populated entirely by millionaires, most of whom acquired their wealth during the new Gilded Age of the past twenty years. 2. a country with a population larger than Belgium and Denmark; typical citizens include "spud king" J. R. Simplot; hair stylist Sydell Miller, the new star of Palm Beach; and assorted oddball entrepreneurs. 3. A country that with a...

Lifestyles, Spending, Fears, and Anxiety of the New Rich

Published by Thriftbooks.com User , 15 years ago
If you enjoy intimate looks at private lives, Richistan will entertain you. If you want to learn how to improve your own life, Richistan will only frustrate you . . . by raising your sensitivities to the material things you don't have. The book has many key lessons for the new rich: 1. If you want to be rich today, you'd better be someone who starts a successful business that can be sold for big bucks. Inheriting money is a loser's game. 2. Once you are rich, you'll be left feeling poor . . . because others have so much more. You'll lust for a way to instantly double your money. 3. You won't be able to hire the quality of help you need to get rid of daily frustrations. The help you hire will, however, charge you an arm and a leg and will complicate your life. 4. Unless you work hard to insulate them from your wealth, your children will simply be clueless about how to run their lives in any meaningful way. You, too, could be the parent of a rich parasite with a drinking or drug problem. 5. Unless you cash out, your sense of being wealthy can lead you to spend money that you can't afford to spend. A financial disaster could follow. 6. In the race to prove you count, buying things doesn't work very well. The scale of what's expected is rapidly ratcheting up . . . as are the costs. Many times, more is less in terms of satisfaction. 7. Turn your money toward self-directed philanthropy or changing the political environment, and a few million bucks can have a huge impact. 8. Your spending will reach obscene levels. Does any family really need $80,000 a year in massages? 9. You'll only feel comfortable with people with the same wealth you have. Those with less will see you as a mark. Those with more will put you down and make you feel poor. The book also suggests (but doesn't really develop) the point that there's a split between the very rich and the merely rich, in terms of attitudes and lifestyle. The merely rich are the local professionals who vote Republican (the ones the best selling how to books emphasize) and want to belong at the country club. The really rich are entrepreneurs, and they think the whole system (whatever system it is) stinks. They plan to replace or improve on what the merely rich like (think Donald Trump). The best parts, to me, were those where a person or a married couple were profiled. I was particularly interested in the story of Philip Berber, the Jewish Irishman, who is reshaping third-world philanthropy by nudging aside the NGOs in Ethiopia to let the people help themselves through his personal charity, Glimmer of Hope. His story begins on page 157. The book is a very easy read, and it goes down like a good ice cream soda. Everyone will end up feeling superior to most of the people in the book. What more can you expect from buying and reading a book?

Published by Thriftbooks.com User , 15 years ago
A Federal Reserve Board chart in '03 showed U.S. millionaire households had doubled since '95 to over 8 million. Frank goes on to point out that the richest 1% of Americans were earning about $1.4 trillion, greater than the national incomes of France, Italy, and Canada. Using their wealth, they have built their own health-care system of concierge doctors and travel destinations, etc. - equating to a society within the U.S. Frank sees this new wealth as representing all that is great about the American economy, as well as envisioning the huge gap opened up between them and the rest of us as Middle America's loss. Before the 1980s, most were born into their money and new fortunes were rare because the economy spread its gains. However, in the late 1980s, soaring financial markets brought in new groups of Wall Streeters, corporate raiders, and tech pioneers. Today less than 3% of the rich inherited their wealth, less than 10% are celebrities, and the group is much younger. and made up mostly of professionals. Richistan has at least three classes. 1)Lower: Comprised of about 7.5 million, living in McMansions, driving SUVs, and with net assets of $1-10 million. About 20% of them spent all or more than their income in '04. 2)Middle: About 1.4 million with $10-100 million in net assets. This group has about twice as many entrepreneurs as the Lower group. Upper: Net assets of over $100 million, comprised largely of those who started and sold their own companies, CEOs, and money managers (especially hedge funds). The rising ranks of noveau riche has rekindled demand for "butlers." Today's version, however, is relatively young and inclusive of females. Duties would include accounting for funds (staff, up to 200 vendors), becoming the resident expert on household technical issues (eg. programming lights, alarms). Butler training costs as much as $12,000, with graduates commanding starting salaries of $80-120,000. Half of America's total wealth has been created over the past ten years. Growth in finance, more than any other factor, is allowing people to become richer, faster than ever before. Since '90 the value of all stocks traded in the U.S. has gone from $3 trillion to $17 trillion. Richistanis fall mostly into five categories: 1)Founders - sold their shares through an IPO. (Most of the Forbes 400 list are in this category.) 2)Stakeholders - cash out when their company goes private - UPS, Google. 3)Acquired. 4)Money Movers - Wall Street banks paid $36 billion in bonuses in '06. 5)Salaried Rich: CEO pay is now 170X that of the average worker, up from 40X in the 1970s; over 4,700 managers were paid $2 million or more in '06. One particularly interesting Richistan dimension is "performance philanthropy." Former Senator Bill Bradley and McKinsey consultants released an '03 study showing U.S. charities waste over $100 billion on fund-raising and administration expenses (eg. long reports). Thus, an increasing number of Richista

Published by Thriftbooks.com User , 15 years ago
Greenwich, Connecticut, a town featured in Robert Frank's great new book, "Richistan", is my hometown and a place where I have spent my entire life. As the author points out, Greenwich used to be known as a place of old money but the new money that has flown into town over the past decade or so makes it a spot of even more enormous wealth, capturing all levels of the super-rich as Frank describes. As in many cities in America the new money is most evident in the McMansions that have sprung up. (as some people call it, "Vulgaria") I wonder if every new McMansion has to have Greek-like columns. Frank does a comprehensive job in explaining how the rich live, but it is of note that so many Richistanis, when asked if they have enough money, say "no". If you have $20 million you think you need $40 million. He offers another excellent chapter on how many of the rich aren't any happier with all their money, with many of them being more miserable. But his best point is that the super-rich have created a class unto themselves, and towns like Greenwich, which has a sustainable middle class, will itself, in the future, become even more separated between rich and poor. It's a sobering look. I highly recommend "Richistan".... it's a terrific exposé and an eye-opener as well.

Published by Thriftbooks.com User , 15 years ago
Robert Frank is a reporter at the Wall Street Journal who, a number of years ago, began a column on what it's like to be rich in America. This soon became a very popular and he was tasked to work on it full time. This book represents the synthesis of his experiences over the past few years. "Richistan" is a colloquial term Frank uses to describe the booming numbers of wealthy. Starting in the late 1980s, there has been a doubling or tripling of the number of wealthy households in the US, currently at over 9 million with $1 million or more in net assets. Within this "nation within a nation" there is a class system, with the "lower class" rich (or "merely affluent") in the 1-10 million net worth range, the "middle class" rich in the 10-100 range and the "upper class" rich in the 100-1 billion range. The billionaires, estimated to be about 1000 strong in the US, are in a separate group entirely. Each of these groups have distinct spending patterns and investment goals. 90% of these new rich came from middle or lower class backgrounds and everything about them is different from the stereotypes of the "old" rich: how they made their money, how they spend it, how they give it away. Frank's book is both easy reading and hard to put down. I listened to the audiobook version, going through the 7 hours in "no time". Although educational, this is also a very funny book. The audio greatly enhances the humor as the narrator has perfect timing and change of voice, many times I was laughing out loud, yet at the same time going "ah-ha!". A rare treat.

Your Jaw Will Drop...

Published by Thriftbooks.com User , 15 years ago
The "new rich" have been around for a few years now, but beyond the nonsense to be seen or read about in the tabloid realm, we've never had the opportunity to take a look at what the lives of these people are really like - until now. The people of Richistan did not inherit their wealth, it was earned, sometimes quite quickly, for others it was a steady rise to billionaire status. What this book gives its readers are sharp and humorous obervations on how they made their money and how it has changed their lives, for better and/or worse. For instance, read why it now takes five people to kill a renegade mouse in a big house instead of one... Similarly, the author then takes a look at the different industries and jobs that so much money in the U.S. has spawned. For example, the founder of the Starkey Institute for Household Management (aka: Butler School) wouldn't be where she is today if it weren't for the labor shortage of 20th century butlers. Then there's the need for private chefs, an army of nannies, housekeepers, pilots and executive assistants. And where does a mega-billionaire go on vacation? How does he find a spot that will guarantee his total security and privacy? Richistan will tell you about the man who answered these questions and built a quasi "time share" business for islands instead of condos...plus you'll read about the billionaires who go there and how they spend their vacations. It really is addictive stuff and a great beach book for the Summer. For self-confessed business junkies who enjoy reading about mega-successful business people, and how they got to where they are - this is a must-read, because you get all of that and so much more.
Trustpilot
Copyright © 2022 Thriftbooks.com Terms of Use | Privacy Policy | Do Not Sell or Share My Personal Information | Accessibility Statement
ThriftBooks® and the ThriftBooks® logo are registered trademarks of Thrift Books Global, LLC