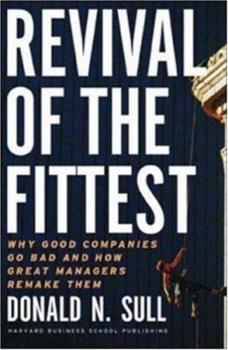 Revival of the Fittest: Why Good Companies Go Bad and How Great Managers Remake Them

This practical guide to solving the innovator's dilemma at an organizational level provides practical tools, a well-grounded model and case studies from several industry sectors, ranging from tyres and beer to financial services and toys.

Published by Thriftbooks.com User , 18 years ago
F. Scott Fitzgerald wrote in 1940 that there are no second acts in American Lives. Professor Sull's witty, crystalline prose in Revival of the Fittest offers a rebuttal. Sull's case-studies of corporate rebounds and managerial reinventions provides a global array of second acts.Contrary to the following review, Sull's wise reflections, his acute hindsight, on what separates mid-course corporate successes from failures is full of insights, though not quick-fixes or one-size-fits-all makeovers.Rather, Sull provides an array of diagnostic tools for managers, helping them isolate the "active inertia"--a term he has coined and that is gaining currency among business theorists--and sift through the vast horizon of possibilities and risks managers in crisis must face.A multi-disciplinary work with a global perspective, Revival of the Fittest is both informative and potentially transforming.

Refreshing look at the rise, fall, rebound of companies

Published by Thriftbooks.com User , 18 years ago
This is an excellent, pragmatic, and thoroughly engaging book on how successful companies can find themselves at risk for failure due to what Sull coins as "active inertia". This concept is illustrated with a great set of corporate examples which are different from the ones used in many other business texts -- and this is a key feature which sets the book apart from its competitors. Sull walks the reader through some very useable steps for how companies can transform themselves and avert obsolescence. A great book, greatly written.

Want to change your company, read this one.

Published by Thriftbooks.com User , 18 years ago
Like many books, Revival of the Fittest suggests that how firms cope with change determines their fate. Don Sull argues that because of the landscape in which firms operate changes, in order to stay competitive, their strategies and commitments should also change. However, managers have a tendency to adhere to what have brought them success. This often results in what Sull terms "active inertia" where managers do more of what worked in the past but irrelevant in a new environment.Unlike other books, Revival of the Fittest is packed with practical advices on how to manage change: from how to choose transforming commitments to what are the considerations for shareholders. This book does not tell readers what to do as the author realizes that there are no one-size-fits-all solutions but rather gives guidance to those who want to make change happen. What is most interesting to me is his method of pairing firms in the same industry who had been affected by the same change and yet one prospered and the other failed. This gives an idea on what constitutes success and failures under different circumstances. The pairs include many firms across the globe in different industries, such as: Goodyear versus Firestone (U.S.A.), Samsung versus Daewoo (Korea) and Lloyds TSB versus National Westminster. (U.K.).This is a book about how to transform an organization and more. In short, what one learns from the book is not only about managerial commitments but also personal ones. The book closes with three simple questions about commitment: (1) what is the right thing to do?, (2) what hinders you? and (3) why wait?.

Revival of the Fittest

Published by Thriftbooks.com User , 18 years ago
I was in the author's class 11 years ago at Harvard Business School when he was getting his degree. The high quality of Don's book Revival of the Fittest is no surprise - his insights were always superior (deep, relevant, and entertaining). No one else came close. Revival of the Fittest is built on persuasive and powerful arguments that become actionable through the mechanisms/exercises he identifies. I'm passing the book to each member of my company's executive team - I've said that it's a must read.I hope that the incumbent set in our industry doesn't read this. Applause for their "active inertia" while the sharp blade of significant innovation gets them in the soft underbelly. So much of the framework was relevant even for early stage organizations like ours - recognizing the active inertia enables us to take greater chances in seeking collaborative arrangements with these potential competitors. Revival of the Fittest and other recent research-based books including Creative Destruction demonstrate that change in industry after industry comes from outside the firm - and significant innovation comes from the margin of the industry. I particularly enjoyed learning how the "success formula" for an organization often mutates into blinders and millstones - early insights and truths become shibboleths. I read business books constantly - this one is a keeper!

Published by Thriftbooks.com User , 19 years ago
This is one of several business books whose subtitle really is accurate: "Why Good Companies Go Bad and How Great Managers Remake Them." The same can be said of a few other business books which are (to varying degrees) relevant to Sull's central thesis. For example, Jim Collins' Built to Last: Successful Habits of Visionary Companies and especially Good to Great: Why Some Companies Make the Leap...and Others Don't. In fact, I wish I had read Sull's book before reading Sydney Finkelstein's Why Smart Executives Fail: And What You Can Learn from Their Mistakes, Michael Craig's The 50 Worst (and Best) Business Deals of All Time, and Robert Sobel's When Giants Stumble: Classic Business Blunders and How to Avoid Them.According to Sull, managers make commitments which fall within three categories: commitments to strategic frames, resources, processes, relationships, and values which define an organization (e.g. Wal-Mart), commitments such as those to budget agreements, job assignments, customer guarantees, and investments which reinforce an organization (e.g. Southwest Airlines), and commitments required by shifts in the competitive marketplace which transform an organization (e.g. IBM).Here's where it gets interesting. After years of rigorous and extensive research, Sull learned that commitments can be "double-edged swords" in that they can provide a sustainable competitive advantage as well as organizational benefits as when a pledge to achieve a given goal backed up with action creates and mobilizes energy among employees and induces them to persevere even when the outcome is uncertain. However, commitments can also limit an organization's flexibility in the present. "By focusing on one way of developing new products, for example, a company may excel at innovation in one domain but become less competent in other technologies." Sull examines dozens of companies in which original (defining) commitments had been reaffirmed (thereby sustained) despite internal as well as external developments which rendered such commitments obsolete and even counter-productive, if not destructive. Both Firestone and Goodyear were caught in what Sull calls "The Active Inertia Trap." Goodyear escaped because its managers made commitments which transformed the organization; Firestone's managers did not. Nor did the managers at other previously great companies such as Digital Equipment organization, Data General, and Wang Laboratories. Although IBM encountered many of the same challenges as did they in its own competitive marketplace, Louis Gerstner and his associates made certain commitments which transformed their company.For various reasons indicated, Sull has made a substantial and unique contribution to our understanding of corporate and managerial failure but also to our understanding of how some managers in some organizations effectively used one of the "sword's" edges to cut through what Jim O'Toole has characterized as "the ideology of comfort and the tyranny of c
Trustpilot
Copyright © 2022 Thriftbooks.com Terms of Use | Privacy Policy | Do Not Sell My Personal Information | Accessibility Statement
ThriftBooks® and the ThriftBooks® logo are registered trademarks of Thrift Books Global, LLC