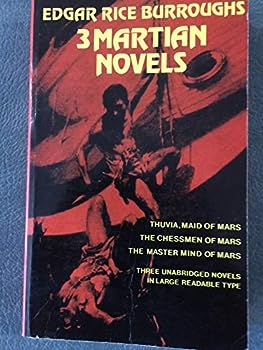 This description may be from another edition of this product. Three of the classic books from the Mars series - Thuvia, Maid of Mars, The Chessmen of Mars & The Master Mind of Mars.

The next generation of ERB heroes for his Barsoom

Published by Thriftbooks.com User , 17 years ago
The first three volume of the Martian series of Edgar Rice Burroughs focused on how John Carter, former cavalier of Virginia, made his way to the planet Barsoom (what we call Mars) and won the hand of Dejah Thoris, princess of Helium after having to repeatedly rescue her from one danger after another. "Three Martian Novels" collects the next trio of ERB pulp fiction adventures in the Barsoom series, which focus on first the son, then the daughter of John Carter and his beloved princess, and then introduces a new visitor from Earth. Carter might be a minor character in these new stories, but each reflects the combination of romance and pulp adventure that worked so well in the first three. "Thuvia, Maid of Mars" focuses on a new hero, Cathoris, son of the Warlord of Mars and his beloved princess. Cathoris is one of two princes and a Jeddak who are seeking the hand of the Thuvia of Ptarth. When she is kidnapped by the sinister Prince Astok of Dusar, the entire planet is about to be thrown into a bloody war and Cathoris has to follow in his father's footstep and deal with savage beasts and phantom armies as he rescues Thuvia and saves Barsoom from a costly war. Of course, by the time he catches up with his beloved, Cathoris finds the situation is slightly more complicated than he thought, mainly because ERB never provides a smooth ending for his couples. In many ways this is like the previous novel, "The Warlord of Mars," where the hero chases his beloved across the landscape of Barsoom and has to deal with green men and white apes. Fortunately, unlike ERB's Tarzan series, "Thuvia, Maid of Mars" is really the only time that repeats himself like this in the Martian series, which stands out as his best as he proves in the next and most inventive volume in the series. "The Chessmen of Mars" is arguably one of ERB's most imaginative stories. This reputation rests on two things. The first is the relationship between the Kaldanes "heads" and the headless Rykors who are the "descendants of exceedingly stupid humanoid creatures bred by the Kaladane over eons for strength, health, beauty and microcephaly." True, this makes no sense from an evolutionary standpoint, but it is one of the more imaginative parasitic relationships in science fiction history. The second is jetan, the Martian version of chess, which is usually played on a 10 x 10 game board of alternating black and orange squares in the cities of Barsoom, but in the city of Manator is played with living pieces in a giant arena. Of course in the living version of the game a moving piece is not guaranteed a square but has to fight for it. The framing device for "The Chessmen of Mars" is told by John Carter on a visit home to Earth to see his nephew. Over a game of chess Carter tells of jetan and the adventures of his daughter, Tara of Helium, in Manator. As was the case with the "Thuvia, Maid of Mars," ERB introduces a new hero for this adventure in Gahan, Jed of Gathol. Dancing at a royal fun
Copyright © 2020 Thriftbooks.com Terms of Use | Privacy Policy | Do Not Sell My Personal Information | Accessibility Statement
ThriftBooks® and the ThriftBooks® logo are registered trademarks of Thrift Books Global, LLC