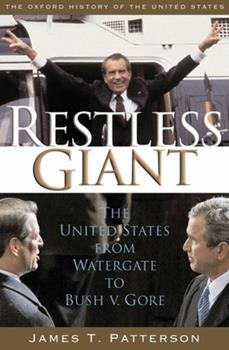 (Book #11 in the Oxford History of the United States Series)

In Restless Giant , acclaimed historical author James Patterson provides a crisp, concise assessment of the twenty-seven years between the resignation of Richard Nixon and the election of George W. Bush in a sweeping narrative that seamlessly weaves together social, cultural, political, economic, and international developments. We meet the era's many memorable figures and explore the "culture wars" between liberals and conservatives that appeared...

Balanced view of the period

Published by Thriftbooks.com User , 13 years ago
What I liked best about the book was sense of balance. It discussed good things and bad things about both Reagan & Clinton, the two most controversial presidents of the period. It was also a period of enormous social change, much more so than the sixties. Patterson could have made the point that the 70's were the time when the social experiments of the sixties came to fruition.

Published by Thriftbooks.com User , 14 years ago
I read this book for a graduate class in American history. James T. Patterson's book is a historical overview of American history, which starts with one constitutional crisis and one of America's darkest hours politically, the resignation of President Richard Nixon, and ends with another test of America's constitution, the Supreme Court case Bush v. Gore, which settled the presidential election of 2000. The intervening years between these two tests to America's constitution are "a tale of national resilience and even regeneration" (xii). Patterson's book is extremely prescient at describing the socio-economic changes that took place during the period. For the political angle, Patterson does an outstanding job of providing information about new political movements that rose to power in America; however, his information on the presidential administrations during the period is scant. His lack of real in-depth analysis of the presidential administrations has much to do with the fact that most archival information has not been made available to scholars for study and comment. Patterson's book reads like a high school history textbook. Thus, Patterson's book must be looked upon as a good historical overview of the period and if one wants a more detailed history then one will need to examine other books that give a more in-depth analysis on particular events of the period. Patterson's description, in the beginning of his book, of the changing political and cultural institutions of the 1970's is very informative and his analysis agrees with other historians such as Bruce Schulman. Every institution and its leadership was mistrusted and looked upon with great derision by many Americans. Patterson observed that this mistrust stemmed "from the media, whose leaders had become considerably more skeptical and confrontational as a result of the travails of Vietnam and Watergate, and which questioned if any authorities could be trusted" (10-11). In addition, many Americans were uncomfortable by the violence and degradation of cultural values that took place during the tumultuous times of the 1960's. By the early 1970's, violent protests in America had declined. However, culturally, Americans witnessed the rise of sexual promiscuity in society. Movie and television situation comedies were replete with sexually promiscuous themes and innuendos. In 1973, the Supreme Court decision in Roe v. Wade made abortions legal throughout the nation. Patterson astutely showed out-of-wedlock pregnancy statistics were looked upon as a barometer by many in society to prove that cultural mores were grossly out of control. "The statistics by race were shocking: In 1970, 38 percent of black babies were illegitimate, compared to 6 percent for whites. By 1990, 67 percent of black babies were illegitimate, as opposed to 17 percent for whites" (48-49). Finally, the American economy was in decline, and neither the Ford nor Carter administrations economic remedies w

Great finish to a wonderful series

Published by Thriftbooks.com User , 15 years ago
Patterson delivers another smash hit in his book on the United States from Watergate to Bush v. Gore. This book is a less historiography study and more of a statistical approach than other oxford books but it is nonetheless expertly presented. The analysis is top quality and the sense of how the United States became restless (especially during the 1990's is apparent. Patterson makes a good argument that we have to wait and see what effect 9/11 will have and whether or not it was the changing milestone. If you are interested in this time period this is a must read. For those who are interested in American studies this is an essential book for your library.

Oxford History of the U.S. with yet another winner!

Published by Thriftbooks.com User , 16 years ago
James T. Patterson's "Restless Giant", Volume 11 (and last chronologically) in the Oxford History of the United States puts an exclamation point on this gem of a series. Professor Patterson follows up on his own penultiate volume in the series, "Grand Expectations", with aplomb. David M. Kennedy, now the editor of the series, succeeding the late C. Vann Woodward, and himself the author of the antepenultimate volume, "Freedom from Fear", perhaps sums up the rationale for studying such recent history in his forward to this book: "It is often said that the history we know the least well is the history of our own time, particularly the decades immediately surrounding our own birth. Here (the readers) will find a cogent and compelling account of how history shaped the world they inherited . . . ". Patterson does again what he does best and that is put history in the context of a multitude of definitionally overlapping diciplines. Covering the time period of 1974-2000, without the context of a Revolutionary War (as did Robert Middlekauff in "Glorious Cause"), the Civil War (James McPherson in "Battle Cry of Freedom"), and the Great Depression and WWII (Kennedy's Freedom from Fear) - all part of this series, is exceedingly well done and presented in a fashion that most historical narrative writers would find difficult to create. It is, hence, no surprise that Patterson was chosen to write two volumes here, both recent 20th Century history, without a linchpin on which to write around. He covers the period extraordinarily well and gives the reader a very balanced view of the many facets of our history over the last thirty years. With this book only the 5th actually published in the series, I was quite happy to learn the following. Gordon S. Wood (Brown University) will be writing on the early National era. Daniel Howe (UCLA) will be writing on the Jacksonian era. H.W. Brands (University of Texas) will be writing on the late 19th Century. Bruce Schulman (Boston University) will be writing on the Progressive era. One or two volumes (two would make the series the full eleven volumes originally envisioned) on the Colonial period apparently have yet to be assigned. While the topical volume on economic history has been scrapped, George Herring (University of Kentucky) is writing one on foreign relations and policy. These are expected out in the 2006-2007 time frame. The entire series is a wonderful undertaking that has not received the joint acclaim it deserves. Certainly many awards have been won individually for these terrific works but I think the awareness of the series, as a whole, is much lower than is warranted by the scholarly work being put into it. I am hopeful that as more volumes are published, this quickly dissipates. Kudos to all involved in this very worthy project. It appears as if readers are in for a treat over the next 12- 24 months with the "missing" volumes at least having manuscripts into David Kennedy (Freedom fr

Well Done History of Our Time

Published by Thriftbooks.com User , 16 years ago
It is only when the history books are written that we begin to find out what really happened as opposed to reading/watching the day to day news stories in the paper/television. This book by James Patterson, part of the Oxford history of the United States covers the years from Nixon's resignation (1974) to inauguration day 2001 when George W. Bush became President. The media tends to stress conflict. In actuality there is much less conflict than you might otherwise believe. The majority of Americans were less partisan, less attentive to political fighting than were the protestors, the politicians or the interest groups with causes to defend. Through this quarter century, the Americans tended to elect the presidential candidate that they considered to be the most central, neither left nor right wing. Both political parties continued to be effective, holding about half of both houses of congress. The rights of racial and ethnic minorities, Catholics and Jews, the handicapped, senior citizens, women and gays all expanded. The economy expanded to have more Americans working than ever before. This supurb book takes the immediacy out of the headlines and presents the history of our time in a well thought out, clear, and concise manner.
Trustpilot
Copyright © 2022 Thriftbooks.com Terms of Use | Privacy Policy | Do Not Sell My Personal Information | Accessibility Statement
ThriftBooks® and the ThriftBooks® logo are registered trademarks of Thrift Books Global, LLC