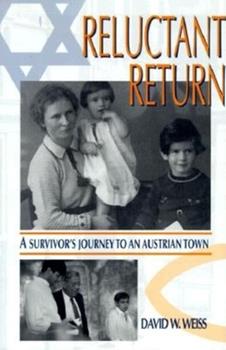 Reluctant Return: A Survivor's Journey to an Austrian Town

"This beautifully written memoir, which shifts smoothly from past to present as it blends memory and contemporary experience, is a story that will resonate with any sensitive Jew. [The book] intrigues and challenges, transcends the personal and becomes a universal statement." --Hadassah Magazine "In an astonishing and moving document, Weiss... describes his 1995 return trip to the Austrian hometown from which, as a boy, he fled Nazi persecution in...

A Rich and Moving Memoir of the Struggle for Forgiveness

Published by Thriftbooks.com User , 22 years ago
"Reluctant Return" by David Weiss presents the intricate emotional landscape of a Holocaust survivor compelled by the sincerity and heart of a new Christian sect to return to his Austrian hometown of Wiener Neustadt on a mission of reconciliation. Ichthyus, a new Christian sect devoted to repairing the deep wounds caused by Christian anti-Judaism and anti-semitism, begins from the dreams and visions of a minister's wife, Uli Eiwen, who feels led by God to uncover the truth of 1000 years of Jew-hatred in her hometown, and to work to forge a reconciliation. Uli's visionary experiences lead her to the belief that God has abandoned Christianity because of two thousand years of Christian anti-Judaism. Recognizing her God as the God of the Jews, she feels that God's covenant with Abraham speaks directly about Christians in particular in the statement, "your enemies shall be my enemies." She convinces her husband, Helmuth, of the power of her beliefs after a chilling vision of the Nazi swastika during a mass he leads drives her from church screaming. He discovers the horrible history of Lutheran complicity with the SS in his hometown, resigns his ministry, and starts Ichthyus. Weiss and other Jews from Wiener Neustadt are convinced to return by the simplicity and honesty of the Eiwens, much to their own surprise. Weiss's mapping of the intricate and complex emotions he feels during his return has much to say about the destructiveness of prejudice and hatred, and the difficulty and beauty of forgiveness. Weiss writes with a pained lyricism in this profoundly moving book. I have used this recently in a course on religious autobiography (college level), and it has been a powerful source of knowledge and reflection for my students. Very highly recommended.

Published by Thriftbooks.com User , 23 years ago
This is an astonishing work -- deeply revealing, personal, and yet universal in its message. David Weiss uses language with precision, describing complex emotions and internal conflicts with grace and originality. This book, regardless of our associations to the Holocaust, is one that we can all learn from. It reminds us that each human being must be judged as an individual, even when circumstances make it difficult for us to do so. For those of us who search within to overcome old biases and hatred, this book can be an epiphany. For any thoughtful person, it can illuminate a black period in history and inform our responses to it.

A most powerful book!

Published by Thriftbooks.com User , 23 years ago
David Weiss opened his heart and soul with "Reluctant Return" and I was drawn into his life and experience so deeply that I finished the book in one sitting (with a dinner break). We all have our ghosts and parts of our past we have buried or refuse to acknowledge and we live our lives fully, successfully and quite happily. David Weiss lived like that until he was forced to take another look at his feelings about Austrians and growing up in antisemitic Austria. He shares his own survival experiences during the 1930-45 period and his feelings about pre- and postwar Germany, Germans, Austria and Austrians. He points out that Germany and many German people have openly acknowledged their role in the holocaust whereas Austria and the Austrian people are barely beginning this process. He describes his experiences and deepest feelings when he is returned to the town of his youth. Then how he shared his life and these feelings with groups of Austrian school children whose history books have deliberately omitted their country's role in the holocaust. The children start to realize and accept that their elders committed terrible crimes against other humans whose only error was to try to live peacefully in this small town in Austria.If this book were published by a BIG NAME publisher, it would be an instant best seller. I believe that "Reluctant Return" will take a path similar to "Under the Tuscan Sun" and "The Perfect Storm" and grow to be a classic.

Published by Thriftbooks.com User , 23 years ago
David Weiss has written a profound memoir of a difficult encounter with people and his past. It is eloquent, brilliant, deeply moving and eminently readable.

Outstanding book about the Jewish experience in Nazi Austria

Published by Thriftbooks.com User , 23 years ago
This is the sad story of the Jewish community in wartime Nazi Austria and the return of surviving victims to Wiener Neustadt. A gripping tale told by the son of the former chief Rabbi of the town.
Trustpilot
Copyright © 2022 Thriftbooks.com Terms of Use | Privacy Policy | Do Not Sell or Share My Personal Information | Accessibility Statement
ThriftBooks® and the ThriftBooks® logo are registered trademarks of Thrift Books Global, LLC