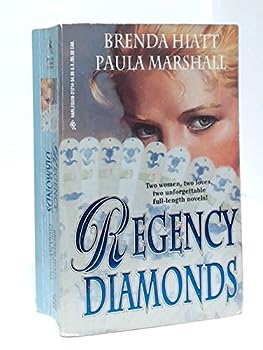 by Paula Marshall and Brenda Hiatt

'The Cyprian's Sister' is excellent

Published by Thriftbooks.com User , 20 years ago
You can pick up any of Paula Marshall's book and find it delightful and enjoyable and I am surprised to find that not many people have reviewed ( read? ) her books. I have only read The Cyprian's Sister in this anthology and would like to recommend it to other readers. The hero , Lord Francis Carey, mistook Miss Bel Passmore , a virtuous vicar's daughter, to be her sister who made her fortune as a Cyprian and out of blackmailing rich protectors. When Bel was sorting out her sister's belongings after her death, Lord Carey barged into her home rudely accusing her of blackmailing his nephew and demanding back the scandulous letters. Deciding to teach him a lesson, Bel played along with him with a bargain and then promptly disappeared. Two years later, they met at his sister's party and Carey decided to carried out his avowed revenge. The sparring , repartee and innuendos are witty and humorous and the sexual tension strong. The passion and emotions became so intense towards the end that they are compelling. I found I could not put the book down.

Two Regency Romances in one book from Harlequin

Published by Thriftbooks.com User , 22 years ago
Harlequin seem to be connected with Mills & Boon an English publisher. Mills & Boon publish a number of their better selling authors in hardcover large print as well as paperback.Many Harlequin Regency romances are of excellent quality although Harlequin no longer publish a separate Regency line. The gem in these two stories is the Paula Marshall story "The Cyprian's Sister" Miss Bel Passmore inherits her sister's house and goods, Lord Francis Carey arrives, and mistakes her for her sister who was threatening to blackmail his nephew. By its self I'd rate this one 5 stars.The other story Azeala by Brenda Hiatt is partially set in Williamsburg and partially in London. Features an American heroine and an English hero. When I lived in London I noticed that many Americans are fascinated by street markets, and they turn up in this tale. By itself I'd rate this one 4 stars.I purchased my copy in January 1999, so the publisher may have a small stock left.
Copyright © 2020 Thriftbooks.com Terms of Use | Privacy Policy | Do Not Sell My Personal Information | Accessibility Statement
ThriftBooks® and the ThriftBooks® logo are registered trademarks of Thrift Books Global, LLC