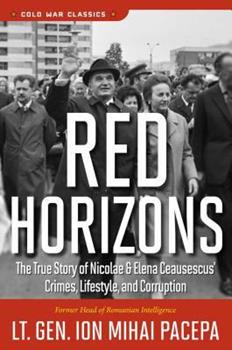 A former chief of Romania's foreign intelligence service reveals the extraordinary corruption of the Nicolae Ceausescu government of Romania, its brutal machinery of oppression, and its Machiavellian relationship with the West. An in side story of how Communist Party leaders really live.

Published by Thriftbooks.com User , 16 years ago
Red Horizons: Chronicles of a Communist Spy Chief is a fascinating book. Pacepa has insights that you will fine nowhere else. One very interesting piece is where Pacepa relates a conversation in 1978 with Constantin Munteaunu, a general assigned to teach Arafat and the PLO techniques to deceive the West into granting the organization recognition. From this book, one finds out that Arafat was indeed a homosexual. He cause of death was likely AIDS. Here is an excerpt: "I just called the microphone monitoring center to ask about the 'Fedayee,'" Arafat's code name, explained Munteaunu. "After the meeting with the Comrade, he went directly to the guest house and had dinner. At this very moment, the 'Fedayee' is in his bedroom making love to his bodyguard. The one I knew was his latest lover. He's playing tiger again. The officer monitoring his microphones connected me live with the bedroom, and the squawling almost broke my eardrums. Arafat was roaring like a tiger, and his lover yelping like a hyena." Munteaunu continued: "I've never before seen so much cleverness, blood and filth all together in one man." Munteaunu, wrote Pacepa, spent months pulling together secret reports from Egyptian, Jordanian and Syrian intelligence agencies as well as Romanian files. "I used to think I knew just about everything there was to know about Rahman al-Qudwa," Arafat's real name, "about the construction engineer who made a fortune in Kuwait, about the passionate collector of racing cars, about Abu Amman," Arafat's nom de guerre, "and about my friend Yasser, with all his hysterics," explained Munteaunu, handing Pacepa his final report on the PLO leader. "But I've got to admit that I didn't really know anything about him." Pacepa wrote: "The report was indeed an incredible account of fanaticism, of devotion to his cause, of tangled oriental political maneuvers, of lies, of embezzled PLO funds deposited in Swiss banks, and of homosexual relationships, beginning with his teacher when he was a teen-ager and ending with his current bodyguards. After reading the report, I felt a compulsion to take a shower whenever I had been kissed by Arafat, or even just shaken his hand." "If true, Arafat would have a great deal to conceal from his people and his murderously anti-homosexual supporters in the Islamic world," writes Frum, suggesting that Arafat was airlifted to France for medical treatment because he "could trust the French to protect his intimate secret.

How come someone say it's not true?

Published by Thriftbooks.com User , 21 years ago
... I lived this nightmare for 31 years! That was the reason for my defection to the US.And now to the book... I read it twice, devouring it page by page until the wee hours of the mornings. It transported me back to the times when terror and oppression ruled this beautiful country of Romania. I encountered the steel arm of the Securitate a few times as well. The book is not a fiction but rather a document left for our future generations to ponder upon. Wonderful yet scary, funny and serious, a complete description of Romania's corrupt system. Not to be missed!

Published by Thriftbooks.com User , 22 years ago
The author was a spy boss in Communist Romania. He saw the Ceausescus on a daily basis, and relates all their shocking--but true--dirt. From their dealings with drug lords to their rapist son's wild partying. Aside from its historical value, the book provide insight into the workings of foreign/Communist intelligence operations.
Copyright © 2020 Thriftbooks.com Terms of Use | Privacy Policy | Do Not Sell My Personal Information | Accessibility Statement
ThriftBooks® and the ThriftBooks® logo are registered trademarks of Thrift Books Global, LLC