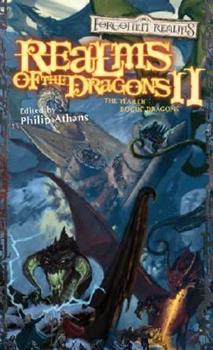 Realms of the Dragons II: The Year of Rogue Dragons (Forgotten Realms Anthology)

An all-new anthology showcasing dragons of the FORGOTTEN REALMS world and featuring new authors. This anthology features a range of stories by authors new to theForgotten Realmssetting writing about dragons. It fleshes out many details from Richard Lee Byers's Year of Rogue Dragons trilogy and features art work by award winning artist Matt Stawicki.

Published by Thriftbooks.com User , 15 years ago
I'll try and review each story in short. 1. Faerie Ire by Erin Tettensor. A cute story rich in humor and with some very witty writing. Some may consider it childish, but that was author's intention. Entertaining. **** 2. The Woman Who Drew Dragons by Rosemary Jones. A very nice idea, but a bit drawn out. Could have been shorter. *** 3. The Hunting Game by Eric Scott De Bie. One of two stories I was looking forward to. De Bie shows all of his storytelling talent in this story, but I got the feeling he wanted to tell too much in 30 pages. Had the substance for a whole novel, really. Imaginative, but hasted. *** 4. The Road Home by Harley Stroh. A very good short story, with all the elements a short story should have. Very interesting characters. **** 5. How Burlmarr Saved the Unseen Protector by Kameron Franklin. The second one I was looking forward for. I just loved "Maiden of Pain". The story features one of Realms' iconic dragons. Again, we have an interesting idea and good writing, but very hasted realization. Could have used additional 20 pages. *** 6. A Tall Tale by J.L. Collins. Naïve and pretty boring. Probably the worst of the lot. * 7. The Book Dragon by Jim Pitrat. Concise and vivid. Interesting characters, although not so dragon-oriented as the rest of the stories. **** 8. Freedom's Promise by Ed Gentry. The crown story of the book. Magical, philosophical, tragic. Simply great. ***** 9. Possessions by James P. Davis. Another great story. Bloody and mystical, with one totally unpredictable twist. ***** 10. Queen of the Mountain by Jaleigh Johnson. A story of human determination. As some other stories in the book, could have used a couple more pages to flesh it out. *** 11. The Strength of the Jester, by Murray J.D. Leeder. Nothing special, although it has a nice, philosophical note to it. The only story directly dealing with the Rage. Too much combat, though. *** All in all, this is a selection of average short stories, with two shining exceptions, and very few bad stories. I will give it four stars, although I must warn you that you will actually get only 240 pages of stories. The rest are excerpts from other books, used only to pump up the page count. They really could have included another story or two. A classic WotC robbery.

Published by Thriftbooks.com User , 16 years ago
The first Realms of the Dargons was awesome. This one was not so awesome. The new authors still have to capture the main ideas of the dragons. Over all an enjoyable book. I liked the first story about the faire-drake.

More original than most

Published by Thriftbooks.com User , 16 years ago
I thought this anthology had way more original stories than most of the others in the past. Not all of them were great, but that is an anthology for you and a few stand out. The dragons were quite different than I expected and some of the stories used them as the main character. Plus I laughed out loud a few times in the funnier stories especially near the beginning.

Published by Thriftbooks.com User , 16 years ago
Although the stories are enjoyable in themselves and a good summer afternoon read, I appreciated this anthology most because it gave me good hints of the writing styles of several new Forgotten Realms authors. I dislike buying books based on the cover art and/or back cover blurb, so it is helpful to read reasonable samples (in the form of short stories) of authors previously unknown to me. I now know whose future novels to look for (and in a couple instances who to avoid).
Trustpilot
Copyright © 2022 Thriftbooks.com Terms of Use | Privacy Policy | Do Not Sell My Personal Information | Accessibility Statement
ThriftBooks® and the ThriftBooks® logo are registered trademarks of Thrift Books Global, LLC