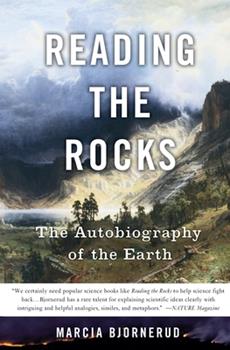 Reading the Rocks: The Autobiography of the Earth

To many of us, the Earth's crust is a relic of ancient, unknowable history. But to a geologist, stones are richly illustrated narratives, telling gothic tales of cataclysm and reincarnation. For more than four billion years, in beach sand, granite, and garnet schists, the planet has kept a rich and idiosyncratic journal of its past. Fulbright Scholar Marcia Bjornerud takes the reader along on an eye-opening tour of Deep Time, explaining in elegant...

In the Author's Words

Published by Thriftbooks.com User , 17 years ago
Weighing in at 197 pages this is not a long book. Still, it could be hard for a civilian to wade through that many pages of rock-talk. Nonetheless, Bjornerud's humor combined with her impressive command of the English language and metaphoric use of cultural references (from literary canon through contemporary pop) result in a refreshingly fun way to learn geology. In fact, the pages fly by; I found myself (with no background in geology) devouring the book more quickly than expected and was disappointed to reach the last page and have to put it down. (I loaned it to an acquaintance thinking she might like it. She finished it in one weekend!) Getting right to the point, I highly recommend this book. And rather than bore you with my attempt to play the critic, allow me instead to quote a few favorite passages to illustrate my point...in the author's words: "Predation is, of course, a brilliant strategy for survival; rather than having to gather diffuse nourishment directly from seawater (the ultimate slow food), one can quickly ingest large bites of high-quality protein that has been conveniently preprocessed by other organisms. Predation is neither good nor bad in any absolute sense, but once introduced, it utterly changes the rules of an ecosystem. Carnivores can eat (but otherwise ignore) vegetarians, but vegetarians can neither eat nor ignore carnivores." "Species that survived for long intervals of time with little change - the most successful from an evolutionary standpoint - do not make good index fossils. Instead, the Edsels and eight-track tapes of the fossil record are the most useful, because they are diagnostic of well-defined geologic moments." Describing the periodic table of the elements: "The snooty noble gases, in the far right column, have perfectly filled electron shells and refuse to interact with other lesser forms of matter." "Unlike normal earthly anorthite...the anorthite in the Allende chondrite also contained measurable amounts of magnesium. To a mineralogist, this is like finding an uninvited and ill-dressed guest at a gala dinner. Normally, anorthite eschews magnesium..." "[The periodic table of the elements] fails to inspire the awe its human users should feel at knowing that every atom of hydrogen, oxygen, and carbon in our bodies is simply on short-term loan from the cosmic library; was previously issued to remote stars, rogue comets, and rocky cliffs; and will soon be returned for further circulation."

Reading the Mind of a Geologist

Published by Thriftbooks.com User , 17 years ago
It's not easy thinking like a geologist. By that I do not mean that it is necessarily difficult to learn to think like a geologist - I did it! - but that the consequences of geologic thinking are many and varied. Your mind is trained to fathom everything from the smallest fraction of a second to the longest times imaginable and this gives you a very different perspective on things than the average person. [It's hard to get into discussions with the neighbors about earthquakes, hurricanes, or, most recently here in southern California, landslides without sounding callous and overly excited at the same time.] To a geologist, a small pebble contains a long history. Marcia Bjornerud, geologist and eloquent expositor of the earth sciences, has given non-geologists and geologists alike a gift with her wonderful book Reading The Rocks. The subtitle of the book - The Autobiography of the Earth - seems to me to be slightly misleading. Yes, if you read the entire book, you'll have a general overview of earth history [although since not presented in chronological order, you'll have to mentally assemble the bits yourself]. The main title really tells the tale - Professor Bjornerud takes us into the mind of a geologist and shows us how they think. Reading the book took me back to those heady days of college and graduate school as countless lectures and field trips began to take and I began to get it. I remember the day that I was staring at a layer of limestone in the then unfinished freeway bypass around State College, Pennsylvania and was fixated on a thin layer of sand grains that ran through the fairly thick layer of limestone. The overall layer represented hundreds, thousands, or maybe even millions of years of sediment deposition, but that 1 or 2 grain thick sand layer represented a season or maybe even a storm. [WOW, DUDE!]. She pulls no punches on the vocabulary, but a glossary at the end of the book will help the reader unfamiliar with the language of geology. If you like reading books about science and you have limited time to do it, I recommend that Reading the Rocks by Marcia Bjornerud move to the top of your pile!

A Science Book for Everyone

Published by Thriftbooks.com User , 17 years ago
This is the most readable science book I have ever picked up. Actually, in the preface, I thought the style was too light, but in the text Marcia Bjornerud explains geology with a perfect balance between technical and non-technical. It is more than a readable geology text. As a history of geology, it gives much needed perspective on current issues like global warming and creationism vs darwinism. I came away with a sense of awe for both the earth and Marcia Bjornerud, but then again it is an autobiography.

The Rocks Tell an Epic Story

Published by Thriftbooks.com User , 17 years ago
I enjoyed reading Marcia Bjornerud's wonderfully written book, "Reading the Rocks: The Autobiography of The Earth." In fact I read it twice. As an amateur naturalist I found her explanations vivid and easy to understand. (Geology terms are highlighted in bold print and are defined in an extensive glossary) Dr. Bjornerud's narrative is lively; her analogies are lucid and in many passages down-right amusing. I forgot at times that I was reading a book on science. The text rolls along like an absorbing story of an elderly person you have lived with every day of your life, but have never really gotten to know. There are epic tales of conflict, adaptation, rebirth and a couple of near-death experiences. It's all there, if you know which rocks to read. More than once I was reminded of something George Carlin once said. He was on a rant about meaningless phrases like, "Save the Earth." Granted, scientists (Dr. Bjornerud included) are correct in warning us about the damages done to the environment since the Industrial Revolution. But the cry of "Save the Earth" misses the point. Earth will do just fine, it's LIFE that needs to be saved. The author makes that point by carefully explaining the inter-relationship of the lithosphere, the biosphere and the atmosphere. It's all connected, and we are the children teasing the domino of life at the end of the line. This is an important book, not only for amateurs like me but for professionals as well. I recently ordered "Reading the Rocks" as gifts for three paleontologist friends of mine, Jack Horner, of the Museum of the Rockies, Jim Martin of the South Dakota School of Mines, and Dave Parris of the New Jersey State Museum.

Reading the Rocks: A Lovely Ride Through Earth's History

Published by Thriftbooks.com User , 17 years ago
Reading the Rocks ties the earth's history to present-day issues affecting our home and the people and other plants and animals who inhabit the earth. Dr. Bjornerud engaged me with her beautiful prose and funny anecdotes, as well as her ability to tie together the big picture with the small. I appreciated having the earth's timeline at the front of the book, and found that new terminology was carefully explained and explored. I recommend this book to anyone interested in understanding the origins of our planet.
Trustpilot
Copyright © 2022 Thriftbooks.com Terms of Use | Privacy Policy | Do Not Sell or Share My Personal Information | Accessibility Statement
ThriftBooks® and the ThriftBooks® logo are registered trademarks of Thrift Books Global, LLC