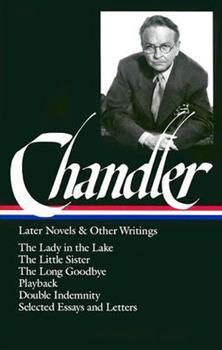 Raymond Chandler: Later Novels and Other Writings (Loa #80): The Lady in the Lake / The Little Sister / The Long Goodbye / Playback / Double Indemnity

With humor, along with an unerring sense of dialogue and the telling details of dress and behavior, Raymond Chandler created a distinctive fictional universe out of the dark side of sunlit Los Angeles. In the process, he transformed both crime writing and the American language. Written during the war, The Lady in the Lake (1943) takes Philip Marlowe out of the seamy L.A. streets to the deceptive tranquility of the surrounding mountains, as the search...

Sidewalk by the Sea

Published by Thriftbooks.com User , 12 years ago
I started reading the older novels for a baseline comparison with what I read today. It's also more fun to review a book that doesn't already have hundreds of other reviews - simply in order to avoid repeating. I have a variety of interests but detective novels (well written) have always appealed to me because so much human nature was involved. Even what was supposed to be "Fiction" likely turns up as "Truth in Exercise" somewhere along the line - crime and ingenuity are constant companions and the best of the novelists turn that to distinct advantage when striving to entertain us with their own concept of it. Take Raymond Chandler. Even though he is out of the past, Mr. Chandler is a "must read" if you enjoy detective tales, written, detailed, enhanced to the 9th degree with excellent exchange of dialogue that never misses a beat or a connection to his plot. He "sculpts" his story - not only of the face of the detective, but of the out-of-the ordinary characters that detective, Phillip Marlowe, meets along the way as well. Marlowe himself is a tarnished hero, but his Chandler-Given basic instinct in his own integrity give us hope as we read; there are a few left to be counted on even through the human frailties. He even throws in a casually undertaken, but carefully worded sex scene or two now and again for heat. A sign of his times emerge in the way the the sex scenes are delivered, but they are quite effective in their undertaking, nonetheless. Maybe that will continue to be "part of the charm" of the older books; their "stern and structured" editors served to make them clever rather than graphic in their technique. (Perhaps I should hasten to add that I don't see anything wrong with literary license of today's more graphic scenes, either. A good book is a good book in any era). They are all excellent but in the interests of length, I am focusing on "Play Back" in this review solely because one unexpected scenario really captured my imagination. In "Play Back", a sudden, unexpected burst of independent thought occurs in an exclusive hotel lobby with an old man - a character on the side - who somehow comes front and center even though he has not played much of a part in the whole up to that point - who was one of the "chosen few", born wealthy, built to stay that way, and had nothing more to do but keenly observe the foibles of the others around him, of which he became extraordinarly fine-tuned. It is finesse - the element that sets certain writers apart from the others - and which I have noticed present throughout the books by Chandler I have read; is a remarkable set of ideas the old man in the lobby bounces off the taciturn Marlowe, who is more interested in the immediate whereabouts of an individual he is purusing than in the interesting conversation of a man past his own time. The story starts, of course, with the detective, Marlowe, being hired through an attorney, which gives him "privilege" to operate through many

Outstanding in so many ways

Published by Thriftbooks.com User , 14 years ago
First, let me say that there's a separate volume of Chandler's early novels. As much as I liked this volume, I actually enjoyed the earlier novels just a little bit more and suggest starting there. I started reading one story and wound up going through all of them in both volumes in the space of a few months. I also wound up reading and enjoying all the Dashiell Hammett stories, but I give Chandler a slight edge. I won't try to list all the ways these novels are great and entertaining, but here's one thought that hasn't been mentioned in other reviews. Chandler is excellent at presenting a hero-character who has to worry about money and making a living. Indeed, Chandler makes this issue integral to the character's persona and to the plot line. Yes, the books are escapist in so many ways. Yet, in this respect at least, they are far more realistic than almost all of the fiction, and much of the non-fiction, these days.

Published by Thriftbooks.com User , 15 years ago
C-L-A-S-S-I=C HIGH/low notes. These stories are like a deck cards, all aces...... but there are way too few left. I finished "Little Sisters" (GREAT), "Farewell, My Lovely"- is recommended in the other half (earlier edition). The hook is Marlow. In times where many take the easy/cheap way out, I ride hard with Marlow. Marlow does it with style, humor, wit, grit, and nothing less than an all american: get the job done. But in a way that is the opposite his nemesis: the monopolies of power & money. Of course they admire and hate him. But it just doesn't get any better than Chandler. Need an excuse? Then read it for the wrting alone. The best!

Priceless Solely for The Simple Art of Murder

Published by Thriftbooks.com User , 16 years ago
While Hammett may very well have carried the modern hard-boiled mystery forward into the light, Chandler defined it. Of the two, I think I prefer Chandler most. Chandler better than anyone else set the standard for the genre, and laid down the rules to which all the great mystery writers of today rigorously adhere. Here, in brief, is the mystery writer's credo: 'But down these mean streets must a man go who himself is neither tarnished nor afraid.' As Chandler remarked in his classic essay, The Simple Art of Murder, Hammett rightly deserves the title of Founder of the modern mystery because he succeeded in giving murder back to the kind of people who commit it. So what kind of person goes up against the kind of people who committ murder? Chandler responds with Exhibit A: Philip Marlowe. Chandler's Marlowe resonates in my favorite mystery romps, the Spenser series, and the archetype also finds its way into more than a few 'Good Cop' dramas. I enjoy the escapades of Philip Marlowe simply because the wry cynicism, coupled with the tough moral fibre to get to the bottom of any affair and see justice (or at least some sort of closure) served, makes for truly fascinating escapist reading. Each of the books in this collection, as in the collection preceding it, amply deliver on this score. If you happen to acquire this masterpiece, never let it go. These are classic books, and will never become dated. I personally prefer The Long Goodbye to The Big Sleep, and found the former a longer and more satisfying read. In every story of both collections, there is to be found a depraved tapestry of gilded greater Los Angeles society, quite literally ripped from the headline news of the day. Most mystery fans will love the idea of an honest man in a thoroughly dishonest world, on a righteous quest for justice. Once you get this triumph of American literature in your hands, mix your favorite drink, disappear to a quiet place with a comfortable chair (with good lighting), and enjoy the Great Master at work. If only more writers could write like this, then I would not need cable TV...

Published by Thriftbooks.com User , 21 years ago
Contained in this volume are the last four (of seven) Marlowe novels, the Double Indemnity script co-written with Billy Wilder (including lines that were cut), his famous essay on "The Simple Art of Murder", one on "Writers in Hollywood", another titled "Twelve Notes on the Mystery Story", and finally "Notes (very brief, please) on English and American Style". Couple these with thoroughly entertaining and sometimes revealing letters to friends and fans, and you can't miss.In one of these letters he even discusses fellow hardboiled writer Ross Macdonald's (here called John, as he hadn't changed his name yet) The Moving Target, which cribbed some ideas from The Big Sleep and Dashiell Hammett's The Thin Man.The novels themselves? Classic Chandler - enough said. If you'd like to know why you should expect the best in hardboiled detective fiction, well, read 'em all, or at least one. (If you're planning on that course of action, try the first in the series, The Big Sleep, included in a similar volume called Stories and Early Novels: Pulp Stories/The Big Sleep/Farewell, My Lovely/The High Window.)Bottom line, this is required reading for anyone who won't read just anything but at the same time doesn't limit themself to Anna Karenina.
Copyright © 2020 Thriftbooks.com Terms of Use | Privacy Policy | Do Not Sell My Personal Information | Accessibility Statement
ThriftBooks® and the ThriftBooks® logo are registered trademarks of Thrift Books Global, LLC