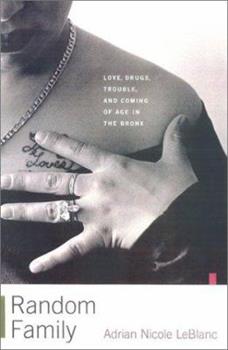 Random Family: Love, Drugs, Trouble, and Coming of Age in the Bronx

Random Family tells the American outlaw saga lurking behind the headlines of gangsta glamour, gold-drenched drug dealers, and street-corner society. With an immediacy made possible only after ten years of reporting, Adrian Nicole LeBlanc immerses the reader in the mind-boggling intricacies of the little-known ghetto world. She charts the tumultuous cycle of the generations, as girls become mothers, mothers become grandmothers, boys become criminals,...

Published by Thriftbooks.com User , 17 years ago
This is an outstanding book that required some patience to finish, but ultimately certainly paid off. It tells the stories of a group of Hispanic individuals whose lives, spent between the Bronx and other dangerous neighborhoods are related by family, love, crime or misfortune. I think the book can be roughly divided in two parts. The first part is the one I found harder to read, didn't stir much sympathy in me, and mostly succeeded in making me really angry and contemptuous towards most of the characters. Here you see them at their worst. Young, ruthless, unable to control any of their cravings for money, sex, or anything else that money can buy. Teenage sex is the rule, contraceptives aren't even mentioned, drugs are bought and sold as if they were (expensive and profitable) vegetables, women are repeatedly beaten up by bad boyfriends they don't want to leave. Then many central characters end up in jail, and the second part of the book starts. Here is when you start realizing how young these characters were when they ended up making the wrong choices that they will never be able to fix later in life. And here is where my symphathy gradually replaced my contempt. The second part of the book should be compulsory reading for every narrow-minded individual who thinks that everyone simply has what he/she deserves, and that these people should be just left to rot with their own problems. Here is where you start realizing that in an environment where most girls are molested before they reach puberty, where violence and drugs are the rule, and contraception is not even considered, kids end up doing a LOT of stupid mistakes before they are 15 years old, and when they will realize they should have behaved differently, that's already too late: boys are in jail, girls have 4 children, from 3 or 4 different fathers. The stories of Coco (and her girls) and Cesar, are particularly touching. I couldn't help feeling for Coco, who finally starts maturing after too many early pregnancies, when things are already out of control. And for Cesar, who needed years of jail to become a better man. This is, by the way, another aspect of this story that I found interesting and in some way, hopeful. Jails, in this book, are certainly terrible places, but here and there you also find peaks of humanity, both among the inmates, and among some of guards. Finally, the book is really very well written, in a dry, fairly neutral, but very effective style. The author succeeds in letting the reader decide how to react to each event, without imposing her point of view. Well done, and thank!

Published by Thriftbooks.com User , 17 years ago
I was so enthralled with this book that I read it in 3 days while working 16 hour shifts at work. I kept having to check to make sure that ms. LeBlanc wasn't actually making the story up or a member of the families she was writing about. The story was effortless, beautiful, dramatic and heartbreaking. I found myself living a diferent life than I had ever imagined or thought existed through reading this book. If you want to expose yourself to a part of this country that is as distinct in culture as anywhere else in the world, please read this book. You will find yorself speechless as you close it when you finish it.

Published by Thriftbooks.com User , 17 years ago
This is an amazing and all-consuming story. LeBlanc transports the reader into an extended family in the Bronx. She recounts the relationships, the fights, the betrayals, the drugs, the crime, the unintentional preganancies, the jail time, and much more for her intertwined cast of characters. Everything is presented as is--the only reflection on the characters' motivation is their own. LeBlanc does not try to extrapolate from their experiences or impart her own beliefs on the reader. The reader is left to draw his or her own conclusions from the interactions they read about. It's easy enough to say women in the ghetto need to start using contraceptions and get off their butts and get jobs. I learned through the people in this book that life is much more complicated than that. Children aren't afforded learning opportunities because their parents are using drugs and having unsavory characters around. No one wakes the teenaged girls up to tell them about pregnancy. The girls have no sense of self worth and want to have children to force the fathers of their kids to love them. Every woman in here was once sexually abused, so responsible mothers can't their there children with friends or family members who have random people traipsing through the house, and that prevents them from getting jobs and getting out of the house. This book comes full-circle with the story of one Bronx family. It opens with Jessica, pregnant at age 16. It ends 16 years later with Jessica's daughter Serena ready to get in as much trouble as her mother did at that age, despite the major strides Jessica has made at becoming a functioning member of society. LeBlanc's dedication to her task--combing through trial records, wiretaps, police reports, child welfare reports, and conducting years of interviews--has really paid off in this compelling narrative.

Published by Thriftbooks.com User , 19 years ago
This has to be one of the best books that I have ever read. LeBlanc grasped "it", the life, the city, the love or lack there of, the lifestyle, the losses and the helplessness. I read this book like I would have an article in Rolling Stone, holding on to every word, wanting to know what happened next. I could not put it down. It was a personal experience for me, having lived a portion of my life like the girls in Random Family. I must say that one of my frustrations has been that there are not enough of these kind of stories out there for us to read. This is the reality of our world, our social structure. Welfare is not a luxury, housing systems are not free living, not all criminals should remain prisioners. These are everyday people caught up in a cycle, a family cyle, generation to generation. These are our neighbors, the woman at the supermarket, the girl at the doctors office, just random people. And this book is just about that, a random family. There are so many families like this, torn apart, looking for the love that so often is mistaken for money, sex or a drug. I would recommend this book to anyone who asked. I believe that Ms. LeBlanc will be one of the greatest journalists of all time. I am so impressed with her writing and her willingness to study her subjects, living in less that acceptable accomodations, dedicating herself and her life to the research, becoming apart of their families. I consider this book one of the best, I hope that you will too.

Published by Thriftbooks.com User , 20 years ago
All of us have read many family stories but surely none as compelling or heartbreaking as this. Adrian Nicole LeBlanc, who has written for the New York Times Magazine, Esquire, The Village Voice, and others, gained unprecedented access to those living in an impoverished section of the Bronx. For some ten years the author shared their existence as she documented struggles, defeats, and transient victories. "Random Family" is an astonishing work of straightforward reportage; it is also written with heart. A stunning picture of life in the Bronx drug trade, "Random Family" is traced through the experiences of two girls, Jessica and Coco. In Part I, "The Street" we are introduced to Jessica who lived on Tremont Avenue, "...one of the poorer blocks in a very poor section of the Bronx. She dressed even to go to the store. Chance was opportunity in the ghetto and you had to be prepared for anything....A sixteen-year-old Puerto Rican girl with bright hazel eyes, a generous mouth, and a voluptuous shape, she radiated intimacy wherever she went. You could be talking to her in the bustle of Tremont and feel as though lovers' confidences were being exchanged beneath a tent of sheets. Guys in cars offered rides. Women pursed their lips, grown men got stupid, boys made promises they could not keep." Jessica's man of choice is Boy George, a young heroin dealer with money to spare and a willingness to do anything to earn more. He provides undreamed of escapes: trips, jewelry buying sprees, and a car that James Bond would envy. He's also free with physical abuse. Coco, a fourteen-year-old, is the other girl. "Boys called her Shorty because she was short, and Lollipop because she tucked lollipops in the topknot of her ponytail; her teacher called her Motor Mouth because she talked a lot." But, school wasn't high on Coco's list of priorities. She has eyes for Cesar, Jessica's younger brother, who is working hard at becoming a thug. This pair also enjoys the big time for a while, if you can relish luxury while your friends are being murdered. Teenage pregnancies are the norm, and being old at 30 isn't a surprise. Prison becomes home. "Random Family" is a look at a part of our country we would like to think does not exist. But, it does and the awareness of it sears. We owe a debt of gratitude to Adrian Nicole LeBlanc for her honesty and dogged courage. - Gail Cooke
Trustpilot
Copyright © 2022 Thriftbooks.com Terms of Use | Privacy Policy | Do Not Sell My Personal Information | Cookie Preferences | Accessibility Statement
ThriftBooks® and the ThriftBooks® logo are registered trademarks of Thrift Books Global, LLC