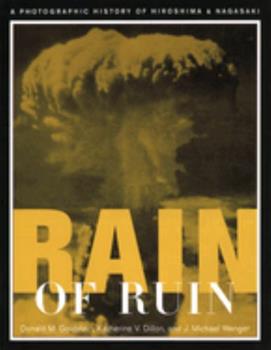 Rain of Ruin: A Photographic History of Hiroshima and Nagasaki

This photographic history of Hiroshima and Nagasaki provides the first comprehensive photographic record of the bombings and their aftermath, presenting a history of the two cities before and after the bombs drop and also including photos of American and Japanese politicians and military men involved in the bombing. Anticipate a detailed, well-rounded title. J. Michael Wenger is a historian living in Raleigh, North Carolina. The late Katherine V...

Published by Thriftbooks.com User , 20 years ago
I just received this book in the mail today, however I have all ready read half of it and have found it very stirring. Before my recent studies of Hiroshima and Nagasaki I did not have any idea of the devestation that went on over there. This is the most visual account I've seen to date. A chilling account to one of the worst mistakes in American history.

The Choice That Saved a Million Lives

Published by Thriftbooks.com User , 21 years ago
THE ONLY BOOK OF IT'S TYPE!!! The complete pictorial history of the weapon that changed the way mankind thinks of his enemy and war. Goldstein, in previous books, has given the world the most complete picture of the start of the War in the Pacific,by telling us both sides of how and why the events occurred. Now he ends the war with the Manhatten project and the dropping of the two a-bombs. This book is the only one I know of that presents the effects on Nagaski, the forgotten city. As Pearl Harbor and Hiroshima have become SISTER CITIES you need to have "Rain of Ruin" as the definitive companion to your Pearl Harbor collection.
Copyright © 2020 Thriftbooks.com Terms of Use | Privacy Policy | Do Not Sell My Personal Information | Accessibility Statement
ThriftBooks® and the ThriftBooks® logo are registered trademarks of Thrift Books Global, LLC