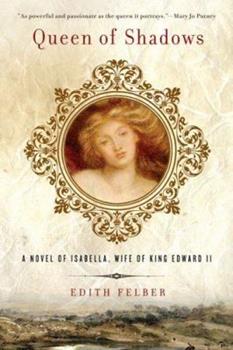 Queen of Shadows: A Novel of Isabella, Wife of King Edward II

In fourteenth-century England, beautiful Queen Isabella-humiliated by her weak, unfaithful husband-is emerging from the shadows to take her revenge. But her newly arrived, twenty-oneyear-old Welsh... This description may be from another edition of this product.

Queen of Shadows by Edith Felber

Published by Thriftbooks.com User , 15 years ago
This lady Edith Felber should write more historical novels. Tres bien!!! She definitely rates among the top authors of historical novels. If it didn't have two sex explicit scenes I would want it to be placed in all school libraries. The girl students nowadays love this kind of literature but this book wouldn't pass the approval of our school board.

Published by Thriftbooks.com User , 16 years ago
As a previous reviewer apparently does not understand, this is a work of historical FICTION. The author has chosen the parts of her research that worked best for her story. And as all historians know, historical research can find a different answer for any side of an historical argument. History books are often slanted according to the politics of the era or the author, so unless an author has a means of time travel, there is very seldom a definitive answer to historical questions. The parts of Isabella's life portrayed in QUEEN OF SHADOWS were chosen to illuminate her strengths and weaknesses, and to pull back the curtain and show the reader a slice of her life and loves. The book was written brilliantly to reflect Isabella's effect on history, from a woman's point of view. I thoroughly enjoyed this peek behind the curtains and the theory that Ms. Felber chose to put forward, and I'm looking forward to the next book!

Published by Thriftbooks.com User , 16 years ago
At twelve French Princess Isabella marries King Edward II of England. As she matures, she agrees with the assessment of Parliament that her spouse is weak and easily manipulated even by a relatively young female though his preference is male. When Parliament demands the monarch share the throne with the Earl of Winchester, Edward is ready to acquiesce, but Isabella objects. She assumes her homosexually inclined pathetic (at least in her mind) husband is willing to co-rule because he is attracted to the Earl's offspring, Hugh. Tired of her husband's failures, Isabella through her lady-in-waiting Gwenith meets Welshman Baron Owain de Rhys who in turn introduces her to Lord Roger Mortimer held in the London Tower. With the help of Owain and Gwenith, who hates Edward for slaughtering her family, she begins seeing the prisoner for sex and intrigue until she smuggles him out of the Tower and country to France where they complete their plot to overthrow Edward and place her son on the throne by 1326. Edith Felber provides a strong fourteenth century historical fiction tale that is filled with political intrigue but also has a somewhat biographical feel to the novel and a secondary romantic subplot (between the plotters) to anchor the fine story line. Fans of the author, if they recognize that Ms. Felber is historical romance writer Edith Layton will appreciate this well written tale of the QUEEN OF SHADOWS whose son became Edward III. Harriet Klausner
Trustpilot
Copyright © 2022 Thriftbooks.com Terms of Use | Privacy Policy | Do Not Sell My Personal Information | Cookie Preferences | Accessibility Statement
ThriftBooks® and the ThriftBooks® logo are registered trademarks of Thrift Books Global, LLC