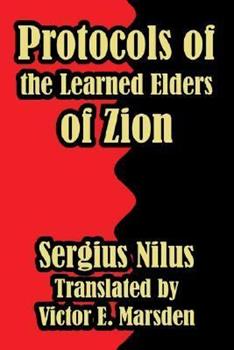 Protocols of the Learned Elders of Zion

The Protocols were first published in 1903 by Pavolachi (or Pavel) Krushevan, an instigator of the Kishinew pogrom, in his Russian newspaper called Znamia. They were published in English through... This description may be from another edition of this product.

A forgery but interesting from the historic view point

Published by Thriftbooks.com User , 13 years ago
The Protocols were first published in 1903 by Pavel Krushevan, an instigator of the Kishinew pogrom, in his Russian newspaper called Znamia. The book is usually composed a certain number of protocols, from 24 to 27. This is definitively an interesting work, if we take into account the historic aspects. In my view, it is a shallow anacronism to judge a book today because of the mentality of some people who lived in Russia 100 years ago.

A Russian forgery that affected history

Published by Thriftbooks.com User , 22 years ago
There is a very important lesson to be learned in how this rather silly short book was able to captivate the minds of millions of people since its publication in the beginning of a century. And this is in spite of conclusive evidence that it is a fraud - probably written by a Russian monk - being widely available since 1920s. It was, for example, one of the sources of inspiration for, and is specifically quoted in Mein Kampf. It continuous to be important: even to-day it is a bestseller in a number of Middle Eastern countries. For a detailed analysis of the book, see "A Lie and a Libel : The History of the Protocols of the Elders of Zion" by B. W. Segel; for those new to the subject, I would recommend getting both of these books at the same time. A copy of the Protocols is always close by in my office, just next to Mein Kampf. One might argue that historically the Protocols is the more influential one of the two.
Trustpilot
Copyright © 2022 Thriftbooks.com Terms of Use | Privacy Policy | Do Not Sell or Share My Personal Information | Accessibility Statement
ThriftBooks® and the ThriftBooks® logo are registered trademarks of Thrift Books Global, LLC