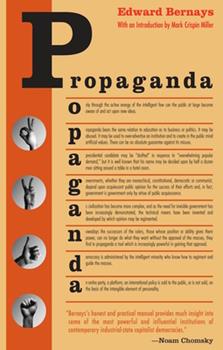 "Bernays' honest and practical manual provides much insight into some of the most powerful and influential institutions of contemporary industrial state capitalist democracies."-- Noam Chomsky "The conscious and intelligent manipulation of the organized habits and opinions of the masses is an important element in democratic society. Those who manipulate this unseen mechanism of society constitute an invisible government which is the true ruling power...

Should be read in schools

Published by Goody , 1 year ago
Very informative and understandable should be read by every human for a base level of understanding government deception. The original definition of terrorism, government by intimidation.

Published by Thriftbooks.com User , 12 years ago
Americans think they live in a democracy, but they actually live in a Corporate War State controlled by the media, corporations and the wealthy, which use indoctrination in schools, family, and work to shape selective minds. Massive subsides to bureaucracies keep tabs on information and people, made easy through technological developments and information storing in computers. Secret and clandestine foreign "centers of intelligence" (CIA, NSA) wage war with world economies and non-compliant leaders. By giving the masses daily measured quantities of Propaganda, they are able to manipulate them and even use them towards their advantage (see The McCarthy Era - intense anti-communist suspicion). They use uninformative "news" casts (filled with sensational material), tabloid journalism, pornography, reality TV, fast food, identification with team sports, etc to shape impressionable and non-critical minds. It's a pretty easy conquest, as most Americans aren't very able to distinguish that their brains are turning to mush, those who do think are quickly eradicated by the indoctrination system within or made into a non-threat. Good book. Too bad no one will read it, except in Europe. This is a common sense book that details the techniques used by the American political system to control the masses. America has never really been a very intelligent place, so it was always easy for corrupt leaders to swindle their way in.

Published by Thriftbooks.com User , 14 years ago
From the creator of public relations, Edward Bernays describes how he discovered to manipulate and engineer the consent of public opinion. This book is a conceptual model for governments, corporations, and lobbying firms to show the principles behind swaying public thought and opinion and controlling the masses. As the nephew of Sigmund Freud, Edward Bernays was able to learn from the master of psychoanalysis and through his many opportunities working for various of the United States largest corporations. This book was incredibly useful and informational. I would recommend it to anyone interested in swaying opinion or being able to identify it in advertising, news, or public figures. Edward Bernays is the utmost authority on the subject so much so that even the Germans in the Nazi political party used this book to spread their policy beliefs. This book is still relevant today in a world of spin. Edward Bernays runs through the psychology of developing public opinion and runs through several different areas where it could be applied from government to being implimented in the education system. Regardless of the brilliance this book contains, it still was written as though a lay-person was the intended audience. I would highly definitely recommend this book.

Published by Thriftbooks.com User , 15 years ago
I'm glad this book has been re-published so people can read it. This is a book that until now have been very hard to obtain. For years this book was the unofficial handbook for the PR industry. It is important to read and understand the contents of this book to understand the history of PR. The book gives a foundation to understand the fine art of "control of the public mind" that we see today. This book can perhaps throw some light on the techniques used in present history concerning among other the "War on Terror". I will also recommend "Crystallizing Public Opinion" by the same author (if you can find it) and "Public Opinion" by Walter Lippmann. As already stated in a review, the 5-star rating is primarily for the value (and importance) of this book.

Published by Thriftbooks.com User , 16 years ago
The rating here is primarily for the value of this book, smartly put back into print. Propaganda, though written in the late 1920s, is an excellent resource for a citizen in general. This manual, a seminal document, is a key resource on the thoughts and workings of the public relations industry, then only a speck compared to what it is today. Everything from corporate PR to advertising in general has basically internalized what is covered in this book in order to serve those institutional functions that mold the public's mind. This is all related to the 'manufacture of consent', something that Chomsky, who writes a good intro here, and Ed Herman explored in depth in their book 'Manufacturing Consent' where they lay down a Propaganda Model. This is a huge topic for Americans, period. While media and their role, and their 'slants' is a hot topic (sometimes even within the media, but to limited scope of discussion) this book is a straightforward reprint of the PR industry manual. It's no 'secret'--it's more like company policy. It's far more illuminating than the latest pundit book of the week, discussing, among other things, the 'liberal' media, say. Don't let the intro or its author derail you from reading this--this is nothing more than a mini-bible on how to manipulate the masses in an institutional framework (media, PR, government, etc). There's nothing really controversial here, since this is basically a historical document that still holds up after decades. Highly recommended.

5 Stars--but Not in a literary sense

Published by Thriftbooks.com User , 18 years ago
The first lines: "The conscious and intelligent manipulation of the organized habits and opinions of the masses is an important element in democratic society. Those who manipulate this unseen mechanism of society constitute an invisible government which is the true rulling power of our country." This was written in 1928. This newphew of Sigmund Freud worked in Woodrow Wilson's creation, the Committee on Public Information, and saw first hand how the public's mind can be manipulated. Wilson was elected on a peace platform and had to transform the country to go to war against the German Kaiser. Bernays later helped publicize the American Tobacco Company, and is credited as a "father" of public relations. Anyone interested in understanding how the masses are moulded by the powers that be must read this book!
Copyright © 2020 Thriftbooks.com Terms of Use | Privacy Policy | Do Not Sell My Personal Information | Accessibility Statement
ThriftBooks® and the ThriftBooks® logo are registered trademarks of Thrift Books Global, LLC