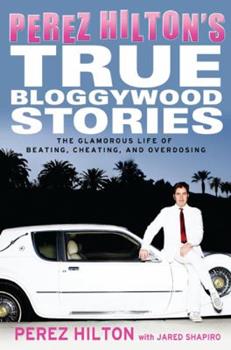 by Jared Shapiro and Pérez Hilton

This is raw and unprotected--Just like celebrity sex I'm back and bigger than ever I'm taking on the top celebrity scandals that rocked the world and changed Hollywood forever. From Chris "Beat-Her-Down" Brown's beating of Rihanna to reality "stars" Jon and Kate's divorce times eight, I'm taking you inside every moment and detail to tell you what really happened. NO ONE will be spare. How long till Britney melts down again? When will Jen REALLY get...

Published by perez sucks , 2 years ago
I am very disappointed. this took 69 days to send and once i got it i was in tears almost. i could’ve easily looked up these tragic stories on the inter webs for much cheaper. none of these stories shocked me in the slightest and left me very very very very UNSATISFIED. WILL NEVER RECOMMEND THIS EVER EVER

Published by Thriftbooks.com User , 12 years ago
ONLY HE WOULD HAVE THE SCOOP ON ALMOST ALL OF THE CELEBS IN HOLLYWOOD AND TELL IT THE ONLY WAY HE KNOWS HOW--EXTRAVAGANTLY AND WITH ALOT OF FLAIR!!!

Published by Thriftbooks.com User , 12 years ago
Loved the book. A must read. If you love Hilton's style you can't miss this one. If you hate Perez Hilton, you need to read this to see what he says next.

Published by Thriftbooks.com User , 12 years ago
Loved his interview on The Howard Stern Radio Show on Sirius Sattelite Radio on 12/01/09. Made me want to get the book: HOWARD STERN'S MANSCAPING EDICT Don't shave the whole thing; just trim it so none of the hairs are longer than your penis: "Nobody wants to see a billy goat down there." PEREZ HILTON, QUEEN OF ALL BLOGS After a break, Howard then turned to Perez Hilton, who said he was in town promoting his new book, 'True Bloggyworld Stories.' Perez added that his blog-empire had expanded to include two employees ("My sister and another girl and me.") but he's the mastermind: "I still work 16 hours a day and I love it." Asked about Tiger Wood's mistress, Perez laughed: "I actually know this girl. Not very well...she used to date this big club owner in Vegas." Perez went on: "She gets around. Before Tiger Woods she was seen around with Ryan Seacrest and David Boreanaz." Perez added that he didn't believe either her or Tiger's denials: "I believe the wife that beat Tiger's ass because she found out it was really happening." PEREZ ON HIS FEUDS WITH DEMI & MILEY Howard asked about Perez's feud with Demi Moore, so Perez laughed: "Can you name the last hit movie Demi Moore was in?" Howard admitted it had been a while, and Perez continued: "Once you've achieved a certain level of fame, you can coast for the rest of your life...if she's listening, Demi, you're f'ing stupid." Perez said he actually tried to provoke fights - like he had with Demi - on Twitter: "I f'ing love it." Perez laughed that he'd also feuded with Miley Cyrus after dubbing her 'Slutty Cyrus' - specifically citing her 'Pretty Woman' Halloween costume: "You know what she went dressed as? A hooker." Perez said they'd since patched things up: "We're friends actually. She just emailed me the other day." Perez even divulged the email's content, which read: "Can you tell Adam Lambert I'm obsessed with him?" FIND THAT PLUG DOC Perez told the crew he wanted to consult the doctor who did Matthew McConaghey's hairplugs: "I will sign a confidentiality agreement because I want him to do me."

Perez has the gossip goods!

Published by Thriftbooks.com User , 12 years ago
I really enoyed his last book, and this one is just as fun and snarky if not more! I get that it appears to be the same gossip on Jon and Kate, Michael Jackson, Robert Pattinson, etc. that we've all seen on TV and magazines, but come on, what we really want is Perez's take on it all! He's fearless and spares no one, which gives him an edge over the rest. And ultimately, he does his research and gives his opinion from the facts and tips he gathers. Yes, he's clearly hated, but you can't doubt that he's good at stirring the pot. Some of my favorite parts of the book are his top predictions (#2 on Kanye West is hilarious) and the yearbook awards. Very entertaning. And what he really does best is lay down the real truth behind the gossip rumors. His take on Brad and Angelina's reported secret split? "I think Brad and Angelina are happy, and when they're not, they probably just have Sting and Trudie-like eight-hour sex sessions. Together forever? Not forever. But maybe for another ten years!" And another amusing part of the book are his personal encounters with celebs like Drew Barrymore and Christina Aguilera! He is definitely not afraid to tell it like it is! This book is easy to get hooked on and it's basically all the juciest and best gossip compiled into one set. If you're obsessed with finding out the low down on celebs (and who isn't??), this book is a must!

IF you love trashy gossip....

Published by Thriftbooks.com User , 12 years ago
and who doesn't! This book does what is promised. Maybe it won't be winning any awards but if you are a fan of Perez Hilton's popular blog, this is a fun read. I recommend!!!
Trustpilot
Copyright © 2022 Thriftbooks.com Terms of Use | Privacy Policy | Do Not Sell or Share My Personal Information | Accessibility Statement
ThriftBooks® and the ThriftBooks® logo are registered trademarks of Thrift Books Global, LLC