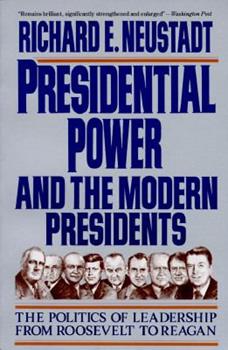 Presidential Power and the Modern Presidents: The Politics of Leadership from Roosevelt to Reagan

Thirty years ago Richard Neustadt published Presidential Power, which became a widely studied book on the theory and practice of presidential leadership. Presidents themselves read it and assign it to their staff for study, as did the intructors of hundreds of thousands of students of government. Now Richard Neustadt re-examines the theory of presidential power by testing it against events and decisions in the administrations of the later modern presidents...

Machiavelli in the White House

Published by Thriftbooks.com User , 18 years ago
This is indeed one the classics in the field of presidential studies. Neustadt's contribution, although somewhat commonsensical at first glance, is that despite the huge increase in formal powers that the president has acquired over the years, the most fundamental power the president possesses is the power to persuade. The president must persuade other independently elected officials to do as he sees fit. This, in a city such as Washington DC where people have seen powerful politicians come and go over the years, is easier said than done. The president must be attuned to the nuances of political issues and not allow himself to become cut off from the political back and forth by his retinue of aides. He must retain the prerogative of making the final political decision and avoid becoming a clerk and simply ratifying the decisions made form by the staff and the bureaucracy. Further, he must define what is in his political self interest. The president does so by keeping himself informed, by employing a system of information that allows him to be at the center and making real decisions; and by carefully husbanding the power and carefully cultivating the image of the president. While the president does posses the power to command, instances where he must rely on command are a prima facie failure of persuasion. Finally, the president must ensure that others understand his power. He must be able to strike a modicum of fear into both his allies and his foes. In the political sense, this means the ability to hurt someone electorally. If I as the president can campaign against you and make it stick, you will be more likely to fear me and be persuaded by my requests. This is not an easy read, but if you are involved as a student of politics you WILL read this book at some point. A classic and well worth the effort. John C. McKee

One of three seminal works on the Presidency

Published by Thriftbooks.com User , 22 years ago
Neustadt's book describes one of three theories about Presidents. Everyone knows that there is a balance of power between the judiciary, the legislative and the executive branches. Neustadt claims that the President is the weak leg of the stool and that he is unable to govern alone. He must use his powers of persuasion in order to convince the other branches of the government to do his bidding.As part of a graduate program in political science with a concentration on the United States, you will read this book. If you don't, I am happy to go out on a limb and say that there is something wrong with your program! This is one of the three seminal works available on the Presidency. There are others but this is one of the big guns. If you read this book, along with Corwin's "Presidential Power" and Rossiter's "The American Presidency", you'll understand all three theories of presidential power: the weak President (Neustadt), the strong President (Corwin) and the President wearing many hats (Rossiter). In reality, all three are correct.It's interesting but a scholarly read. It's not a book you'd pick up for light after dinner reading.

still useful after all these years...

Published by Thriftbooks.com User , 22 years ago
The 1960 edition of Presidential Power has had a long shelf-life, and has grown over time to append chapters on post-Eisenhower presidents. But Neustadt's original thesis -- that presidents are Constitutionally weak, not strong, and that they therefore must leverage their bargaining advantages to the fullest if they want to be effective leaders -- still holds up. (Think the 104th Congress here.) It's hard to skim Neustadt -- he writes the old-fashioned way, in long, graceful sentences and paragraphs that actually hang together. But it's well worth while to settle in and get a sense of what it takes to be president. It's not clear that 2000 is going to be a good year for the American polity...

Don't stop half way through

Published by Thriftbooks.com User , 23 years ago
About half of the way through the book, Neustadt seemed to be saying the same things over and over again. I almost stopped reading. However the incredible tidbits of advice in the first half encouraged me to continue. It was certainly worth it. The last 5 or 6 chapters were written over the period between the Kennedy assasination and the end of the Reagan Administration, allowing Neustadt to ammend many of his ideas from the first 8 chapters (originally published in 1960) making the book far more lively. A wonderful read for those with a weak knowledge of the last 50 years. If you know a lot about the Korean War, Bay of Pigs, or Iran-Contra, the book may be a little too much review. Otherwise it is fabulous.

Published by Thriftbooks.com User , 23 years ago
Apparently this is THE book to read if one desires to get a feel for the modern day presidency. In any other presidential book, one will see Neustadt's referred to quite often. As a realist, he describes the presidency not in terms of how it was designed by the framers. Neither does he describe the Constitutional process of accomplishing policy objectives. Neustadt explains that the truly effective president uses his position of authority to persuade others. FDR, Neustadt's shining example, knew how to work with people and get them to do his bidding. Downfall (and perhaps because I am no brain surgeon): but the book was sometimes tough to follow, hence it is often boring. Oh well, perhaps the true intellectuals will grasp it all. A DEFINITE FOR ANYONE WHO WANTS TO UNDERSTAND AMERICAN GOVT!
Trustpilot
Copyright © 2022 Thriftbooks.com Terms of Use | Privacy Policy | Do Not Sell My Personal Information | Accessibility Statement
ThriftBooks® and the ThriftBooks® logo are registered trademarks of Thrift Books Global, LLC