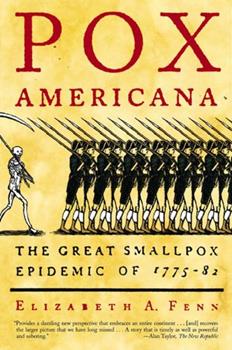 by Elizabeth A. Fenn

The astonishing, hitherto unknown truths about a disease that transformed the United States at its birth A horrifying epidemic of smallpox was sweeping across the Americas when the American Revolution began, and yet we know almost nothing about it. Elizabeth A. Fenn is the first historian to reveal how deeply variola affected the outcome of the war in every colony and the lives of everyone in North America. By 1776, when military action and political...

Published by Thriftbooks.com User , 16 years ago
Elizabeth Fenn synthesizes an outstanding concoction of accounts into a cohesive narrative of smallpox's movement across North America. Her account sheds new light on a field relatively untouched by historians. Infusing modern insight into historic accounts, Fenn provides the reader with an excellent vantage point to understand not only the physical and medical impact of the smallpox epidemic in North America, but also the political, social, financial, and military ramifications of its impact on everyone - from American troops to former slaves enlisted into the British forces, to Canadian fur trappers, to Spanish settlers in Mexico, to the Native Americans of all of North America. Fenn's mixture of narrative and analysis marks the perfect amalgamation of compelling storyteller and critical historian. She butresses even a seasoned expert's historical framework and enlivens the work with tempered passion for her subject. Pox Americana provides the reader with an accurrate, detailed, and delightful account covering one of American history's most important events. Fenn structures the work with precision, never failing to captivate the reader's interest or sharpen the reader's historical perspective.

An Unknown Aspect of American History

Published by Thriftbooks.com User , 19 years ago
Pox Americana tells the story of the great smallpox epidemic of the 1770s and 1780s in North America. The epidemic affected the American Revolution because colonial soldiers who had not been previously exposed to smallpox contracted it in huge numbers, particularly in the New England and Southern colonies where inoculation had not been a widespread practice. As a result of the disease British troops, most of whom had already been through the disease or been inoculated for it, found another advantage over the Americans in the early stages of the war. Fenn goes into somewhat harrowing detail as she describes the sufferings of those who contracted the disease and those who went through the inoculation process, which must have been almost as awful as the disease itself.Although the British had an advantage over the colonial soldiers in that most of them were already immune to smallpox, the King's forces still suffered from the epidemic due to the inroads the disease made among the slaves who flocked to join the British armies, particularly in the Southern colonies. In the African American population the smallpox germ found another previously unexposed host, and the results were once more incredibly deadly. Fenn documents several cases where the British and later the Americans themselves practiced a primitive type of biological war by releasing contagious people into unexposed populations and by allowing items used by sufferers to be distributed to healthy peopleIn the Native American territories west of the thirteen colonies smallpox also spread like wildfire. Fenn does a good job of tracing possible routes the disease followed as it spread from settlement to settlement along trade routes and shipping lanes, decimating the Indians, who again had no previous exposure and thus no defenses. Pox Americana is valuable because it reminds us of our vulnerability to diseases which spread silently from victim to victim, and helps us realize that one of the deadliest weapons of war is not man made (though it is often deliberately helped along its way)

Another side to history!

Published by Thriftbooks.com User , 20 years ago
If we think that America has never known an infectious epidemic other than the Great Influenza after World War I, we'd be wise to consider the smallpox pandemic that swept the length & breadth of the North American continent just as the Revolutionary fever did.Pox American: The Great Smallpox Epidemic of 1775-82 is a fascinating way to learn about the early years of our nation when cultures collided on this continent. Each chapter starts with a story of one man - a ship's captain exploring the Straits of Juan de Fuca or a New England volunteer in the Continental Army or a missionary riding the dusty Southwest trails. From these individual's stories we can see scope of the virus' reach. With pictographs, maps, charts & photographs, this author brings this contagion close to home!Sometimes the dread disease was an invisible passenger upon an unsuspecting carrier that would arrive in a tribe of otherwise healthy people & within weeks, the entire community would be dead. Sometimes it was intentionally sent forth by our wily forefathers to do their deadly work. Smallpox haunted our ancestors from coast to coast; from Russian promyshlenniki (hunters & traders) who first explored & then enslaved the residents of Alaska to America's breadbasket, where entire native communities of farmers & hunter-gatherers were wiped out in weeks to Hudson Bay, New Orleans, The South as well as Mexico City.Elizabeth Fenn writes: "The pestilence can teach us the ways in which other upheavels - native warfare, missionization, the fur trade, and the acquisition of horses and guns...reshaped human life on the North American continent. The movement of the virus from one human being to another shows us how people actually lived in the late eighteenth century. For despite the political, social, and racial boundaries of the day, people rubbed elbows."I cannot do justice to the scope & breadth of this author's research. Pox Americana is a compelling read, a dread-filled chronicle of another aspect of our story & Professor Elizabeth Fenn has written a rich & interesting story with a huge Notes Section, as befits a teacher of history!

Comprehensive and a joy to read!

Published by Thriftbooks.com User , 20 years ago
Pox Americana by Elizabeth Fenn is a great piece of work! Smallpox was one of those virtually forgotten diseases. Elizabeth's book brings together the most comprehensive and yet an easy reading reference on the disease. The information is presented in a logical and systematic way allowing for a smooth flow and easy reading. The book demonstrates how such diseases are not just military factors but are wars in themselves! Elizabeth shows clearly how the disease has shaped our nation. This is rather timely considering the dire need for such a reference under the prevailing threats of bio-terrorism. It is a book that should provide all the information that you need to understand the threats from smallpox. I particularly liked the thorough examination of the historical facts which eases viewing our present situation in an historical context. The other book that really compares with it is "Bugs in Armor: a tale of malaria and soldiering" by Robert Bwire.

Published by Thriftbooks.com User , 20 years ago
Pox is a truly scholarly work based on primary historical documents. It is obvious that it was a true labor of love by Prof. Fenn.The epidemic that Fenn studied is a particularly valuable in understanding a little known area of the American Revolutionary War (though her scope covers the entire North American Continet).Many know that the British had released smallpox on French alligned tribes seiging Ft. Pitt during the French Indian War. Less known was the great concern that General George Washington had about smallpox during the American Revolution. Elsewhere, it has been described that the main reason the seige of Boston lasted as long as it did was due to smallpox, and that the Continental Army was the first army in world history to require compulsory immunization - force-wide.Prof. Fenn paints an even darker picture. It could be said that the events with smallpox during the Revolutionary War was America's first biological emergency. She clearly documents cases that appear to be obvious attempts by the British to infect COntinental Forces with smallpox at Boston, and later in Virginia. The Virginia case is most appauling as the British turned freed slaves (loyalists) into their delivery vehicle.The failure to innoculate forces was cited as the main reason the Continental Army failed to take Canada. The army literally melted away, with replacements being taken down as soon as they arrived.Eventually, 1777, the Continental Army required that all new recruits go through innoculation stations before joining the army.The remainder of the book (2/3rds) describes the impact of smallpox on other communities in North America. The impact on the tribes around Vancouver at the time clearly documents how devistating disease can be to a civilization.
Copyright © 2022 Thriftbooks.com Terms of Use | Privacy Policy | Do Not Sell My Personal Information | Accessibility Statement
ThriftBooks® and the ThriftBooks® logo are registered trademarks of Thrift Books Global, LLC