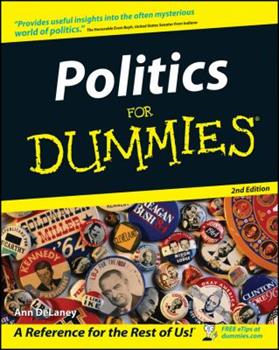 (Part of the Dummies Series)

Whether you understand politics or not, it still affects your life in very real ways. But American politics can be confusing. What's a caucus? How do primaries work? How can you sift through all the babble to get to the truth? Politics For Dummies offers all these answers and more. And it's not just for political novices; even those with a firm understanding of politics can use this book to fill out their knowledge of the little complexities - from...

I wanna learn about Politics

Published by Richard , 10 months ago
I am politically ignorant and want to learn about politics in general, I thought this was the perfect thing for me. Unfortunately, it addressed and talked about the election process, nothing else. AND, for that matter, it didn't even cover the Electoral College. Pretty lame....

Published by Thriftbooks.com User , 13 years ago
Right now Sarah Palin is using this most adequate political tool preparing for her debate against Joe Biden. After tomorrow evening (10/02/2008) we'll see how it worked.

Published by Thriftbooks.com User , 14 years ago
Haven't read the whole thing, but so far it has been very simple to understand and read.

Be careful when decrying bias

Published by Thriftbooks.com User , 19 years ago
Some people interpret bias whenever something doesn't square perfectly with their view. In this case describing Republican voters as white, upper-class etc, happens to fit the facts presented by countless polls. It's just a fact. Read it as such. This book is extremely helpful for the novice seeking more information on politics. Don't let Rush Limbaugh style rants against "liberal bias" turn you off.

Published by Thriftbooks.com User , 21 years ago
This book is a great introduction into political participation. It is written in simple language (as should be inferred from the title) and provides a fairly clear map for anyone who is interested in ACTIVE participation in politics. If you are interested in overcoming the American political apathy, buy this book.
Copyright © 2020 Thriftbooks.com Terms of Use | Privacy Policy | Do Not Sell My Personal Information | Accessibility Statement
ThriftBooks® and the ThriftBooks® logo are registered trademarks of Thrift Books Global, LLC