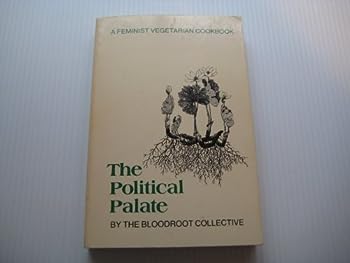 This is the best cookbook I have ever used

Published by Thriftbooks.com User , 14 years ago
I have been cooking out of this cookbook since it was born; it's binding is pretty ragged and the pages have food on them I have used it so much...(I just ordered another copy which is why I saw these reviews) I am not vegetarian, I eat meat (organic) but the recipes are so good that I cook many of them over and over, always to wows at the table. And, I happen to be a reasonable gourmet cook, so this is the frame for my comments. I went to the restaurant several times when I lived in New Haven...and it was one of the reasons I was sad to leave New Haven because it was such a wonderful place to eat, open airy light atmosphere as well as fabulous food. I am writing this review because I think some of the reviews here have quite missed the point. This book is called The Political Palate. This is a restaurant that was formed in the 70s by Lesbian Feminists - because they were politically oriented they were able to think in terms of slow food, vegetarian, eat local, eat organic, eat seasonal ...way ahead of all the current chefs, only Alice Waters on the West Coast was in parallel play ..but having tasted both several times, Chez Panisse is great; the food at The Bloodroot Collective was better. I am straight, and I value the feminist statements and poems that accompany the recipes... and often read them to my guests. I have always seen these comments as a way of connecting to all women and to my own heart as well as putting this amazing food in perspective.

Published by Thriftbooks.com User , 15 years ago
There's that miso gravy, for example. Everyone that's tasted it now calls it "The Gravy." That's reason enough to have a copy of this book around, but other recipes are good too. Some of the combinations of ingredients may seem improbable - trust the authors when that happens. A happy surprise lies in your future, most likely. Then there's the not so good, specifically the feminist/political stuff. I'm usually pretty good at reading around such annoyances, but there are so bloody many of them here. It feels like a parody of that candy ad: "You got your politics in my cook book!" "You got your recipes in my manifesto!" -- wiredweird

Published by Thriftbooks.com User , 22 years ago
This has long been one of my favorite cookbooks. I have been cooking from it for more than fifteen years now. I have made the onion soup recipe countless times. In addition to the great recipes there are expressions of the authors' strong feminist opinions. I found them stimulating. This is the first in a series of books all of which are excellent.
Trustpilot
Copyright © 2022 Thriftbooks.com Terms of Use | Privacy Policy | Do Not Sell My Personal Information | Cookie Preferences | Accessibility Statement
ThriftBooks® and the ThriftBooks® logo are registered trademarks of Thrift Books Global, LLC