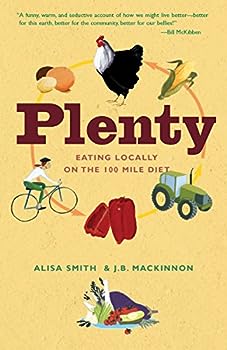 Plenty: Eating Locally on the 100-Mile Diet: A Cookbook

Like many great adventures, the 100-mile diet began with a memorable feast. Stranded in their off-the-grid summer cottage in the Canadian wilderness with unexpected guests, Alisa Smith and J.B.... This description may be from another edition of this product.

Worth a Read and a Thought

Published by Thriftbooks.com User , 14 years ago
Most importantly, this book is not preachy or righteous. They make that clear in the first chapter, and I found it to be a relief. It's also written in a very relaxed style and the alternating authors in each chapter provide a deeper context. The authors provide a lot of insight into what we consume and how we consume it. Although the book doesn't strive to be life changing, I have to say it is habit changing. Even if you don't choose to eat locally, you won't be able to resist looking more carefully at where your food is from. The recipes at the beginning of each chapter are a nice plus!

Published by Thriftbooks.com User , 14 years ago
This book opened my eyes to just how much we spend on our food and just how poorly we are fed. The triumph of the food industry in the 20th century is that we feed more people for less than ever before. The sad part is that everybody eats the same thing, and we pay more for it than ever before in other ways than our grocery bill. It is written in alternate fashion, first one chapter by Alisa Smith, followed by a chapter written by James MacKinnon, her mate. They chronicle their efforts at eating only what they can obtain within 100 miles of their apartment in Vancouver, BC, making exceptions only for food already on their pantry shelves. Much more than the story of a year of local eating, the book also explores this couple's struggle to revive other important relationships. That they succeed in every way is a great encouragement to anyone troubled at finding themselves disconnected. It will make you yearn for the food options of yesteryear - who knew there were so many dozens of different varieties of honey, or that there was once an orange variety that would thrive in BC? Salt Island alone grew more varieties of wheat and apples than are even available today. Your friendly local butcher knew what cut you preferred, and you knew you could trust your fish market man. Fortunately, all that variety is not lost forever. Small seed companies like Territorial Seed Company in Cottage Grove, OR, and seed exchanges like The Seed Savers Exchange (google them) are helping restore heirloom varieties to prominence. Read this book, then buy or trade some seeds and plant them, go shopping at your local farmers' market, and help change the way we eat!

Published by Thriftbooks.com User , 14 years ago
As you can see by the title, I've just finished reading Plenty: One Man, One Woman, and a Raucous Year of Eating Locally by Alisa Smith and J.B. MacKinnon. Ms. Smith and Mr. MacKinnon are 2 journalists who live together in a one bedroom apartment in Vancouver, British Columbia. They decide to try the experiment of eating only local food for the year when they learn that the food a typical North American eats travels 1500 to 3000 miles from origin to plate. They define "local" as a 100 mile radius, determined in part by the geography around them, i.e. mountains, ocean, etc... One of the problems they face is that they decide to start the experiment on March 21, the first day of Spring, without have really prepared for it. They start off eating mainly cabbage and potatoes for weeks on end. Another issue was wheat. They find a local farmer who had planted wheat as an experiment the year before, but had abandoned it. He let them have as much as they wanted out of a 1-ton bag. Unfortunately the wheat was infested with rodents, and later weevils. Months later they find another farmer who supplies them with fresh flour and bread. They plant a garden in a community plot and cultivate a group of farmers and fishermen and give themselves up to preserving food for the winter. But this isn't just a story of food and eating. It's also a love story. The authors alternate writing the various sections. Ms. Smith grew up in a home where her father slowly died of MS. She was always dreaming of being happier "somewhere else" and developed a serious case of wanderlust. During this year of local eating, she is wondering if her 14 year relationship with Mr. MacKinnon was all there was to life and if she shouldn't strike out again on her own just for the novelty of it all. She falls into a deep depression. Mr. MacKinnon knows something is wrong, but can't get Ms. Smith to talk to him about it. He's about to give up on the relationship, when he's sent out on a journalistic assignment for a few weeks. Ms. Smith realizes how full her life is with Mr. MacKinnon in it and sets out to woo him back. The book was written 2 years ago and they are still going strong. They have a website detailing their on-going efforts to eat responsibly. www.100milediet.org

Published by Thriftbooks.com User , 14 years ago
Eat Locally. The subject of this book has the potential to be incredibly preachy, fundamentalist, and dogmatic. Instead, it's down to earth, fun, and intelligent. The authors teamed up to write about their yearlong adventure from 2 points of view - his and hers - alternating author by chapter. I was afraid when I bought this book that it would end up being another well-intentioned half-read paperweight sitting on my bookshelf. I'm happy to report that I devoured it in just a few sittings. It even has recipes. It's easy to feel helpless to take any meaningful action when faced with all that is going on. The grassroots effort to eat locally has the potential for effecting real change in our landscape, economy, and health. After reading this book, "Eat Local" is more than just a slogan - its something I intend to do, and just as importantly, its something I intend to have fun with.

Published by Thriftbooks.com User , 14 years ago
I just finished this book and liked it so much I had to add a review. I had already heard about their 100-mile diet and I had read their magazine articles from the web site, so I was reluctant to pay full price for the hard cover, but am so glad I did! It is not just a reprinting of the web site, in fact I recognized very little material. It is not a how-to book or strictly an investigative report. It is the perfect blend of memoir, essay, journalism, with a little how-to as seasoning. I turned the pages as fast as a good novel! I was surprised by how much I enjoyed it! I would recommend it to most anyone, not just foodies or regional readers.
Trustpilot
Copyright © 2022 Thriftbooks.com Terms of Use | Privacy Policy | Do Not Sell My Personal Information | Accessibility Statement
ThriftBooks® and the ThriftBooks® logo are registered trademarks of Thrift Books Global, LLC