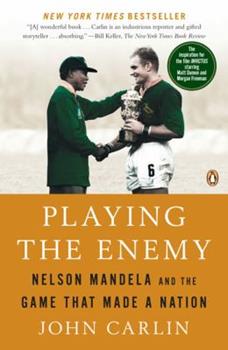 Playing the Enemy: Nelson Mandela and the Game That Made a Nation

The inspiration for the film INVICTUS, starring Matt Damon and Morgan Freeman. Beginning in a jail cell and ending in a rugby tournament- the true story of how the most inspiring charm offensive in history brought South Africa together. After being released from prison and winning South Africa's first free election, Nelson Mandela presided over a country still deeply divided by fifty years of apartheid. His plan was ambitious if not far-fetched: use...

a must read book

Published by Thriftbooks.com User , 11 years ago
If you saw the movie Invictus and certainly if you did not this is still a must read book in my opinion. There was so much more going on at the time than the movie could possibly tell us and to read the book you see the wisdom and skill of Nelson Mandela and others to prevent a blood bath in South Africa at the time of this story. There is much for the world to learn from this man and others to aspire to.

Published by Thriftbooks.com User , 11 years ago
Awe inspiring. Carlin gives enough back history of South Africa and the poltical tension that preceeded the 1995 World Cup Rugby game to make you want to stand up and cheer at the end of the book.

Published by Thriftbooks.com User , 13 years ago
This book is an absolute masterpiece of writing, a true gem and one that will certainly melt the hearts of many. On the surface it is about a rugby match between South Africa's Springboks and New Zealand in 1995. But it is representative of much more because, as the author shows, this match helped bring together South Africa after the fall of Apartheid, healing, at least in a small way, the anger of the blacks and the fear of the whites that the new nation would reject them. This was clear when Mandela came to support the rugby team, which had been seen as a symbol of Afrikaner nationalism, wholeheartedly. The book is more than the game, it covers many important characters and their reactions on the day of the match. The author is certainly an expert on South Africa, having lived there as a journalist, and he understands the soul of many of the people of the country. He understands also the history of the Afrikaners, the tradition of the 'Bitter enders' who had fought the british to 'bitter end' in the Boer War. This is a very nice book, an important story and one that will surely inspire. Unfortunatly the story paints a perfect utopian pciture of South Africa, one that has not stood the test of time. With the murder rate the highest in the world, AIDs running wild, farm invasions and the prospect of a new president whose motto used to be 'bring me my machine gun', South Africa's 1995 rugby match may well have just been a moment of reconciliation that could not last. Seth J. Frantzman

Published by Thriftbooks.com User , 13 years ago
John Carlin's wonderful book further illustrates the sheer genius of Nelson Mandela, the politician. For those of us who predicted that apartheid in South Africa could only end in a bloody deluge, "Playing the Enemy" proves that miracles are possible when even just one man who holds a position of moral authority is determined to avert disaster.
Copyright © 2020 Thriftbooks.com Terms of Use | Privacy Policy | Do Not Sell My Personal Information | Accessibility Statement
ThriftBooks® and the ThriftBooks® logo are registered trademarks of Thrift Books Global, LLC