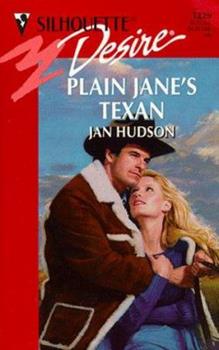 Plain Jane's Texan by Jan Hudson released on May 25, 1999 is available now for purchase.

I absolutely LOVED this book!

Published by Thriftbooks.com User , 20 years ago
Just a quick note to say I thoroughly enjoyed this book and her sister Irish's book, One Ticket to Texas. Eve and her sister Irish are great heroine's and the couisin's they marry (who happen to belong to a millionaire's club) are great. These millionaire's are down to earth and funny, and the grandfather (Cerokee Pete) is hilarious. When he finds a woman that he thinks his grandson's should marry he offers them a million dollars to marry them (and he has it to give), in fact, that's all his grandkids got their start by his giving them a million dollars, and if they double it in the first year, he gives them 10 million (oil was found on his property).... You won't go wrong with either of these books. You will laugh and really enjoy the whole courtship.

Published by Thriftbooks.com User , 22 years ago
Matt Crow knew an angel when he saw one, and he saw one in Eve Ellison as she glided down the aisle of her sister's wedding. Now he just had to convince her that she was the woman for him. Pulling every string in the book to get her near him, Matt will use his charm and influence, and even a little good old-fashioned deceit, to win Eve's heart for his own. Would his plan backfire on him?Eve Ellison had always felt ugly sister next to her beautiful sister, Irish. So it came as a total surprise when the wealthy and incredible handsome Matt Crow seemed interested in her. It also came as a total surprise when she found herself falling in love with him, and he with her. It seemed almost too good to be true. And when she discovered Matt's little secret, Eve wasn't sure she'd ever love again. Will love triumph over all? Reigning princess of the light romance, Jan Hudson once again exhibits her incredible talent for mixing humor and romance in her latest release, "Plain Jane's Texan." Fans of her work will delight at this charming tale, and newcomers to her writing will beg for more.
Copyright © 2020 Thriftbooks.com Terms of Use | Privacy Policy | Do Not Sell My Personal Information | Accessibility Statement
ThriftBooks® and the ThriftBooks® logo are registered trademarks of Thrift Books Global, LLC