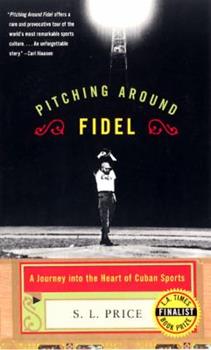 Pitching Around Fidel: A Journey into the Heart of Cuban Sports

In an artful pastiche of observation, personal narrative, interviews, and investigative reporting, S.L. Price, a senior writer for Sports Illustrated, describes sports and athletes in today's Cuba. On his journeys to the island, Price finds a country that celebrates sports like no other and a regime that uses games as both symbol and weapon in its dying revolution. He finds Olympic and world champion boxers, track stars, volleyball and baseball players,...

Published by Thriftbooks.com User , 19 years ago
Among sports books, Pitching Around Fidel is a rare thing: it is smart, honest, and beautifully written. With a novelist's eye for the telling detail and a breezy, engaging writing style, S.L. Price takes the reader on an amazing journey to another world -- the barely functioning sports machine of Fidel Castro's Cuba, circa late 1990s. Price writes with compassion about the sports heroes who dream about making it across the Florida Straits to America, where surely fame and fortune await them. Some of the most moving and heartbreaking moments of the book come when he introduces us to the wives and sons that the Cuban sports stars have left behind.Surely the best part of Pitching Around Fidel is Price's observation that Cuban sports are pure because it is one of the only places on earth whether one can find true amateur sports, where the only reward for a champion is a medal. But he also comes to realize that this pure ideal places a very heavy burden on the island nation's amateur sports stars, who are forever attempting to pitch and run (and even sail) around Fidel.

Published by Thriftbooks.com User , 20 years ago
If you're a sports fan this gives you a great look into a another world. It appears to be an even handed discussion of the good bad and ugly of Cuban sportsIts worth it.

Published by Thriftbooks.com User , 21 years ago
I first heard of this book in Sports Illistrated. It was very moving and very sad. All sports fans should read this and reflect on the differences between American sports and Cuban Sports. The dichotomy is ironic and tragic.

Published by Thriftbooks.com User , 21 years ago
I was moved to tears by S.L. Price's poignant and unique view into the Cuban life. S.L. clearly drew on his sincere personal interest in Cuban culture to gain unprecedented access to compelling figures like Teofilo Stevenson and Lazaro Valle. We all know about El Duque, but Valle's bittersweet story, recounted with giddy mirthful hilarity behiond a dilapidated garage, left a haunting impression of perhaps the world's greatest pitcher, reduced to sneaking change out of a waiter's tip. Sweet as lemon pie.

Published by Thriftbooks.com User , 22 years ago
In this period of Elian Gonzalez saturation, I was very pleased to learn of the book by S.L. Price. I was in graduate school at the time of the Bay of Pigs. I visited Cuba in 1979 for a period of 10 days. I have been an avid reader about the developments on the Island, before and after Castro. I cannot imagine anyone, however one feels about Castro or the Cuban revolution, not finding a mother lode of delightful information, commentary, annecdotes, etc., in Price's book. If one happens to be a sports fan, as I am, the book is doubly rewarding; to read of the tidbits about people like Canseco (who played in my hometown), Ordonez, Stevenson, et.al. Plus, the book gives the reader the context and texture of Cuba since Castro: its sights, its sounds, its people, and the extraordinary complexity of the issues involved in evaluating the success or failure of the revolution, or in assigning blame or fault for what has gone right, and for what has gone wrong. If I have a fault with Price's conclusion, it is in the nonjudgmental tone of the Postcript, where he says, "for me, the game is over. Castro's country is a place" as the cliche is about New York, to be visited, but no place to live. After all Price has seen heard and observed, and after his prodigious research, one would have expected him to say something more trenchant. I would at a minimum have expected him to wonder, however wistfully, what might the Cuban revolution have accomplished but for the implacable hostitlity of the United States. But alas, in the end, I suppose we are all patriots, though writers like Price seem to not understand that citizens of Cuba can also be patriots, however wierd that may appear to an American.
Trustpilot
Copyright © 2022 Thriftbooks.com Terms of Use | Privacy Policy | Do Not Sell My Personal Information | Accessibility Statement
ThriftBooks® and the ThriftBooks® logo are registered trademarks of Thrift Books Global, LLC