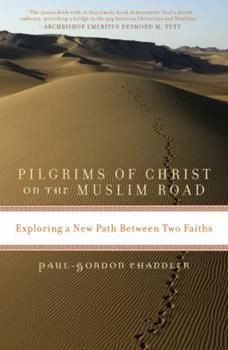 Pilgrims of Christ on the Muslim Road: Exploring a New Path Between Two Faiths

This completely revised and expanded edition of Brewers Publications' best-selling The Dictionary of Beer and Brewing presents 2,500 technical, historical, and cultural beer-related terms and definitions gathered from around the world. Each term and definition is concise, clear, up to date, and accompanied by pronunciation guides. They have all been checked for technical accuracy by historians and professionals in the brewing industry. Handy conversion...

Exactly what I've been looking for...

Published by Thriftbooks.com User , 14 years ago
Finally! A book that treats Muslims with respect and affection, and returns Christ to his original Middle Eastern roots. With love and intelligence, the author and Mallouhi show us practical ways of living peacefully with Islam. As an American Christian living in the Middle East, I've never been comfortable with the missionary approach of some Western christians. The section on assuming a "guest posture" among other faiths therefore had great resonance for me. My other favorite chaper gives the Middle Eastern context for many well-known Biblical texts. Who knew that "heaping burning coals" on your enemies heads (Proverbs) is in Bedouin culture a symbol of generosity, not vindictiveness? I loved this book. The message is not new -- that as followers of Christ we should all seek to be more Christ-like in the way we treat others. But here, beautifully told through the life of a unique individual, it takes on a fresh urgency.

Published by Thriftbooks.com User , 14 years ago
Reviewed by Linda Benninghoff for Reader Views (10/07) In "Pilgrims of Christ on the Muslim Road," Paul Gordon Chandler is writing a book that may help bridge the gap between Eastern and Western faiths--using the life-story of Mazhar Mahlhoui, a novelist who grew up a Sufi in Syria, but who became a follower of Christ, whose novels interpret Christianity in a way to make it understandable and acceptable to Muslims. Gordon heightens the difference between true and false Christianity, and outlines the difficulties of Muslims who embrace the way of Christ. When Mazhar first comes to believe in Christ, his family rejects him. His uncle tries to kill him. What Mazhar has done seems unthinkable, a rejection of their way of life. Christianity has become associated with the west for Arabs, and the West's attempts to achieve hegemony. Western Christianity is not the same as the way of life practiced by Christ--and too often is accompanied by materialism and violence toward Arabs. Mazhar feels that the Bible is a book of Eastern culture, and can be better understood from that point of view. After Mazhar leaves Syria he makes a long pilgrimage through various countries, including Morocco, Tunisia, the U.S. (where he is educated and marries) and eventually settles in Beirut. When he attempts to return to Syria he is put in jail and deported. He does see his family, and they accept him. His attitude toward the Muslim faith is by now less hostile and his family welcomes him. The book clearly demonstrates the hostility of Arabs toward Christians, although Christ is recognized as a prophet by Mohammedans. Western violence and dominance in the Middle East seems to have turned Arabs completely against Christianity. The book suggests Ghandi was a true Christian, although he did not convert, but was a follower of the life of Christ. Mazhar, who attempts to share his Christianity with the Muslim world, also figures as a true Christian facing many life-threatening situations in the pursuit of his faith. While Mazhar and his community retain their Muslim culture but follow the life of Christ, this will not be easy for all Muslims. Yet it is up to the west to reexamine its attitudes toward Muslims and to rethink its own Christianity. What is the true Christianity? "Pilgrims of Christ on the Muslim Road" helps answer that question. Innovative, readable and timely, it also suggests a way that East and West can be bridged.

Jesus in an eastern robe...

Published by Thriftbooks.com User , 14 years ago
I'm glad to say that I know Mazhar, the focus of this biography/study/journey. When I first heard that Paul-Gordon Chandler was writing this book, I was concerned that it would be hagiography rather than a realistic portrait. However, as I read this book I found myself nodding at the portrayal, remembering many of Mazhar's challenging sayings and enlightening stories that Chandler reports. There is plenty of detail here that fills in things I was unaware of from Mazhar's past. But the overall picture is clear, the picture of a devotee, "a lover of God" on the path of Christ, seeking to live out his life in true freedom in spite of the misunderstandings of some of those around him. There are readers who may misunderstand the picture being presented here, seeing it as a universalist, everyone-will-go-to-heaven sort of thing. Mazhar is very clear in presenting the incredible value of knowing Jesus as Messiah and Lord, and following him through the joys and challenges of life. He is also strongly committed to his Arab Muslim culture and civilization. Some Westerners will find it hard to understand and value Mazhar's faith, wrapped and shrouded as they are within the dusty folds of age-old Western Christian interpretations, traditions and practices. Many Westerners are surprised at how highly Muslims respect and venerate Jesus Christ. But the stories in this book are true...there is a large body of Muslims who are excited to hear about Jesus and his teachings when they are not tied to Western politics and religious systems. They would like to know how they can emulate Jesus and the prophets and put his teachings into practice. This book is a wonderfully eye-opening look at spiritual dynamics in the Middle East, framed outside of the "conflict model" of Muslim versus Christian.

Published by Thriftbooks.com User , 14 years ago
Never before has the subject of cultural understanding been so important. This book crushes Western stereotypes of Islamic and Arab culture and gives life/death insight into the opportunity we have to provide a peaceful future. Many people have ideas, but few have the experience to make their ideas relevant. The "Pilgrims" of this book are men and women who have paid a high price to forge a viable path between Islam and those that follow Jesus Christ. No matter what your religious, cultural, or political background, you will be impacted by this book.

The Most Important Book for Christians & Muslims Alike

Published by Thriftbooks.com User , 14 years ago
There has never been a book like this for Muslims and Christians alike. It is a stand alone and a must read. Why have I never heard of Mazhar Mallouhi? I did realize I've read a book by his wife Christine a few years ago. He does for us what E. Stanley Jones did for us with India and Hindu's. The principles of this book can be applied to any culture or context. Once you pick it up, it will be very difficult to put it down. What makes it so powerful is that it isn't about western missiology, or a Middle-Eastern convert from Western Christians, but a man who finds God by seeking for him on his own. There is not a more significant issue in the world today than how Christians and Muslims view one another and relate. This book will go a long way toward promoting that. It's a fast paced narrative filled with principles and lessons. Having worked around the world with the "powers that be" this book is a must read. I'll be making copies available for young pastors and immams alike. Thank you Thank you thank you Paul-Gordon Chandler for your book. Mazhar, may peace be upon you - thank you for teaching me so much - I will be indebted to you for it. Bob Roberts - Auhor, Transformation, Glocalization, and soon to be realsed The Multiplying Church.
Trustpilot
Copyright © 2022 Thriftbooks.com Terms of Use | Privacy Policy | Do Not Sell My Personal Information | Accessibility Statement
ThriftBooks® and the ThriftBooks® logo are registered trademarks of Thrift Books Global, LLC