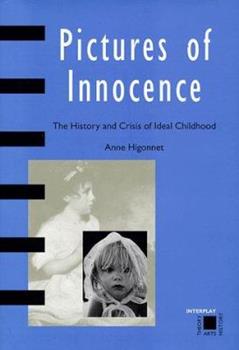 Pictures of Innocence: The History and Crisis of Ideal Childhood

The ideal of childhood innocence is perhaps the most cherished concept of modern culture, all the more so because it seems to be under siege. This book explores the images that are at once the most common, the most sacred, and the most controversial of our time, ranging from 18th-century portraits by Sir Joshua Reynolds to greeting cards by Anne Geddes, from the ambiguous photographs of Lewis Carroll to those of Sally Mann.

Published by Thriftbooks.com User , 13 years ago
Pictures of Innoncence is a softcover book with over 250 pages containing nine seperate chapters broken down into two parts and illustrated with about 100 photos with eight of which are in color. The chapter breakdowns are follow: Part I THE INVENTION OF INNONCENCE Chapter 1: The Romantic Child Chapter 2: Every Mother's Child Chapter 3: A Golden Age Chapter 4: Innocence Inherited Chapter 5: Snapshot Families Part II AN IDEAL IN CRISIS Chapter 6: Through the Looking Glass Chapter 7: Private Pictures, Public Dangers Chapter 8: Photographs Against the Law Chapter 9: Knowing Child Whether you agree or not with Anne Higonnet's assertions, her book at least displays an earnest and detailed attempt at examining a very volatile and delicate subject at this moment in history. In the early chapters, the auther sites many works of paintings as well as authors from the 19th century to illustrate her point. In the later chapters, she goes into some legal cases from the later half of the 20th century. Detailed, well-illustrated, and perhapes a bit controversial this book presents the reader a chance to have an open discussion about a subject that many find uncomfortable. In a free society, its citizens should have the ability to shine a light on a topic and perhaps one day set it free, this book is one possible avenue to begin that exploration.

Published by Thriftbooks.com User , 14 years ago
I think it's only fair to warn people that the text of this book may be a difficult read for some people, as it's very academic. I have a heavy interest in unconventional ideas about children, as I'm a mother myself and am increasingly becoming concerned about the hysterical child protection movement which seems to be shouting from all corners these days. When this book first came, I struggled with it, put it aside and left it for a while, even though I really wanted to understand it. A year later, after refining my other heavy interest -philosophy- which can also be very difficult to read, I came back to this book and found that I understood it perfectly. Now, I went to a lousy school which didn't teach science, English grammar, or even algebra by the time I left in the second year of high school at 15, so if I can comprehend this book, ANYONE can with a little patience. That said, this is my favourite book at the moment. It's message -that our old image of the "innocent" child is a product of our own construction- is very timely and important. The author has a needle-sharp mind like I've never come across before and her social observations are almost always spot on. There is a depth to this book that makes it a read worth experiencing. When the author asks, while analyzing "Making a train": Is this girl sexy BECAUSE of her innocence? She's hitting a nerve. By portraying children as "weak" and "innocent" we are making them the ultimate image of trustworthiness and therefore very sexually appealing. We can adore them because they can't betray us, we can love them because they can't hurt us. Sexuality flourishes in the context of trust and freedom from fear of being betrayed or hurt, and children are the ultimate trustworthy person. They can't hurt us, because they are "innocent". But are they? The author believes that a revolution is taking place, and that the image of the "knowing" child is fighting up against the "innocent" child image. However, this is where I feel that she may be wrong. I believe that the image that is really taking over is the image of the "sexual" child. I know that the author would call this "sexualization" a product of the "innocence" child image and an extension of it, rather than a revolution, however, the old image still didn't acknowledge this sexuality openly, and I believe that the new images do. The "sexual" child image portrays a child who is innocent in every way except for it's innate sexual allure -in a world where sex is for pleasure, no longer for reproductive purposes, the child is being portrayed as being able to provide sexual pleasures greater than an adult can give us. Just look around you at the advertising, media, music and the fact that there are mini-skirts for one year olds. However, it's far too simplistic to claim that children are being sexualized alone because of their "weakness", the subject needs much more complex discussion then that. That's why we should read this book and think about wha

Higonnet is smart, but she's wrong on the law

Published by Thriftbooks.com User , 24 years ago
There' a lot to recommend this book: Higonnet has you exercising your critical judgment on a plethora of everyday images, new and antiquarian, even if you disagree with her analysis.However, readers should be aware that the author substantially misstates the law in several places. She cites some interpretive dicta from a district court case in California (US v. Dost) as being the actual text of the federal law. The federal law isn't nearly as vague as she suggests. Moreover she says that the Child Pornography Prevention Act of 1995 criminalized depictions of breasts and buttocks of minors. Untrue. The final bill passed deleted these provisions. These are serious omissions to a sensitive discussion.Lawrence A. Stanley, Esq. NY, NY
Trustpilot
Copyright © 2022 Thriftbooks.com Terms of Use | Privacy Policy | Do Not Sell My Personal Information | Cookie Preferences | Accessibility Statement
ThriftBooks® and the ThriftBooks® logo are registered trademarks of Thrift Books Global, LLC