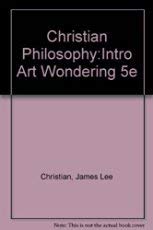 Philosophy: An Introduction to the Art of Wondering

Whether it's cartoons, quotations, or interesting anecdotes from related fields, you've never seen a more interesting philosophy textbook than this one. PHILOSOPHY: AN INTRODUCTION TO THE ART OF WONDERING explains the central concepts of philosophy in ways you can understand by showing how it's all connected. And best of all, this philosophy textbook helps you develop the analytical skills you need to critically engage the "big picture" of Western...

Dr. Christian, Wherever You Are~

Published by Thriftbooks.com User , 14 years ago
I had the privilege of taking one of your philosophy courses 40 years ago and then a couple more 16 years later. When I was 19 (I am now almost 60), I stood up in your class and angrily stated, "What right do you have to take away other people's faith?!!" As I said to you about ten years ago, you took away my faith and gave me a much more interesting and wonderful life. You may have given us just 'pablum' but you can't spark interest in whole food in an infant, and we were infants. You -- and your books -- changed the lives of many of us, and we went on to become life-long "Seekers of Wisdom" -- and I will always be most grateful. I am now retired and live in one of the most spiritual places in the world, New Mexico. Wherever you are, I think of you often, I think of you with much gratitude, and I keep you and Huston Smith in my prayers -- to what God? I don't know. Isn't that wonderful? Love, Barbara

Published by Thriftbooks.com User , 15 years ago
Dr. Christian is a genius in the way he communicates wisdom and inquiry into what he calls "the art of wondering" to students. I was lucky to have him as a teacher. A great book. A great man.

An excellent overview of philosophy for everyone!

Published by Thriftbooks.com User , 16 years ago
I am delighted to be able to recommend Dr. Christian's 9th edition of his classic "Philosophy: An Introduction to the Art of Wondering" to all those interested in uncovering what the study of formal philosophy is all about. While this textbook is primarily targeted toward college students engaged in their first confrontation with the discipline of philosophical thought, I think it is also an excellent introduction for the philosophically-inclined high school student and the mature adult who wants to involve himself or herself in continuing self-education. I used the 2nd edition of this textbook with my students in an introductory course in philosophy which I taught back in the 1970s. I thought the textbook was excellent then; it is even better now with some added features not in the edition I used. This is not your all-too-common dry, dull philosophy textbook. One of the things stressed in Christian's book is that the study of philosophy is not so much a matter of subject-matter or content as it is an "intellectual adventure," a practical pursuit, a dynamic enterprise, something one "does" rather than simply study some static material with little relevance to daily life. "By its very nature," according to Christian, "philosophy is a do-it-yourself enterprise." Furthermore, "Philosophy...is a method" and "Doing philosophy is an endless activity." How true that is! I have been "doing" serious philosophy since I was about fourteen years old, much to the discomfort of many of my high school teachers. So difficult was I in asking vexing questions of the teacher, that once I was simply told to "Sit down and shut up, or get out!" (Well, philosophers and serious students of philosophy have never been particularly popular or welcome during their lifetimes. Goes with the territory, one might say.) One of the major benefits of "Philosophy: An Introduction to the Art of Wondering" is Christian's "attitude" toward the philosophical enterprise. He "promotes," so to speak, what he calls "synoptic" philosophy; this is a "seeing" of the "whole together," that is, philosophy as a world-view, a consideration of the "big picture." There is not a single facet of the human condition that is not touched upon by the philosophical thinker. This is in sharp contrast to much of what has occurred in recent academic "philosophy," where so-called "philosophers" have reduced the study of philosophy to a mere "playing with words" or "intellectual gamesmanship." Out went metaphysics and its questions (they were pronounced "nonsense"); serious problems in ethics or moral philosophy were cast aside (they were simply a matter of emotions or sentiments, not of principle and truth); what was left for philosophy was mostly symbolic logic and the "analysis" of terms. No wonder professional philosophical thought went into a "dark age" during much of the 20th century and students thought that the study of philosophy itself was a waste of time and constituted a mere quibbling over the u

I had the pleasure of taking Mr. Christain's course

Published by Thriftbooks.com User , 17 years ago
And, of course, we used his text book for the course. If there was one word that I would think most describes this book, it would "unbiased", so I don't really know what that previous reviewer was talking about (maybe Christainity?). Anyway, I found this book to be very funny, interesting, thoughtprovoking, and the only thing really wrong with it is that we don't know the answers to almost any really revelant question. But, I agree, and I think James would say, that that doesn't mean we shouldn't think about them.
Trustpilot
Copyright © 2022 Thriftbooks.com Terms of Use | Privacy Policy | Do Not Sell or Share My Personal Information | Accessibility Statement
ThriftBooks® and the ThriftBooks® logo are registered trademarks of Thrift Books Global, LLC